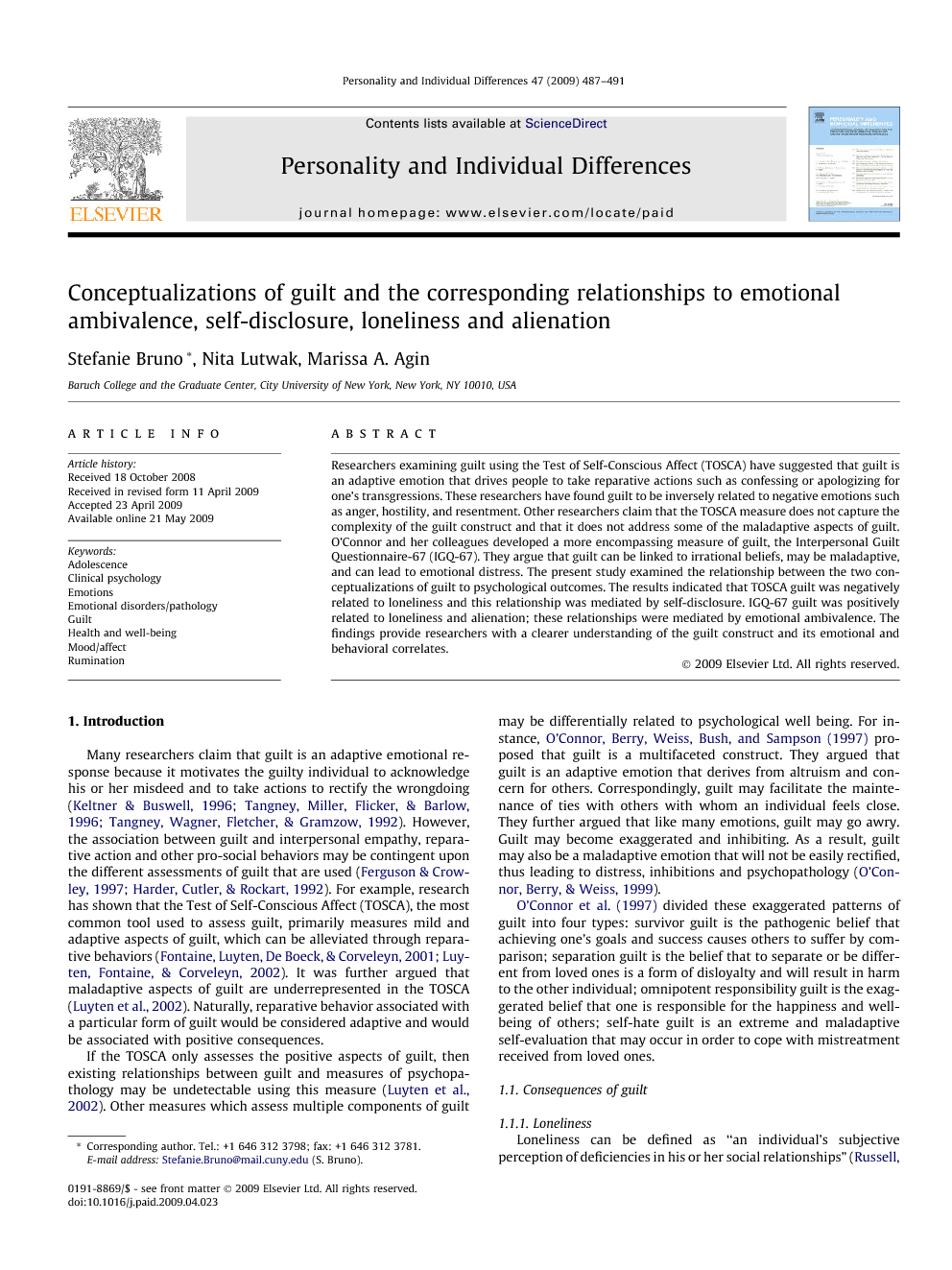 Researchers examining guilt using the Test of Self-Conscious Affect (TOSCA) have suggested that guilt is an adaptive emotion that drives people to take reparative actions such as confessing or apologizing for one’s transgressions. These researchers have found guilt to be inversely related to negative emotions such as anger, hostility, and resentment. Other researchers claim that the TOSCA measure does not capture the complexity of the guilt construct and that it does not address some of the maladaptive aspects of guilt. O’Connor and her colleagues developed a more encompassing measure of guilt, the Interpersonal Guilt Questionnaire-67 (IGQ-67). They argue that guilt can be linked to irrational beliefs, may be maladaptive, and can lead to emotional distress. The present study examined the relationship between the two conceptualizations of guilt to psychological outcomes. The results indicated that TOSCA guilt was negatively related to loneliness and this relationship was mediated by self-disclosure. IGQ-67 guilt was positively related to loneliness and alienation; these relationships were mediated by emotional ambivalence. The findings provide researchers with a clearer understanding of the guilt construct and its emotional and behavioral correlates.

Many researchers claim that guilt is an adaptive emotional response because it motivates the guilty individual to acknowledge his or her misdeed and to take actions to rectify the wrongdoing (Keltner and Buswell, 1996, Tangney et al., 1996 and Tangney et al., 1992). However, the association between guilt and interpersonal empathy, reparative action and other pro-social behaviors may be contingent upon the different assessments of guilt that are used (Ferguson and Crowley, 1997 and Harder et al., 1992). For example, research has shown that the Test of Self-Conscious Affect (TOSCA), the most common tool used to assess guilt, primarily measures mild and adaptive aspects of guilt, which can be alleviated through reparative behaviors (Fontaine et al., 2001 and Luyten et al., 2002). It was further argued that maladaptive aspects of guilt are underrepresented in the TOSCA (Luyten et al., 2002). Naturally, reparative behavior associated with a particular form of guilt would be considered adaptive and would be associated with positive consequences. If the TOSCA only assesses the positive aspects of guilt, then existing relationships between guilt and measures of psychopathology may be undetectable using this measure (Luyten et al., 2002). Other measures which assess multiple components of guilt may be differentially related to psychological well being. For instance, O’Connor, Berry, Weiss, Bush, and Sampson (1997) proposed that guilt is a multifaceted construct. They argued that guilt is an adaptive emotion that derives from altruism and concern for others. Correspondingly, guilt may facilitate the maintenance of ties with others with whom an individual feels close. They further argued that like many emotions, guilt may go awry. Guilt may become exaggerated and inhibiting. As a result, guilt may also be a maladaptive emotion that will not be easily rectified, thus leading to distress, inhibitions and psychopathology (O’Connor, Berry, & Weiss, 1999). O’Connor et al. (1997) divided these exaggerated patterns of guilt into four types: survivor guilt is the pathogenic belief that achieving one’s goals and success causes others to suffer by comparison; separation guilt is the belief that to separate or be different from loved ones is a form of disloyalty and will result in harm to the other individual; omnipotent responsibility guilt is the exaggerated belief that one is responsible for the happiness and well-being of others; self-hate guilt is an extreme and maladaptive self-evaluation that may occur in order to cope with mistreatment received from loved ones.