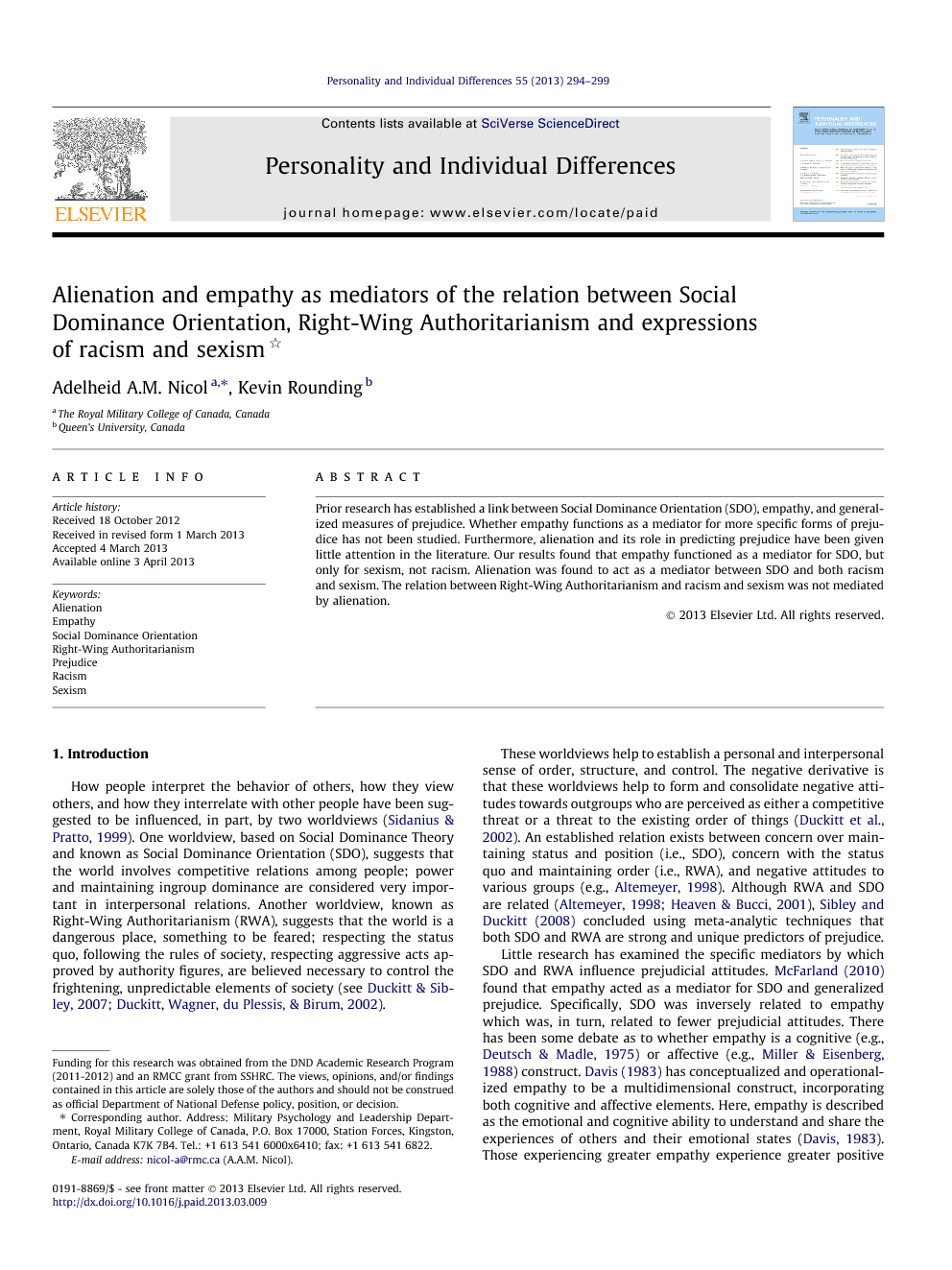 Prior research has established a link between Social Dominance Orientation (SDO), empathy, and generalized measures of prejudice. Whether empathy functions as a mediator for more specific forms of prejudice has not been studied. Furthermore, alienation and its role in predicting prejudice have been given little attention in the literature. Our results found that empathy functioned as a mediator for SDO, but only for sexism, not racism. Alienation was found to act as a mediator between SDO and both racism and sexism. The relation between Right-Wing Authoritarianism and racism and sexism was not mediated by alienation.

How people interpret the behavior of others, how they view others, and how they interrelate with other people have been suggested to be influenced, in part, by two worldviews (Sidanius & Pratto, 1999). One worldview, based on Social Dominance Theory and known as Social Dominance Orientation (SDO), suggests that the world involves competitive relations among people; power and maintaining ingroup dominance are considered very important in interpersonal relations. Another worldview, known as Right-Wing Authoritarianism (RWA), suggests that the world is a dangerous place, something to be feared; respecting the status quo, following the rules of society, respecting aggressive acts approved by authority figures, are believed necessary to control the frightening, unpredictable elements of society (see Duckitt and Sibley, 2007 and Duckitt et al., 2002). These worldviews help to establish a personal and interpersonal sense of order, structure, and control. The negative derivative is that these worldviews help to form and consolidate negative attitudes towards outgroups who are perceived as either a competitive threat or a threat to the existing order of things (Duckitt et al., 2002). An established relation exists between concern over maintaining status and position (i.e., SDO), concern with the status quo and maintaining order (i.e., RWA), and negative attitudes to various groups (e.g., Altemeyer, 1998). Although RWA and SDO are related (Altemeyer, 1998 and Heaven and Bucci, 2001), Sibley and Duckitt (2008) concluded using meta-analytic techniques that both SDO and RWA are strong and unique predictors of prejudice. Little research has examined the specific mediators by which SDO and RWA influence prejudicial attitudes. McFarland (2010) found that empathy acted as a mediator for SDO and generalized prejudice. Specifically, SDO was inversely related to empathy which was, in turn, related to fewer prejudicial attitudes. There has been some debate as to whether empathy is a cognitive (e.g., Deutsch & Madle, 1975) or affective (e.g., Miller & Eisenberg, 1988) construct. Davis (1983) has conceptualized and operationalized empathy to be a multidimensional construct, incorporating both cognitive and affective elements. Here, empathy is described as the emotional and cognitive ability to understand and share the experiences of others and their emotional states (Davis, 1983). Those experiencing greater empathy experience greater positive attitudes towards individuals from various stigmatized groups (Batson et al., 1997) as well as greater prosocial and cooperative behaviors (Eisenberg & Miller, 1987). Being able to take another’s perspective may be a key element in reducing prejudice (Andreychik & Gill, in press). Indeed, perspective-taking, one component of empathy, was associated with decreased prejudice and discriminatory behaviors (Galinsky and Moskowitz, 2000 and Shih et al., 2009). It seems that to be concerned with taking another individual’s feelings into account and sharing their emotional state is in contradiction with the desire to maintain higher status and separation with outgroup members, a critical feature of high SDOs. Similarly, previous research suggests that alienation may be related to SDO (Nicol, 2007). Alienation is the extent to which a person feels a sense of belonging to various elements of social life (Hajda, 1961). People who experience alienation disengage from society and from themselves (Simmons, 1966), thus experience less emotional attachment and involvement to their workplace (Efraty et al., 1991 and Hirschfeld et al., 2000), and greater hostility (Tolor & LeBlanc, 1971). Luke and Maio (2009) found alienation to be significantly negatively correlated with a person’s evaluation of humanity, the extent to which a person views human beings as valuable, useful, and good. Because SDO measures perceptions of superiority over outgroup members, we would expect those scoring high on SDO to also experience more interpersonal – and possibly intrapersonal – alienation, as social relations are meaningful and valuable only to the extent that one wishes to interrelate with others on the same plane. Bobo and Hutchings (1996) found that individuals who experienced racial alienation would perceive outgroup members as competitors (viewing others as competitors is related to the SDO worldview). Nicol (2007) found that individuals with high SDO scores had higher alienation scores, suggesting that they do not perceive relationships with other people and social institutions as meaningful. We found no research directly examining the relation of alienation with negative attitudes towards outgroups, however, its association with hostility, and intolerance of human frailty (McClosky & Schaar, 1965) suggest there may be a relation with prejudice. If an individual is primarily concerned with maintaining hierarchical distance and privilege, then they may become alienated from others and from themselves, this may consequently influence attitudes towards others. With regards to RWA, researchers have suggested that alienation may be correlated with Authoritarianism (Dean, 1961 and Knapp, 1976). Sexton (1983) found a significant correlation between alienation and dogmatism. McClosky and Schaar (1965) found alienation to be associated with rigidity and intolerance with ambiguity which are conceptually related with RWA’s dangerous worldview motivational foundation (Duckitt & Sibley, 2007). If fear is a primary motivational drive for those scoring high on RWA, they may feel more alienated from people and themselves, resulting in stronger negative attitudes towards others. In contrast, Nicol (2007) directly examined and found no evidence for an RWA-alienation relationship. Given the minimal amount of research, we tested the hypothesis that alienation would function as a mediator between RWA and racism and sexism.