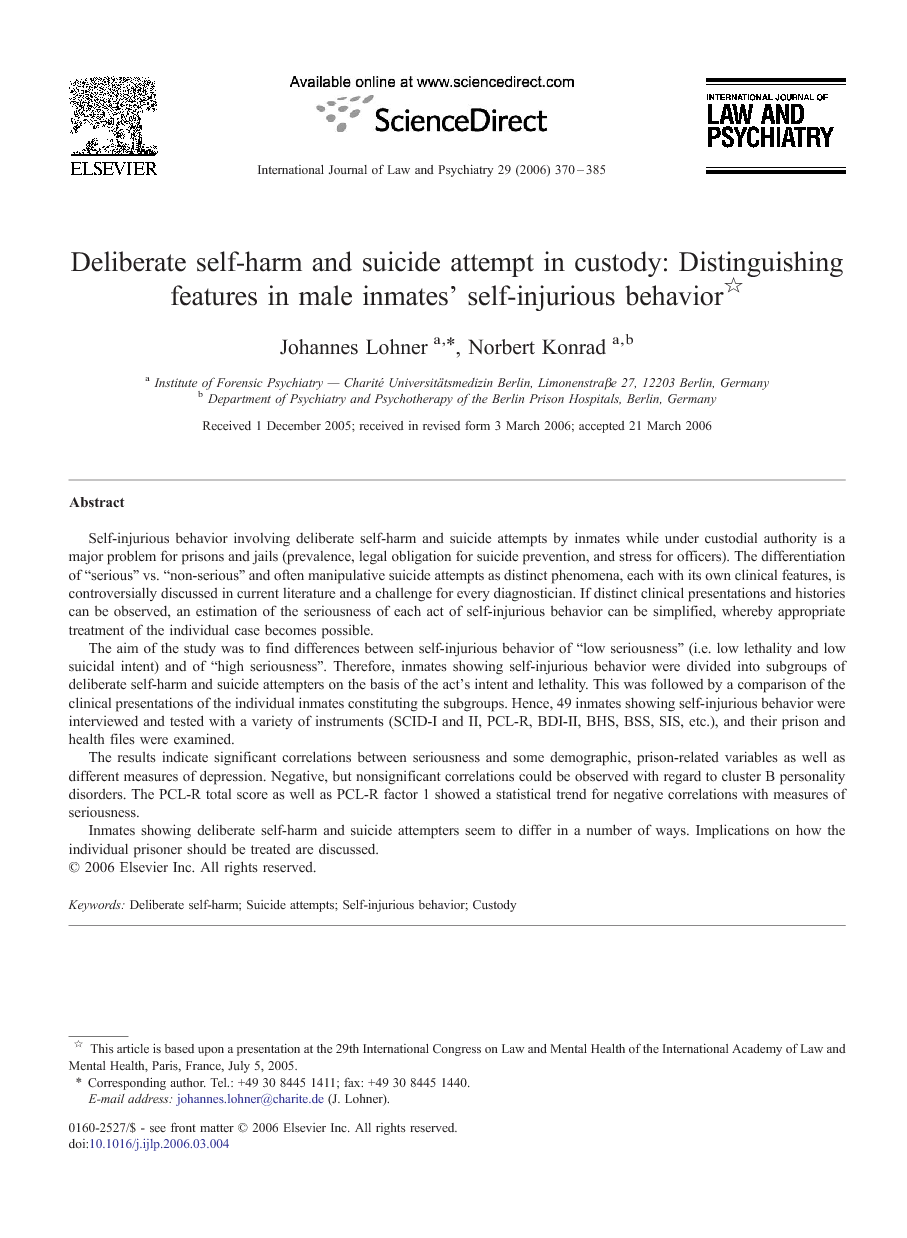 Self-injurious behavior involving deliberate self-harm and suicide attempts by inmates while under custodial authority is a major problem for prisons and jails (prevalence, legal obligation for suicide prevention, and stress for officers). The differentiation of “serious” vs. “non-serious” and often manipulative suicide attempts as distinct phenomena, each with its own clinical features, is controversially discussed in current literature and a challenge for every diagnostician. If distinct clinical presentations and histories can be observed, an estimation of the seriousness of each act of self-injurious behavior can be simplified, whereby appropriate treatment of the individual case becomes possible. The aim of the study was to find differences between self-injurious behavior of “low seriousness” (i.e. low lethality and low suicidal intent) and of “high seriousness”. Therefore, inmates showing self-injurious behavior were divided into subgroups of deliberate self-harm and suicide attempters on the basis of the act's intent and lethality. This was followed by a comparison of the clinical presentations of the individual inmates constituting the subgroups. Hence, 49 inmates showing self-injurious behavior were interviewed and tested with a variety of instruments (SCID-I and II, PCL-R, BDI-II, BHS, BSS, SIS, etc.), and their prison and health files were examined. The results indicate significant correlations between seriousness and some demographic, prison-related variables as well as different measures of depression. Negative, but nonsignificant correlations could be observed with regard to cluster B personality disorders. The PCL-R total score as well as PCL-R factor 1 showed a statistical trend for negative correlations with measures of seriousness. Inmates showing deliberate self-harm and suicide attempters seem to differ in a number of ways. Implications on how the individual prisoner should be treated are discussed.

Deliberate self-harm (DSH) and suicide attempts (SA) among custodial inmates (grouped together under the term self-injurious behavior SIB) are a serious problem for the penal authorities. On the one hand, SIB is a relatively frequent phenomenon in prisons. US prevalence rates range from 1380 cases per 100,000 average daily population (ADP) (≈ 1.4%; Sloane, 1973) to 2200/100,000 ADP (= 2.2%; Goss, Peterson, Smith, Kalb, & Brodey, 2002) up to 3760/100,000 ADP (≈ 3.8%; Toch, 1975). Sloane (1973) assumes a rate of 3.2% for remand prisoners compared to 1.4% for sentenced prisoners. In the literature, Shea (1993) found prevalence rates of 6.5% to 25% for male prisoners. The differences in values can be explained by the various definitions of SIB, different study populations and the lack of registration of SIB. Holley and Arboleda-Flórez (1988) reported figures from Canada, in which 50% of all prisoner showed SIB, although “only” 10% were at risk of suicide. Since the prison population represents a special group of the general population as to demographic and biographic factors (e.g. age, sex, etc.), it is initially difficult to compare suicide and suicide attempt rates in custody to those in the general population. Nevertheless, if prison-specific characteristics of a prison sample are controlled, rates in prison seem to be considerably higher than those in the general population (Cooper and Berwick, 2001 and Jenkins et al., 2005). On the other hand, acts of SIB, despite their relatively frequent occurrence, are not a common event for a person's environment but rather a burden that mobilizes elementary reactions of shock and fear (Herpertz & Saβ, 1994) and mainly leaves the prison personnel helpless. The general suspicion of manipulation often voiced towards inmates showing SIB can incidentally also be understood as a defense against unpleasant feelings and a rationalization of the unexplainable behavior of another. Another reason why SIB is a serious problem for custodial authorities is due to the fiduciary duty of the penal system towards its inmates. Since imprisonment is recognized as a stressor and considered one of the causes of SIB among inmates (Biggam and Power, 1999, Harding and Zimmermann, 1989 and Haycock, 1989), penal institutions are obligated according to §§ 3, article 2 and 56, article 1 of the German penal code (StVollzG) to counteract detrimental consequences of imprisonment and to keep prisoners physically and mentally healthy (Dahle et al., 2005, Frühwald et al., 2003, Goss et al., 2002 and O'Leary, 1989). This seems to be particularly indicated in light of the fact that both DSH and SA are considered risk factors for a possible suicide (Frühwald et al., 2003). Farmer, Felthous, and Holzer (1996) remind us in this context that 15% of the suicide attempters ultimately succeed. According to Owens, Horrocks, and House (2002), 5% of the inmates showing SIB commit suicide within 9 years after the SIB, increasing their suicide risk 100-fold compared to the general population. Another basic problem is the differentiation between “serious” and “non-serious” SA. Particularly prison employees required a reliable differentiation (Dear, Thomson, & Hills, 2000). At the root of this request is the assumption that most acts of SIB are carried out with the intention of manipulating the personnel (Haycock, 1989), a belief fed by the self-report of the inmates. According to Haycock (1989), the secondary gain of SIB is nowhere greater than in prison or the military. The employees' attitude towards inmates with SIB is also supported by Rieger (1971), who put “suicide attempt” in quotes in order to express his doubts about the true self-destructive quality of SIB among inmates. Based on his study of Freud's writings, he comes to the conclusion that sociopaths have no suicidal intentions and calls their SIB “suicidal gestures” (this time without the quotes), just another facet of their manipulative behavior. Moreover, Haycock (1989) mentions the widespread preconception that whoever really wanted to kill himself would simply do it; therefore, those who only attempt suicide have no death wish. Hence, there is an implicit connection between suicidal intent and the lethality of SIB. Haycock (1989) as well as Power and Spencer (1987) deny the existence of such a connection, but Beck, Kovacs, and Weissman (1975) recognized this in the general population for acts of SIB, if the subjects' knowledge of the possible medical risks of their behavior are recorded and controlled. It should be critically mentioned that the studies of Haycock (1989) and Power and Spencer (1987) did not include this control, which may be a reason for the low correlation between suicidal intent and the degree of injuries. Moreover, Haycock's (1989) study , just as a number of other studies, can be criticized for an unclear definition of SIB — DSH and SA seem to be interchangeable. It has not yet been completely clarified whether a reliable assignment to the DSH or SA group can be made in the individual case. Ascertaining the seriousness of SIB only by lethality also seems to be questionable concerning of the limited availability of suicide methods in prisons (Cooper, 1971, Dittmann and Reimer, 1991, Livingston, 1997 and Lloyd, 1990). Therefore, seriousness should be covered by two dimensions: