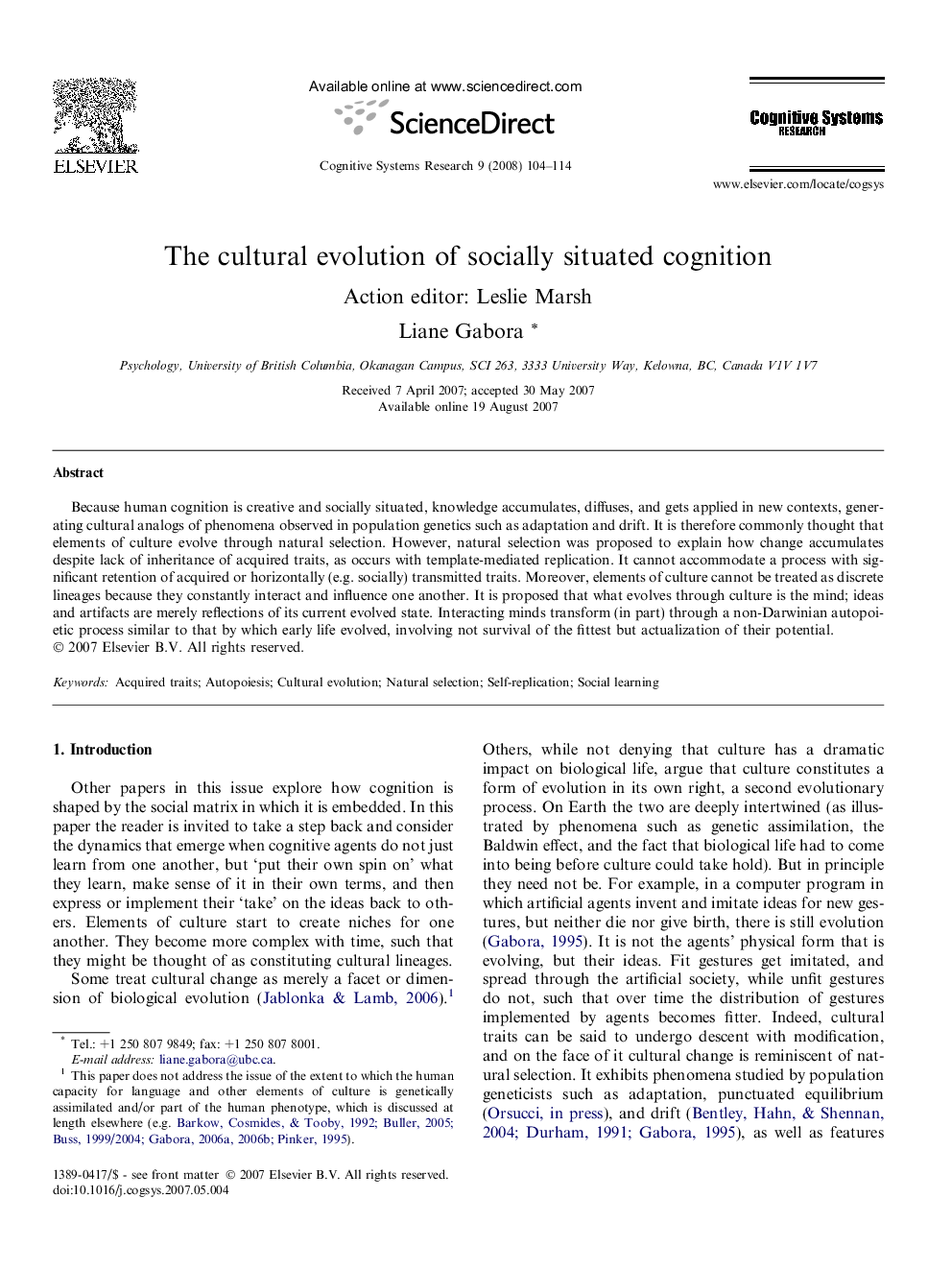 Because human cognition is creative and socially situated, knowledge accumulates, diffuses, and gets applied in new contexts, generating cultural analogs of phenomena observed in population genetics such as adaptation and drift. It is therefore commonly thought that elements of culture evolve through natural selection. However, natural selection was proposed to explain how change accumulates despite lack of inheritance of acquired traits, as occurs with template-mediated replication. It cannot accommodate a process with significant retention of acquired or horizontally (e.g. socially) transmitted traits. Moreover, elements of culture cannot be treated as discrete lineages because they constantly interact and influence one another. It is proposed that what evolves through culture is the mind; ideas and artifacts are merely reflections of its current evolved state. Interacting minds transform (in part) through a non-Darwinian autopoietic process similar to that by which early life evolved, involving not survival of the fittest but actualization of their potential.

Other papers in this issue explore how cognition is shaped by the social matrix in which it is embedded. In this paper the reader is invited to take a step back and consider the dynamics that emerge when cognitive agents do not just learn from one another, but ‘put their own spin on’ what they learn, make sense of it in their own terms, and then express or implement their ‘take’ on the ideas back to others. Elements of culture start to create niches for one another. They become more complex with time, such that they might be thought of as constituting cultural lineages. Some treat cultural change as merely a facet or dimension of biological evolution (Jablonka & Lamb, 2006).1 Others, while not denying that culture has a dramatic impact on biological life, argue that culture constitutes a form of evolution in its own right, a second evolutionary process. On Earth the two are deeply intertwined (as illustrated by phenomena such as genetic assimilation, the Baldwin effect, and the fact that biological life had to come into being before culture could take hold). But in principle they need not be. For example, in a computer program in which artificial agents invent and imitate ideas for new gestures, but neither die nor give birth, there is still evolution (Gabora, 1995). It is not the agents’ physical form that is evolving, but their ideas. Fit gestures get imitated, and spread through the artificial society, while unfit gestures do not, such that over time the distribution of gestures implemented by agents becomes fitter. Indeed, cultural traits can be said to undergo descent with modification, and on the face of it cultural change is reminiscent of natural selection. It exhibits phenomena studied by population geneticists such as adaptation, punctuated equilibrium (Orsucci, in press), and drift (Bentley et al., 2004, Durham, 1991 and Gabora, 1995), as well as features referred to by Mesoudi, Whiten, and Laland (2004) as “key Darwinian properties”, including variation, competition, and inheritance. Cultural change is also cumulative; humans have a propensity to not just generate novelty but build on it cumulatively, adapting old ideas to new circumstances (the Ratchet effect). One individual modifies the basic idea of a cup by giving it a flat enough bottom to stay put when not in use, another adds a handle, making it easier to grasp, and yet another adds a spout, making it easier to pour from. Moreover, this cumulative change is adaptive. With each instantiation, the basic idea remains the same but the details change to make it more useful with respect to the prevailing situation or need. It is also complex and open-ended; there is no limit to the cultural novelty that can be generated. This paper attempts to answer the question of whether the transmission and transformation of information across individuals occurs through a Darwinian process, and in what sense (if any) culture can rightly be said to ‘evolve’. We begin by examining why organisms do not inherit acquired characteristics, and how this impacts their evolution. This is key because acquired change is inherited in culture, 2 though note that here ‘inherited’ merely means transmitted or ‘passed on’ without implying genetic mediation.

The human capacity to exchange and build on one another’s ideas has completely transformed this planet. It is tempting to describe the process of cultural change in Darwinian terms, in part because (1) the parallels between biology and culture are striking, and (2) Darwin’s theory had a profoundly unifying effect on biology. Indeed Mesoudi et al. (2004) rightly assert that culture exhibits “key Darwinian properties”. But having these properties does not imply that the mechanisms are similar, and they are not; indeed the paradox that necessitated the theory of natural selection in biology does not exist with respect to culture. Early biologists were motivated by the need to explain how change accumulates in a domain where acquired traits are not retained at the individual level. Selection theory was accordingly designed to describe descent with modification at the population level, in organisms that do not inherit acquired characteristics because they are von Neumann self-replicating automata. Self-replicating automata use a self-assembly code that is both actively transcribed to produce a new individual, and passively copied to ensure that the new individual can itself reproduce. Cultural traits and artifacts are not self-replicating automata, even those such as a village plan that contain a code, because the code consists of instructions for how to generate something else, not a copy of itself. They are allopoietic, not autopoietic. In culture there is no inheritance of acquired traits—the effects of creative modification or contextual interaction with the environment are retained. So cultural theorists do not share the biologists’ need to explain how change occurs in the face of periodic reversion to a previous state. Their challenge is to describe cognitive states that involve potentiality, and that change through interaction with an incompletely specified context, as occurs in (for example) dialogue or play.