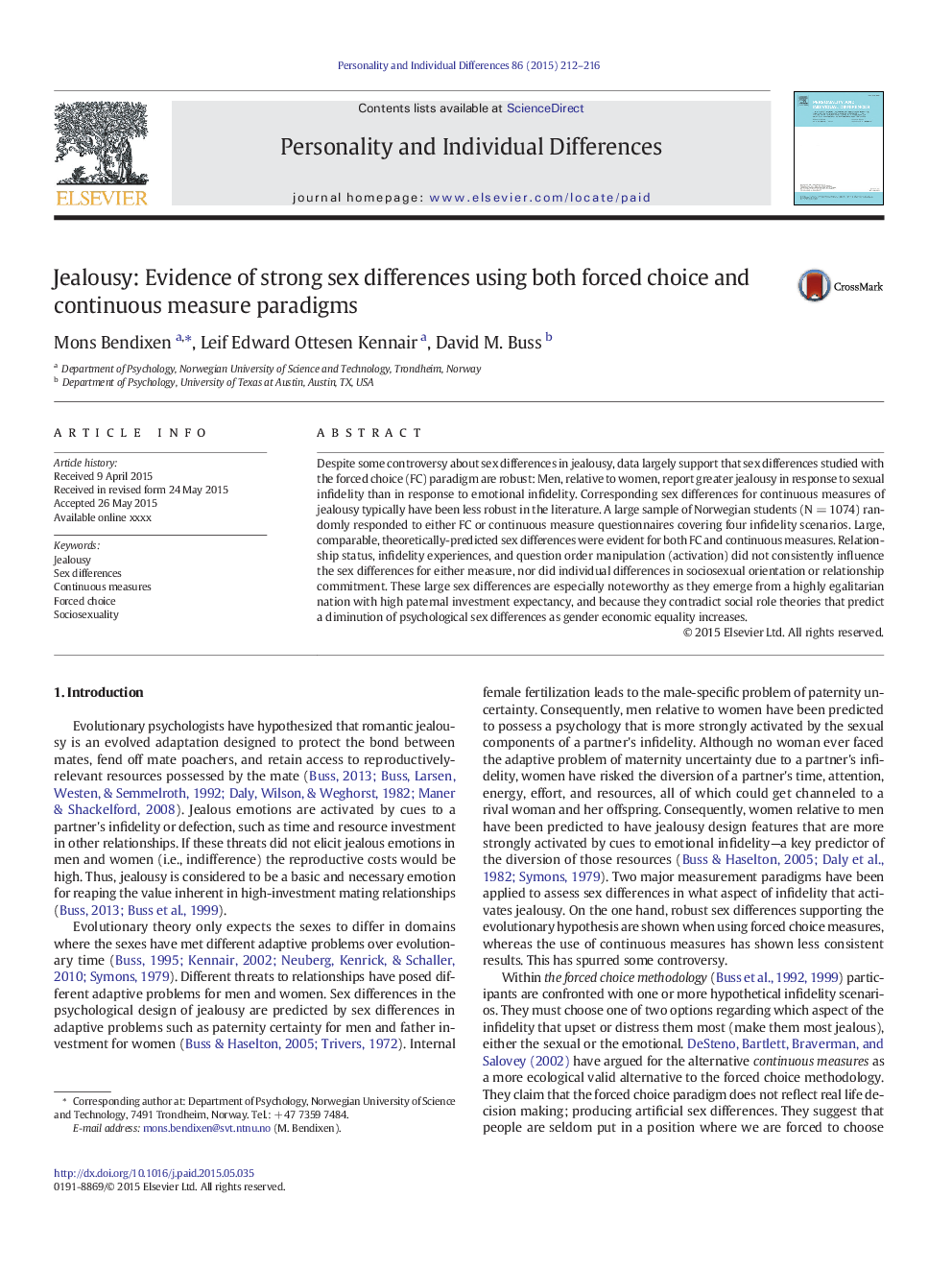 Evolutionary psychologists have hypothesized that romantic jealousy is an evolved adaptation designed to protect the bond between mates, fend off mate poachers, and retain access to reproductively-relevant resources possessed by the mate (Buss, 2013, Buss et al., 1992, Daly et al., 1982 and Maner and Shackelford, 2008). Jealous emotions are activated by cues to a partner's infidelity or defection, such as time and resource investment in other relationships. If these threats did not elicit jealous emotions in men and women (i.e., indifference) the reproductive costs would be high. Thus, jealousy is considered to be a basic and necessary emotion for reaping the value inherent in high-investment mating relationships (Buss, 2013 and Buss et al., 1999). Evolutionary theory only expects the sexes to differ in domains where the sexes have met different adaptive problems over evolutionary time (Buss, 1995, Kennair, 2002, Neuberg et al., 2010 and Symons, 1979). Different threats to relationships have posed different adaptive problems for men and women. Sex differences in the psychological design of jealousy are predicted by sex differences in adaptive problems such as paternity certainty for men and father investment for women (Buss and Haselton, 2005 and Trivers, 1972). Internal female fertilization leads to the male-specific problem of paternity uncertainty. Consequently, men relative to women have been predicted to possess a psychology that is more strongly activated by the sexual components of a partner's infidelity. Although no woman ever faced the adaptive problem of maternity uncertainty due to a partner's infidelity, women have risked the diversion of a partner's time, attention, energy, effort, and resources, all of which could get channeled to a rival woman and her offspring. Consequently, women relative to men have been predicted to have jealousy design features that are more strongly activated by cues to emotional infidelity—a key predictor of the diversion of those resources (Buss and Haselton, 2005, Daly et al., 1982 and Symons, 1979). Two major measurement paradigms have been applied to assess sex differences in what aspect of infidelity that activates jealousy. On the one hand, robust sex differences supporting the evolutionary hypothesis are shown when using forced choice measures, whereas the use of continuous measures has shown less consistent results. This has spurred some controversy. Within the forced choice methodology ( Buss et al., 1999 and Buss et al., 1999) participants are confronted with one or more hypothetical infidelity scenarios. They must choose one of two options regarding which aspect of the infidelity that upset or distress them most (make them most jealous), either the sexual or the emotional. DeSteno, Bartlett, Braverman, and Salovey (2002) have argued for the alternative continuous measures as a more ecological valid alternative to the forced choice methodology. They claim that the forced choice paradigm does not reflect real life decision making; producing artificial sex differences. They suggest that people are seldom put in a position where we are forced to choose between what is most distressing, either sexual infidelity or emotional infidelity.