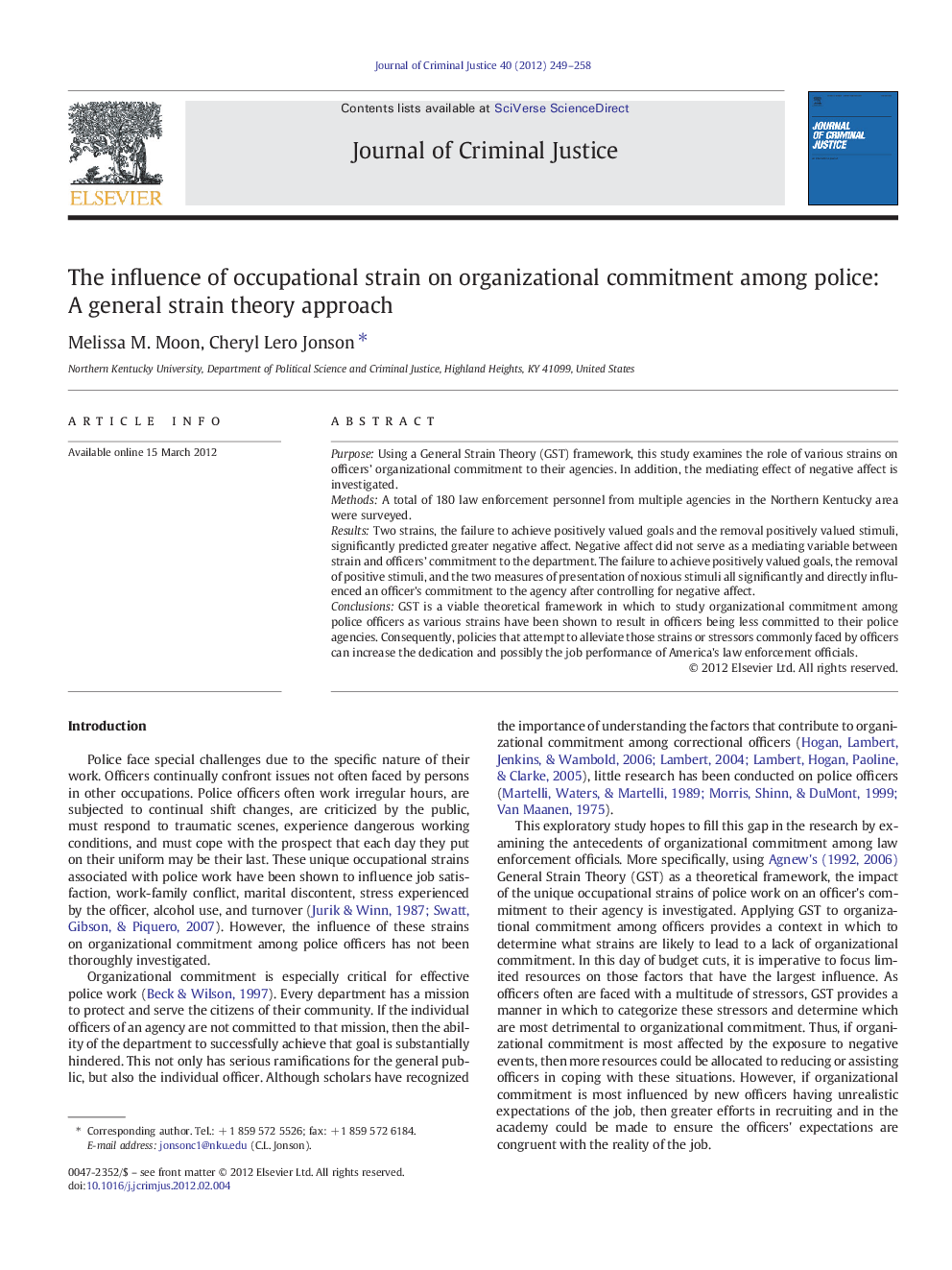 Using a General Strain Theory (GST) framework, this study examines the role of various strains on officers’ organizational commitment to their agencies. In addition, the mediating effect of negative affect is investigated. Methods A total of 180 law enforcement personnel from multiple agencies in the Northern Kentucky area were surveyed. Results Two strains, the failure to achieve positively valued goals and the removal positively valued stimuli, significantly predicted greater negative affect. Negative affect did not serve as a mediating variable between strain and officers’ commitment to the department. The failure to achieve positively valued goals, the removal of positive stimuli, and the two measures of presentation of noxious stimuli all significantly and directly influenced an officer's commitment to the agency after controlling for negative affect. Conclusions GST is a viable theoretical framework in which to study organizational commitment among police officers as various strains have been shown to result in officers being less committed to their police agencies. Consequently, policies that attempt to alleviate those strains or stressors commonly faced by officers can increase the dedication and possibly the job performance of America's law enforcement officials.

Police face special challenges due to the specific nature of their work. Officers continually confront issues not often faced by persons in other occupations. Police officers often work irregular hours, are subjected to continual shift changes, are criticized by the public, must respond to traumatic scenes, experience dangerous working conditions, and must cope with the prospect that each day they put on their uniform may be their last. These unique occupational strains associated with police work have been shown to influence job satisfaction, work-family conflict, marital discontent, stress experienced by the officer, alcohol use, and turnover (Jurik and Winn, 1987 and Swatt et al., 2007). However, the influence of these strains on organizational commitment among police officers has not been thoroughly investigated. Organizational commitment is especially critical for effective police work (Beck & Wilson, 1997). Every department has a mission to protect and serve the citizens of their community. If the individual officers of an agency are not committed to that mission, then the ability of the department to successfully achieve that goal is substantially hindered. This not only has serious ramifications for the general public, but also the individual officer. Although scholars have recognized the importance of understanding the factors that contribute to organizational commitment among correctional officers (Hogan et al., 2006, Lambert, 2004 and Lambert et al., 2005), little research has been conducted on police officers (Martelli et al., 1989, Morris et al., 1999 and Van Maanen, 1975). This exploratory study hopes to fill this gap in the research by examining the antecedents of organizational commitment among law enforcement officials. More specifically, using Agnew, 1992 and Agnew, 2006 General Strain Theory (GST) as a theoretical framework, the impact of the unique occupational strains of police work on an officer's commitment to their agency is investigated. Applying GST to organizational commitment among officers provides a context in which to determine what strains are likely to lead to a lack of organizational commitment. In this day of budget cuts, it is imperative to focus limited resources on those factors that have the largest influence. As officers often are faced with a multitude of stressors, GST provides a manner in which to categorize these stressors and determine which are most detrimental to organizational commitment. Thus, if organizational commitment is most affected by the exposure to negative events, then more resources could be allocated to reducing or assisting officers in coping with these situations. However, if organizational commitment is most influenced by new officers having unrealistic expectations of the job, then greater efforts in recruiting and in the academy could be made to ensure the officers' expectations are congruent with the reality of the job.