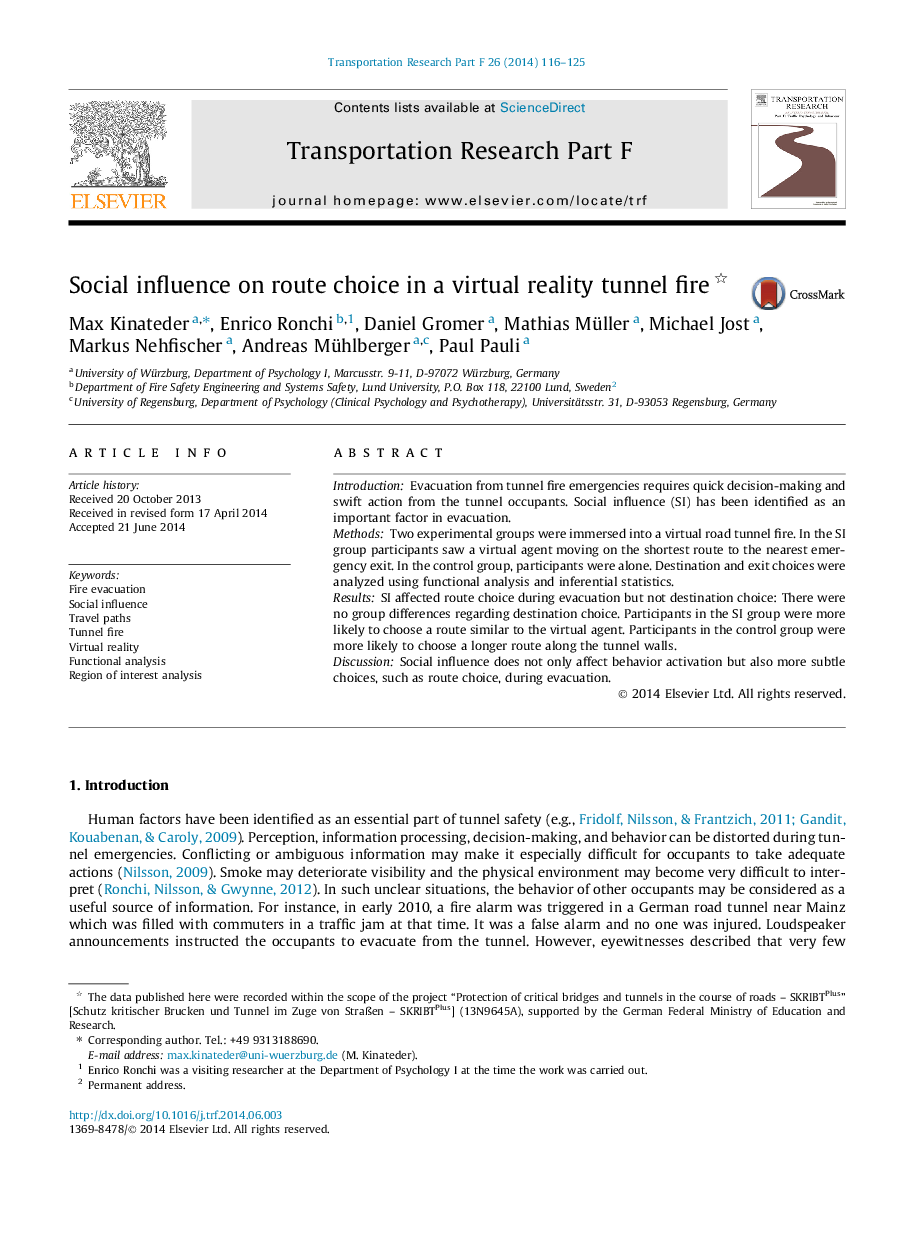 Introduction Evacuation from tunnel fire emergencies requires quick decision-making and swift action from the tunnel occupants. Social influence (SI) has been identified as an important factor in evacuation. Methods Two experimental groups were immersed into a virtual road tunnel fire. In the SI group participants saw a virtual agent moving on the shortest route to the nearest emergency exit. In the control group, participants were alone. Destination and exit choices were analyzed using functional analysis and inferential statistics. Results SI affected route choice during evacuation but not destination choice: There were no group differences regarding destination choice. Participants in the SI group were more likely to choose a route similar to the virtual agent. Participants in the control group were more likely to choose a longer route along the tunnel walls. Discussion Social influence does not only affect behavior activation but also more subtle choices, such as route choice, during evacuation.

Human factors have been identified as an essential part of tunnel safety (e.g., Fridolf et al., 2011 and Gandit et al., 2009). Perception, information processing, decision-making, and behavior can be distorted during tunnel emergencies. Conflicting or ambiguous information may make it especially difficult for occupants to take adequate actions (Nilsson, 2009). Smoke may deteriorate visibility and the physical environment may become very difficult to interpret (Ronchi, Nilsson, & Gwynne, 2012). In such unclear situations, the behavior of other occupants may be considered as a useful source of information. For instance, in early 2010, a fire alarm was triggered in a German road tunnel near Mainz which was filled with commuters in a traffic jam at that time. It was a false alarm and no one was injured. Loudspeaker announcements instructed the occupants to evacuate from the tunnel. However, eyewitnesses described that very few followed the instructions and left the tunnel. A commuter in the tunnel stated that “We [the occupants] looked at each other, but nobody dared to leave the car (Lang, 2010)’’. This statement suggests that the behavior of others had a stronger influence on the occupants’ behavior than the loudspeaker announcements. Studies show that during dangerous situations in road tunnels people strongly influence each other in exit choice (e.g. Nilsson, Johansson, & Frantzich, 2009). According to Darley and Latané (1968), individuals feel less responsible to act in groups compared to when alone. In their classical experimental study, the authors showed that passive behavior of others may thwart immediate evacuation. As this might be the case for all occupants in the situation, this may lead to delayed or inadequate evacuation (Darley & Latané, 1968). This mutual effect of occupants’ behavior on each other is referred to as social influence (SI, Hewstone & Martin, 2008). During emergency situations, occupants have to decide where they want to move to (destination choice3) and how they want to reach their destination (route choice). Both, destination and route choice are two important factors for egress from a tunnel emergency as they affect the time necessary to reach a place of safety and the spatiotemporal distance to the hazard. However, not all occupants pick an adequate destination or the optimal route (Fridolf et al., 2011, Nilsson, 2009 and Nilsson et al., 2009). SI is hypothesized to affect both variables during evacuation from a tunnel emergency. Shields and Boyce (2000) showed in a study on an unannounced fire evacuation from a department store that up to 9.5% of the occupants stated that the behavior of others was a relevant cue for their destination choice. Tunnel evacuation studies in real world settings (Boer and van Zanten, 2007, Frantzich and Nilsson, 2003 and Nilsson et al., 2009) and in virtual reality (VR; Kinateder et al., 2013 and Kinateder et al., 2014) focused on destination choice and evacuation time. These parameters permit evaluating different design solutions, factors affecting human behavior, or emergency management strategies (Nilsson, 2009). However, SI on the spatiotemporal movement of occupants (travel paths) has not been studied sufficiently. Travel paths are particularly important in evacuation research since the occupants’ spatiotemporal position, in relation to a safe location (e.g. an emergency exit) is crucial. It is important not only to study the time spent inside the tunnel, but also the position of the occupants during the passage of time since it affects exposure to dangerous factors like smoke and high temperatures. So far, qualitative evaluations are the most common way to present occupants’ evacuation travel paths. Ronchi et al.4 developed a quantitative method to analyze occupant travel paths based on previous studies about the use of functional analysis operators in evacuation research (Ronchi, Reneke, & Peacock, 2013). Among others, the authors introduced the concept of Interaction Areas (IA, Ronchi et al., 2013 and Ronchi et al., 2014). IAs correspond to the area under the curve representing an occupant’s distance (d) to a certain element over time (for e.g., the distance to an emergency exit or the fire source) for each occupant (j) in a given experimental condition (e). That is, View the MathML sourceIAde,j can be used to quantify participants’ route choice and allows statistical comparisons between experimental groups (e). Detailed explanations on the development and limitations of IAs are available in Ronchi et al. (2013) (see Fig. 1).