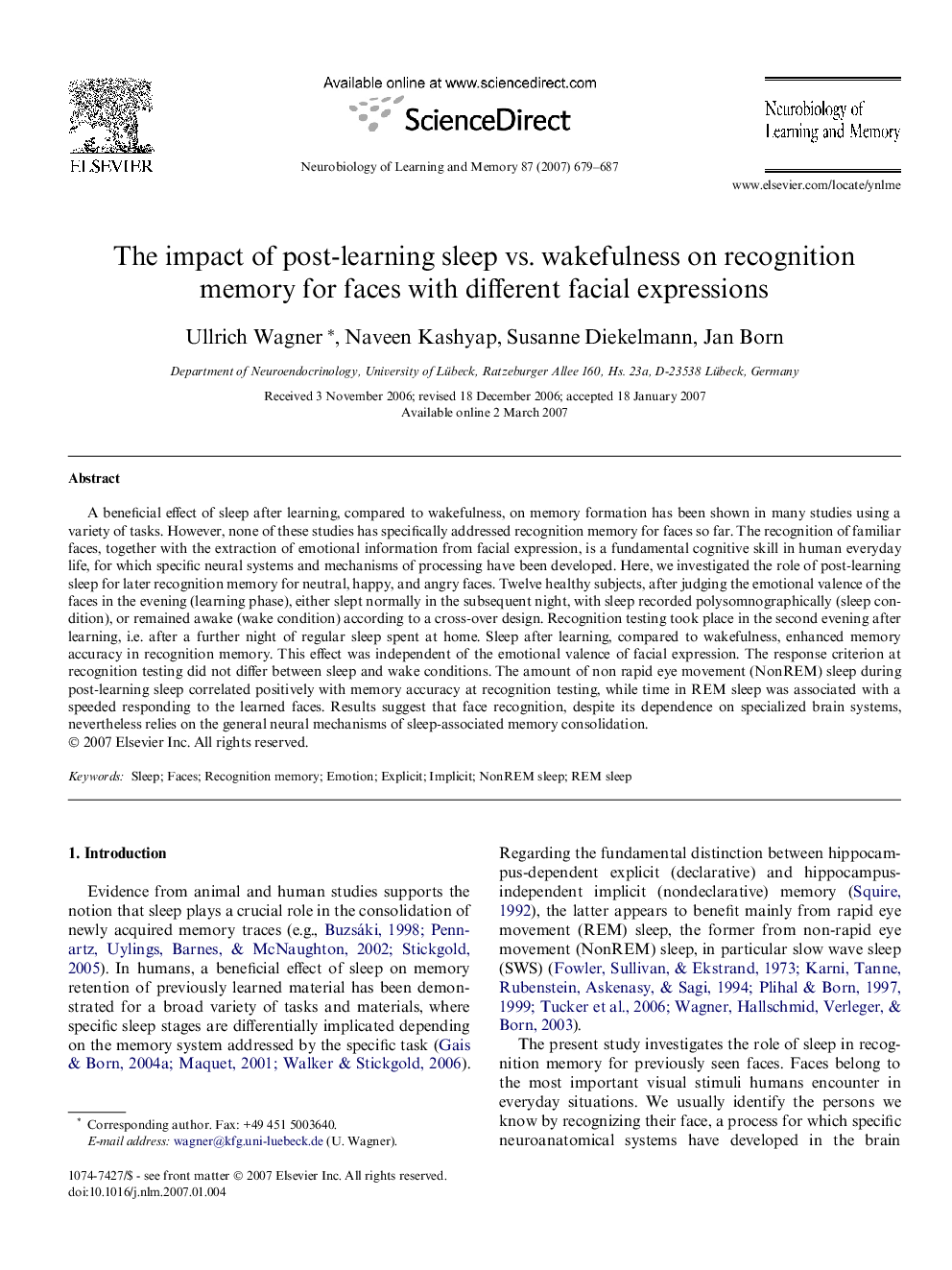 Abstract A beneficial effect of sleep after learning, compared to wakefulness, on memory formation has been shown in many studies using a variety of tasks. However, none of these studies has specifically addressed recognition memory for faces so far. The recognition of familiar faces, together with the extraction of emotional information from facial expression, is a fundamental cognitive skill in human everyday life, for which specific neural systems and mechanisms of processing have been developed. Here, we investigated the role of post-learning sleep for later recognition memory for neutral, happy, and angry faces. Twelve healthy subjects, after judging the emotional valence of the faces in the evening (learning phase), either slept normally in the subsequent night, with sleep recorded polysomnographically (sleep condition), or remained awake (wake condition) according to a cross-over design. Recognition testing took place in the second evening after learning, i.e. after a further night of regular sleep spent at home. Sleep after learning, compared to wakefulness, enhanced memory accuracy in recognition memory. This effect was independent of the emotional valence of facial expression. The response criterion at recognition testing did not differ between sleep and wake conditions. The amount of non rapid eye movement (NonREM) sleep during post-learning sleep correlated positively with memory accuracy at recognition testing, while time in REM sleep was associated with a speeded responding to the learned faces. Results suggest that face recognition, despite its dependence on specialized brain systems, nevertheless relies on the general neural mechanisms of sleep-associated memory consolidation.

. Introduction Evidence from animal and human studies supports the notion that sleep plays a crucial role in the consolidation of newly acquired memory traces (e.g., Buzsáki, 1998, Pennartz et al., 2002 and Stickgold, 2005). In humans, a beneficial effect of sleep on memory retention of previously learned material has been demonstrated for a broad variety of tasks and materials, where specific sleep stages are differentially implicated depending on the memory system addressed by the specific task (Gais and Born, 2004a, Maquet, 2001 and Walker and Stickgold, 2006). Regarding the fundamental distinction between hippocampus-dependent explicit (declarative) and hippocampus-independent implicit (nondeclarative) memory (Squire, 1992), the latter appears to benefit mainly from rapid eye movement (REM) sleep, the former from non-rapid eye movement (NonREM) sleep, in particular slow wave sleep (SWS) (Fowler et al., 1973, Karni et al., 1994, Plihal and Born, 1997, Plihal and Born, 1999, Tucker et al., 2006 and Wagner et al., 2003). The present study investigates the role of sleep in recognition memory for previously seen faces. Faces belong to the most important visual stimuli humans encounter in everyday situations. We usually identify the persons we know by recognizing their face, a process for which specific neuroanatomical systems have developed in the brain (Allison et al., 1994, Farah, 1996, Kanwisher, 2000 and Tsao et al., 2006). However, facial stimuli have seldom been used as learning material in sleep research (Clemens et al., 2005 and Wagner et al., 2003). Thus, although the ability to reliably recognize familiar faces is one of the most fundamental cognitive skills in human life, little is known so far about how memory for faces is influenced by sleep. In a previous study, we have investigated the effect of sleep on implicit face memory in a reaction time priming task and found evidence for a supporting effect specifically of sleep periods containing high amounts of REM sleep (Wagner et al., 2003). Here, we extend these findings by investigating the role of sleep in explicit memory for faces in a standard recognition memory procedure. Explicit recognition of familiar faces is a basic prerequisite for appropriate human social behavior. Importantly, recent findings in other memory tasks indicated that sleep can even be more relevant to explicit than implicit aspects of memory formation ( Fischer et al., 2006, Robertson et al., 2004 and Wagner et al., 2004). The only study on sleep-associated memory consolidation that used facial stimuli to assess explicit memory so far was reported by Clemens and colleagues (2005), who primarily investigated verbal declarative memory (remembering names) but introduced the face memory task as a nonverbal control task. In this study, subjects learned face-name associations in the evening and were tested after a night of sleep in the next morning for verbal (free recall of the names) and nonverbal memory (face recognition task). Recognition memory for the faces was positively associated with total sleep time and the amount of NonREM sleep during the night (while overnight memory retention of the names correlated with the number of sleep spindles). Here, we compare directly the effects of sleep and wakefulness following learning on subsequent recognition of faces newly encountered at learning. To avoid confounds with circadian factors, learning and memory testing always took place at the same time of day in both conditions. A second aim of the study was to investigate the possible modulating role of emotional valence on sleep-associated face recognition. Apart from the identification of familiar persons, conveying emotional information via facial expression is the second major function of faces (see Calder & Young, 2005, for a recent discussion of both functions). To vary emotional valence of the learning material, we therefore included faces with neutral, positive (happy), and negative (angry) facial expression. Emotionally valenced material is typically better remembered than neutral material (a phenomenon called “emotional enhancement” in memory) and previous studies indicated that the effect of sleep on memory consolidation can differ depending on the emotional valence of the learning material, with memory consolidation for highly emotional material particularly benefiting from sleep periods containing high amounts of REM sleep (Cahill and McGaugh, 1998, Christianson, 1992, Hamann, 2001, Wagner et al., 2001 and Wagner et al., 2005). However, because these observations mainly refer to verbal free recall tasks, they do not necessarily hold for face recognition memory. Although emotional enhancement has also been reported for recognition memory tasks (Bradley et al., 1992 and Ochsner, 2000), several studies on recognition memory failed to confirm this and rather found evidence for an emotion-induced shift towards a more liberal response bias, i.e., a general tendency to classify emotional stimuli as familiar regardless of whether they were actually presented previously or not (Joyce and Kutas, 2005 and Windmann and Kutas, 2001). This has also been demonstrated specifically for face stimuli (Johansson, Mecklinger, & Treese, 2004). Apart from memory performance per se, this response bias may be also influenced by sleep. We therefore tested effects of post-learning sleep not only on memory accuracy, but also on response bias in recognition memory (see Snodgrass & Corwin, 1988).