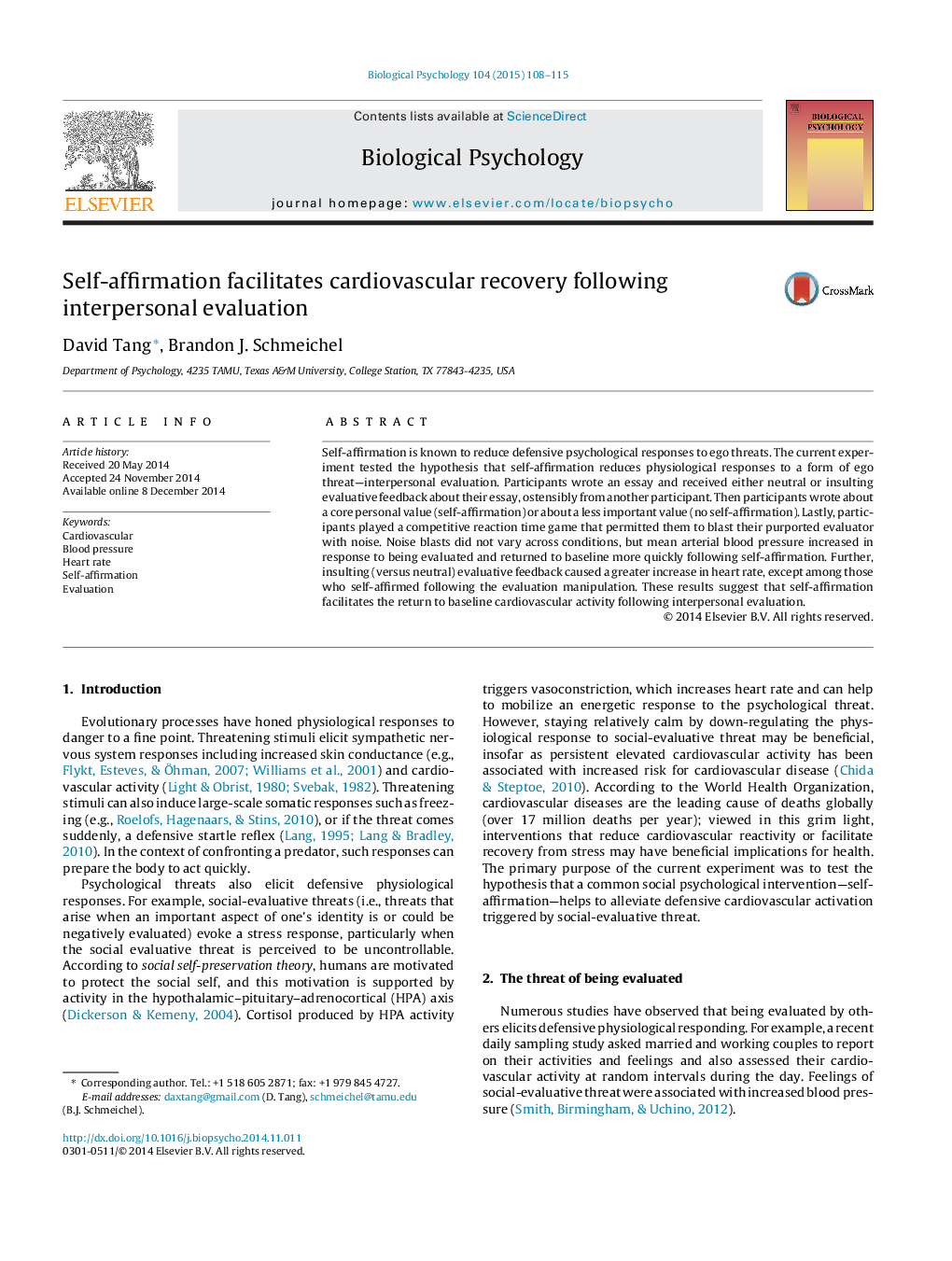 Abstract Self-affirmation is known to reduce defensive psychological responses to ego threats. The current experiment tested the hypothesis that self-affirmation reduces physiological responses to a form of ego threat—interpersonal evaluation. Participants wrote an essay and received either neutral or insulting evaluative feedback about their essay, ostensibly from another participant. Then participants wrote about a core personal value (self-affirmation) or about a less important value (no self-affirmation). Lastly, participants played a competitive reaction time game that permitted them to blast their purported evaluator with noise. Noise blasts did not vary across conditions, but mean arterial blood pressure increased in response to being evaluated and returned to baseline more quickly following self-affirmation. Further, insulting (versus neutral) evaluative feedback caused a greater increase in heart rate, except among those who self-affirmed following the evaluation manipulation. These results suggest that self-affirmation facilitates the return to baseline cardiovascular activity following interpersonal evaluation.

. Introduction Evolutionary processes have honed physiological responses to danger to a fine point. Threatening stimuli elicit sympathetic nervous system responses including increased skin conductance (e.g., Flykt et al., 2007 and Williams et al., 2001) and cardiovascular activity (Light and Obrist, 1980 and Svebak, 1982). Threatening stimuli can also induce large-scale somatic responses such as freezing (e.g., Roelofs, Hagenaars, & Stins, 2010), or if the threat comes suddenly, a defensive startle reflex (Lang, 1995 and Lang and Bradley, 2010). In the context of confronting a predator, such responses can prepare the body to act quickly. Psychological threats also elicit defensive physiological responses. For example, social-evaluative threats (i.e., threats that arise when an important aspect of one's identity is or could be negatively evaluated) evoke a stress response, particularly when the social evaluative threat is perceived to be uncontrollable. According to social self-preservation theory, humans are motivated to protect the social self, and this motivation is supported by activity in the hypothalamic–pituitary–adrenocortical (HPA) axis ( Dickerson & Kemeny, 2004). Cortisol produced by HPA activity triggers vasoconstriction, which increases heart rate and can help to mobilize an energetic response to the psychological threat. However, staying relatively calm by down-regulating the physiological response to social-evaluative threat may be beneficial, insofar as persistent elevated cardiovascular activity has been associated with increased risk for cardiovascular disease ( Chida & Steptoe, 2010). According to the World Health Organization, cardiovascular diseases are the leading cause of deaths globally (over 17 million deaths per year); viewed in this grim light, interventions that reduce cardiovascular reactivity or facilitate recovery from stress may have beneficial implications for health. The primary purpose of the current experiment was to test the hypothesis that a common social psychological intervention—self-affirmation—helps to alleviate defensive cardiovascular activation triggered by social-evaluative threat.

8. Conclusions The current study found that affirming values important to the self reduces cardiovascular stress responses. MAP increased regardless of what type of evaluative feedback participants received and was reduced by affirming a core value. Insulting evaluative feedback caused an increase in HR, except among individuals who affirmed an important value after being insulted. These patterns, viewed in conjunction with previous research, suggest that affirming important values may reduce both physiological and psychological responses to threat.