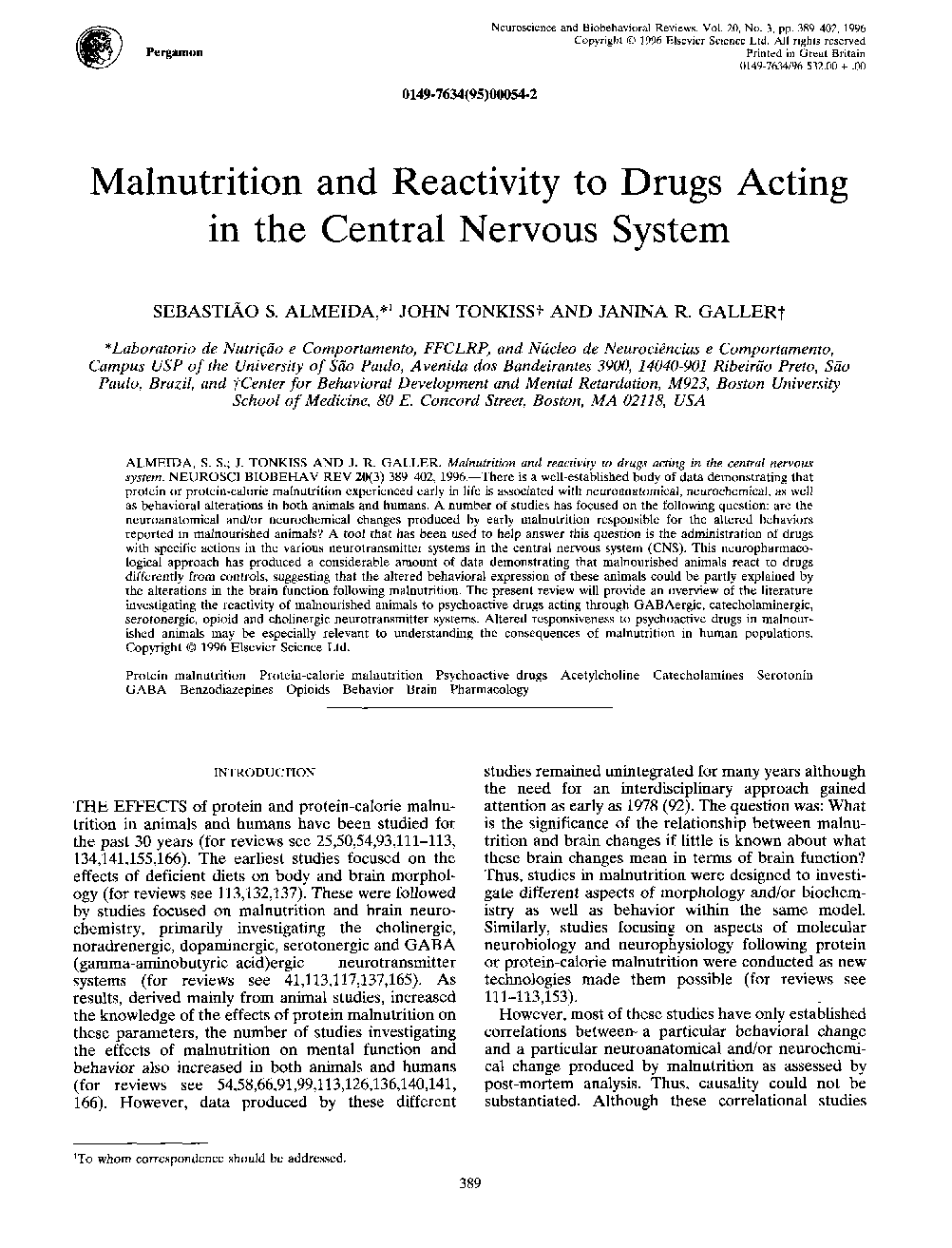 Abstract ALMEIDA, S. S.; J. TONKISS AND J. R. GALLER. Malnutrition and reactivity to drugs acting in the central nervous system. NEUROSCI BIOBEHAV REV 20(3) 389–402, 1996.—There is a well-established body of data demonstrating that protein or protein-calorie malnutrition experienced early in life is associated with neuroanatomical, neurochemical, as well as behavioral alterations in both animals and humans. A number of studies has focused on the following question: are the neuroanatomical and/or neurochemical changes produced by early malnutrition responsible for the altered behaviors reported in malnourished animals? A tool that has been used to help answer this question is the administration of drugs with specific actions in the various neurotransmitter systems in the central nervous system (CNS). This neuropharmacological approach has produced a considerable amount of data demonstrating that malnourished animals react to drugs differently from controls, suggesting that the altered behavioral expression of these animals could be partly explained by the alterations in the brain function following malnutrition. The present review will provide an overview of the literature investigating the reactivity of malnourished animals to psychoactive drugs acting through GABAergic, catecholaminergic, serotonergic, opioid and cholinergic neurotransmitter systems. Altered responsiveness to psychoactive drugs in malnourished animals may be especially relevant to understanding the consequences of malnutrition in human populations. Copyright © 1996 Elsevier Science Ltd.

1. INTRODUCTION THE EFFECTS of protein and protein-calorie malnutrition in animals and humans have been studied for the past 30 years (for reviews see 25, 50, 54, 93, 111, 112, 113, 134, 141, 155 and 166). The earliest studies focused on the effects of deficient diets on body and brain morphology (for reviews see 113, 132 and 137). These were followed by studies focused on malnutrition and brain neurochemistry, primarily investigating the cholinergic, noradrenergic, dopaminergic, serotonergic and GABA (gamma-aminobutyric acid)ergic neurotransmitter systems (for reviews see 41, 113, 117, 137 and 165). As results, derived mainly from animal studies, increased the knowledge of the effects of protein malnutrition on these parameters, the number of studies investigating the effects of malnutrition on mental function and behavior also increased in both animals and humans (for reviews see 54, 58, 66, 91, 99, 113, 126, 136, 140, 141 and 166). However, data produced by these different studies remained unintegrated for many years although the need for an interdisciplinary approach gained attention as early as 1978 [92]. The question was: What is the significance of the relationship between malnutrition and brain changes if little is known about what these brain changes mean in terms of brain function? Thus, studies in malnutrition were designed to investigate different aspects of morphology and/or biochemistry as well as behavior within the same model. Similarly, studies focusing on aspects of molecular neurobiology and neurophysiology following protein or protein-calorie malnutrition were conducted as new technologies made them possible (for reviews see 111, 112, 113 and 153). However, most of these studies have only established correlations between a particular behavioral change and a particular neuroanatomical and/or neurochemical change produced by malnutrition as assessed by post-mortem analysis. Thus, causality could not be substantiated. Although these correlational studies produced a substantial mount of data, the functional significance of any neuroanatomical and/or neurochemical alterations produced by malnutrition needed a more direct approach. Some advances have come with interdisciplinary neuropharmacological studies which use centrally acting drugs to investigate the question of which particular neuroanatomical and/or neurochemical brain alteration could be underlying changes in behavioral expression. Specifically, we know the mechanisms of action of several drugs acting in the central nervous system (CNS) that alter a large class of behaviors. Because the specificity of these drugs to a particular neurotransmitter system or even to a particular receptor subtype in that system is known, these drugs can be used as a tool to investigate whether malnutrition induced an alteration in a particular neurotransmitter system. Evidence for this would be indicated by a differential behavioral change in response to the drug. This neuropharmacological approach has the advantage of assessing the consequences of altered neuroanatomical and/or neurochemical parameters in rats with a history of malnutrition while the animals are behaving in a particular test chosen to measure specific aspects of behavior. In this paper, we review studies on the effects of psychoactive drugs acting through the GABAergic, catecholaminergic, serotonergic, opioid and cholinergic neurotransmitter systems in protein- and protein-malnourished animals.