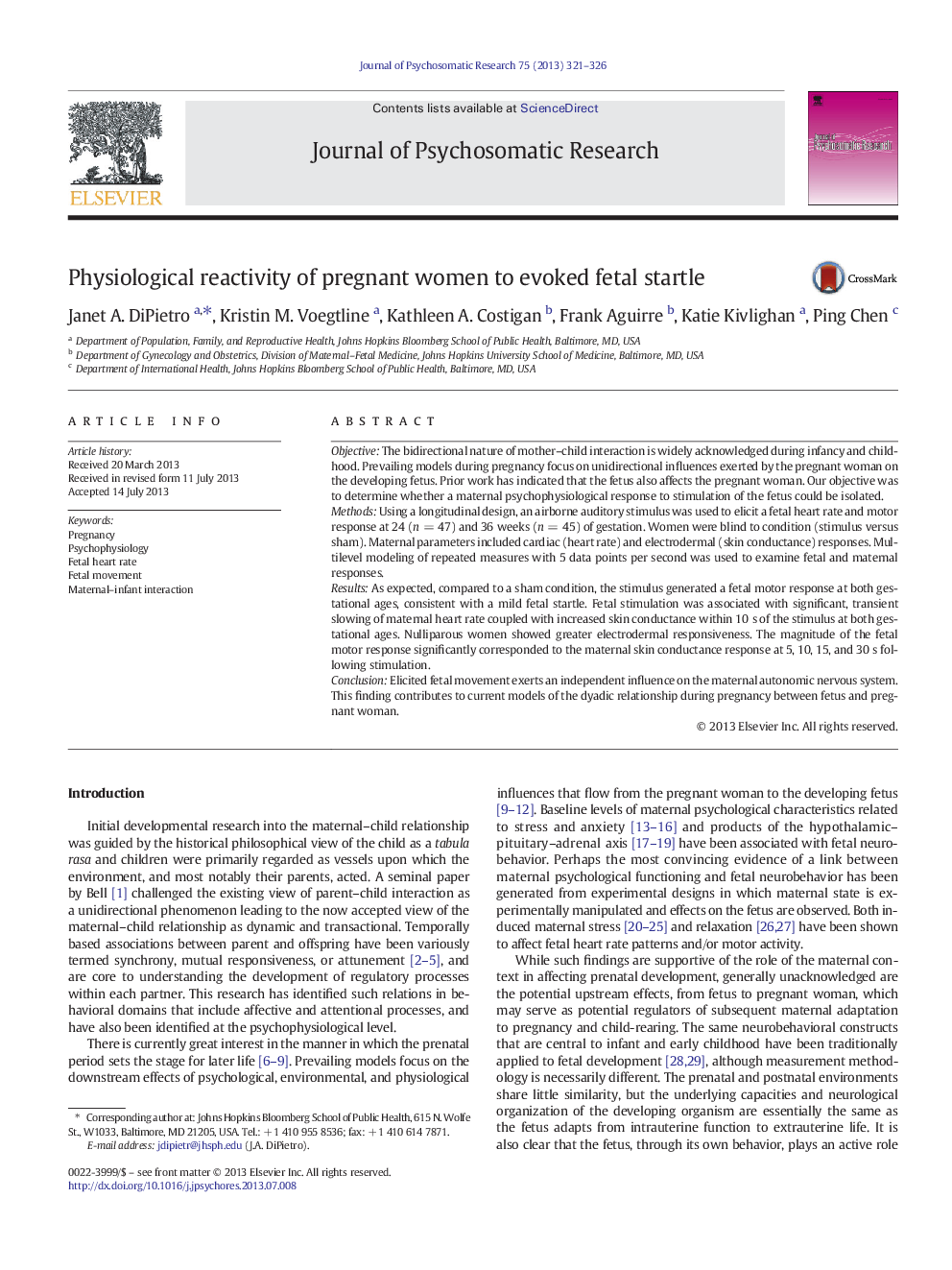 Abstract Objective The bidirectional nature of mother–child interaction is widely acknowledged during infancy and childhood. Prevailing models during pregnancy focus on unidirectional influences exerted by the pregnant woman on the developing fetus. Prior work has indicated that the fetus also affects the pregnant woman. Our objective was to determine whether a maternal psychophysiological response to stimulation of the fetus could be isolated. Methods Using a longitudinal design, an airborne auditory stimulus was used to elicit a fetal heart rate and motor response at 24 (n = 47) and 36 weeks (n = 45) of gestation. Women were blind to condition (stimulus versus sham). Maternal parameters included cardiac (heart rate) and electrodermal (skin conductance) responses. Multilevel modeling of repeated measures with 5 data points per second was used to examine fetal and maternal responses. Results As expected, compared to a sham condition, the stimulus generated a fetal motor response at both gestational ages, consistent with a mild fetal startle. Fetal stimulation was associated with significant, transient slowing of maternal heart rate coupled with increased skin conductance within 10 s of the stimulus at both gestational ages. Nulliparous women showed greater electrodermal responsiveness. The magnitude of the fetal motor response significantly corresponded to the maternal skin conductance response at 5, 10, 15, and 30 s following stimulation. Conclusion Elicited fetal movement exerts an independent influence on the maternal autonomic nervous system. This finding contributes to current models of the dyadic relationship during pregnancy between fetus and pregnant woman.

Introduction Initial developmental research into the maternal–child relationship was guided by the historical philosophical view of the child as a tabula rasa and children were primarily regarded as vessels upon which the environment, and most notably their parents, acted. A seminal paper by Bell [1] challenged the existing view of parent–child interaction as a unidirectional phenomenon leading to the now accepted view of the maternal–child relationship as dynamic and transactional. Temporally based associations between parent and offspring have been variously termed synchrony, mutual responsiveness, or attunement [2], [3], [4] and [5], and are core to understanding the development of regulatory processes within each partner. This research has identified such relations in behavioral domains that include affective and attentional processes, and have also been identified at the psychophysiological level. There is currently great interest in the manner in which the prenatal period sets the stage for later life [6], [7], [8] and [9]. Prevailing models focus on the downstream effects of psychological, environmental, and physiological influences that flow from the pregnant woman to the developing fetus [9], [10], [11] and [12]. Baseline levels of maternal psychological characteristics related to stress and anxiety [13], [14], [15] and [16] and products of the hypothalamic–pituitary–adrenal axis [17], [18] and [19] have been associated with fetal neurobehavior. Perhaps the most convincing evidence of a link between maternal psychological functioning and fetal neurobehavior has been generated from experimental designs in which maternal state is experimentally manipulated and effects on the fetus are observed. Both induced maternal stress [20], [21], [22], [23], [24] and [25] and relaxation [26] and [27] have been shown to affect fetal heart rate patterns and/or motor activity. While such findings are supportive of the role of the maternal context in affecting prenatal development, generally unacknowledged are the potential upstream effects, from fetus to pregnant woman, which may serve as potential regulators of subsequent maternal adaptation to pregnancy and child-rearing. The same neurobehavioral constructs that are central to infant and early childhood have been traditionally applied to fetal development [28] and [29], although measurement methodology is necessarily different. The prenatal and postnatal environments share little similarity, but the underlying capacities and neurological organization of the developing organism are essentially the same as the fetus adapts from intrauterine function to extrauterine life. It is also clear that the fetus, through its own behavior, plays an active role in epigenesis and ontogeny [30] and [31] as it interfaces with the characteristics of the intrauterine environment. Previously, in a sample of 137 maternal–fetal pairs assessed longitudinally during the second half of pregnancy, we demonstrated that spontaneous fetal motor activity transiently stimulates maternal sympathetic arousal [32] even though women perceive only a small proportion of fetal movements [33]. This association, which showed little change between the 20th and 38th weeks of gestation, was replicated in an additional sample of women (n = 195) from different sociodemographic and ethnic backgrounds [34]. These findings were based on second by second time series analyses of contemporaneous maternal–fetal recordings during undisturbed, baseline periods that were 50 min long. In both reports, spontaneous fetal movements were observed to generate an increase in maternal heart rate and electrodermal activity within 2–3 s at each of the six gestational periods studied. Initially, these analyses were not focused on detecting an effect from fetus to mother. Rather, dual data streams were empirically analyzed ± 100 s of origin without respect to the originating axis thereby allowing effects to emerge in either direction. From this process, we identified change in the fetus (i.e., in motor activity) to be the impetus for change in the pregnant woman. However, measurement under baseline conditions does not control for potential joint stimulation of both members of the dyad by uncontrolled sources. Here we use an experimental model in an effort to isolate a maternal response to an elicited fetal movement. Fetuses can detect and respond to sounds external to the uterine environment [35] and [36], thereby affording us the chance to stimulate the fetus independently of the woman and record any maternal response. The fetal response to the brief application of vibroacoustic or auditory stimulation has been well documented in academic literature as early as the 1930's [37]. Examples of vibroacoustic stimuli applied directly to the maternal abdomen have included those designed for obstetric purposes to stimulate a dormant fetus [38], [39], [40] and [41], an electronic artificial larynx [42] and [43], and other devices that emit vibrations [44] and [45]. In general, fetuses respond to initial applications of vibroacoustic stimuli with transient increases in fetal motor activity and heart rate, consistent with a startle response. The magnitude of the fetal response tends to be commensurate with the intensity of the stimulus. Thus, airborne auditory signals delivered above and not touching the maternal abdomen tend to elicit a less intense response, but are necessary to a design in which pregnant women must be blind to stimulus presentation. Airborne stimuli shown to elicit a fetal response include electronically generated signals of varying intensity and frequency [46], [47], [48] and [49], speech sounds [50], [51] and [52], and music [37] and [53]. We hypothesized that, as observed with spontaneous movements, elicited fetal movements would generate a transient maternal autonomic response as measured by heart rate, which includes both parasympathetic and sympathetic influences, and electrodermal activity, which is singly innervated by sympathetic processes [54]. Fetal sex and maternal parity were evaluated as potential moderators of either the fetal or maternal response based on the existing data indicating differential responsiveness of male fetuses to stimulation [40] and higher background electrodermal activity in nulliparous as compared to multiparous women [55].