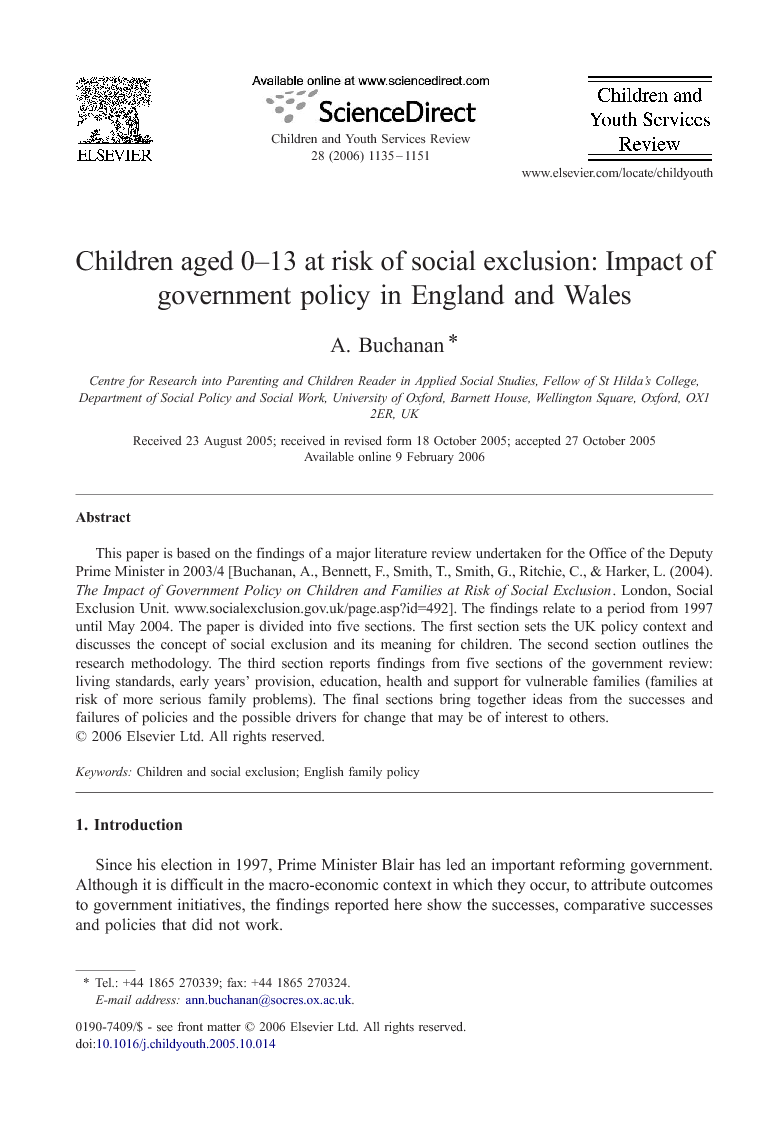 This paper is based on the findings of a major literature review undertaken for the Office of the Deputy Prime Minister in 2003/4 [Buchanan, A., Bennett, F., Smith, T., Smith, G., Ritchie, C., & Harker, L. (2004). The Impact of Government Policy on Children and Families at Risk of Social Exclusion. London, Social Exclusion Unit. www.socialexclusion.gov.uk/page.asp?id=492]. The findings relate to a period from 1997 until May 2004. The paper is divided into five sections. The first section sets the UK policy context and discusses the concept of social exclusion and its meaning for children. The second section outlines the research methodology. The third section reports findings from five sections of the government review: living standards, early years' provision, education, health and support for vulnerable families (families at risk of more serious family problems). The final sections bring together ideas from the successes and failures of policies and the possible drivers for change that may be of interest to others.

Since his election in 1997, Prime Minister Blair has led an important reforming government. Although it is difficult in the macro-economic context in which they occur, to attribute outcomes to government initiatives, the findings reported here show the successes, comparative successes and policies that did not work. In making comparisons between the United Kingdom and elsewhere, a useful starting point is the Human Development indices. The human development index (HDI) focuses on three measurable dimensions of human development: living a long and healthy life, being educated and having a decent standard of living (UNDP, 2004). All issues of relevance to families with young children. The United Kingdom ranks surprisingly poorly when compared against countries at similar levels of development. When considering those with income below the poverty line (defined as households of 50% of median household income), in 1990–2000 the UK was rated 22nd out of 28 countries at similar levels of development. Most of those living in poverty were children and families. Under the ‘Gini’ index in 2004 which measures the extent to which the distribution of income (or consumption) among individuals or households within a country deviates from a perfectly equal distribution,1 the United Kingdom scored 36.0. The poorest 10% only accounted for 2.1% of income and consumption while the richest 44%. 1.1. What is social exclusion? Much has been written about the concept of ‘social exclusion’. Although it is often equated with living in poverty, the term has a much wider focus. In the USA, Sheila Kamerman defines ‘social exclusion’ as a multi dimensional concept which involves economic, political, cultural and other special aspects of disadvantage and deprivation, all of which have a role in excluding individuals and groups from participation in society. She notes that although some scholars use the term interchangeably with poverty, ‘social exclusion’ is increasingly focused on the lack of access to civil, political and social rights and opportunities (Kamerman, 2005). The remit of the Social Exclusion Unit, which was set up after the election of New Labour in 1997 and based in the Cabinet Office, was to investigate cross-cutting issues that led to social exclusion and recommend action. The Unit defined ‘social exclusion’ as: Social exclusion is about more than income poverty. Social exclusion happens when people or places suffer from a series of problems such as unemployment, discrimination, poor skills, low incomes, poor housing, high crime, ill health and family breakdown. When such problems combine they can create a vicious cycle. Social exclusion can happen as a result of problems that face one person in their life. But it can also start from birth. Being born into poverty or to parents with low skills still has a major influence on future life chances. (Social Exclusion Unit, 1999a) Although, there has been considerable debate about the SEU definition of social exclusion (Hills, Le Grand, & Piachaud, 2002), the SEU definition recognizes that social exclusion has an intergenerational dimension and to break the cycle of social exclusion there needs to be a focus on prevention and the early years.