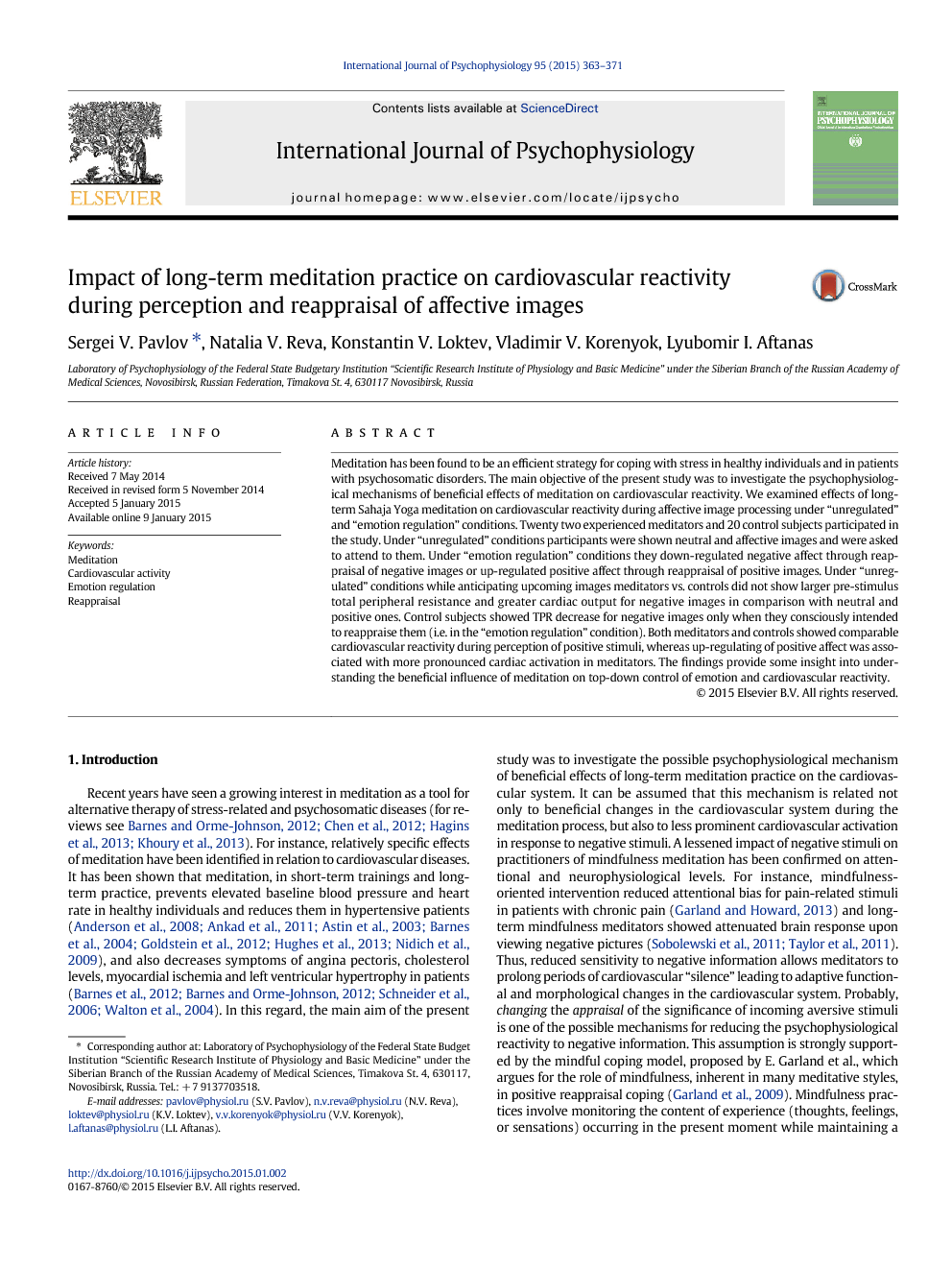 Meditation has been found to be an efficient strategy for coping with stress in healthy individuals and in patients with psychosomatic disorders. The main objective of the present study was to investigate the psychophysiological mechanisms of beneficial effects of meditation on cardiovascular reactivity. We examined effects of long-term Sahaja Yoga meditation on cardiovascular reactivity during affective image processing under “unregulated” and “emotion regulation” conditions. Twenty two experienced meditators and 20 control subjects participated in the study. Under “unregulated” conditions participants were shown neutral and affective images and were asked to attend to them. Under “emotion regulation” conditions they down-regulated negative affect through reappraisal of negative images or up-regulated positive affect through reappraisal of positive images. Under “unregulated” conditions while anticipating upcoming images meditators vs. controls did not show larger pre-stimulus total peripheral resistance and greater cardiac output for negative images in comparison with neutral and positive ones. Control subjects showed TPR decrease for negative images only when they consciously intended to reappraise them (i.e. in the “emotion regulation” condition). Both meditators and controls showed comparable cardiovascular reactivity during perception of positive stimuli, whereas up-regulating of positive affect was associated with more pronounced cardiac activation in meditators. The findings provide some insight into understanding the beneficial influence of meditation on top-down control of emotion and cardiovascular reactivity.

In general, the results of the study showed a distinct influence of long-term meditation practice on cardiovascular activity during anticipation and early response to affective stimuli. An adaptive cardiovascular profile, shown by meditators during the anticipation of negative stimuli is probably implemented by means of automatic transition from primary negative appraisals into the transient, metacognitive state of “mindfulness”, which allows meditators to perceive aversive stimuli without personal involvement in their emotional context. As a result, the significance of the expected adverse events is reduced, which contributes to the reduction of anticipatory anxiety and concomitant vasoconstriction. Apparently, mental shifting from the contents of consciousness to the process of consciousness itself becomes the sustained cognitive style of meditators during anticipation of threat. In turn, preventing excessive and repeated vasoconstriction as a reaction to the threat may prevent damage to the endothelium, the formation of atherosclerotic changes in the arteries, and altered vascular reactivity, thus reducing the risk of cardiovascular diseases such as hypertension and coronary artery disease (Lovallo and Gerin, 2003). Probably, such a type of cardiovascular coping with expected stressors becomes intrinsic for meditators, which may explain adaptive functional and morphological changes in the cardiovascular system, associated with meditation practice. Additionally meditators showed more successful up-regulation of positive emotion, manifested in cardiac activation. It allows us to assume that long-term meditation practice may contribute to more efficient regulation of appetitive motivations, resulting in a positive mood and a feeling of benevolence toward oneself and others.