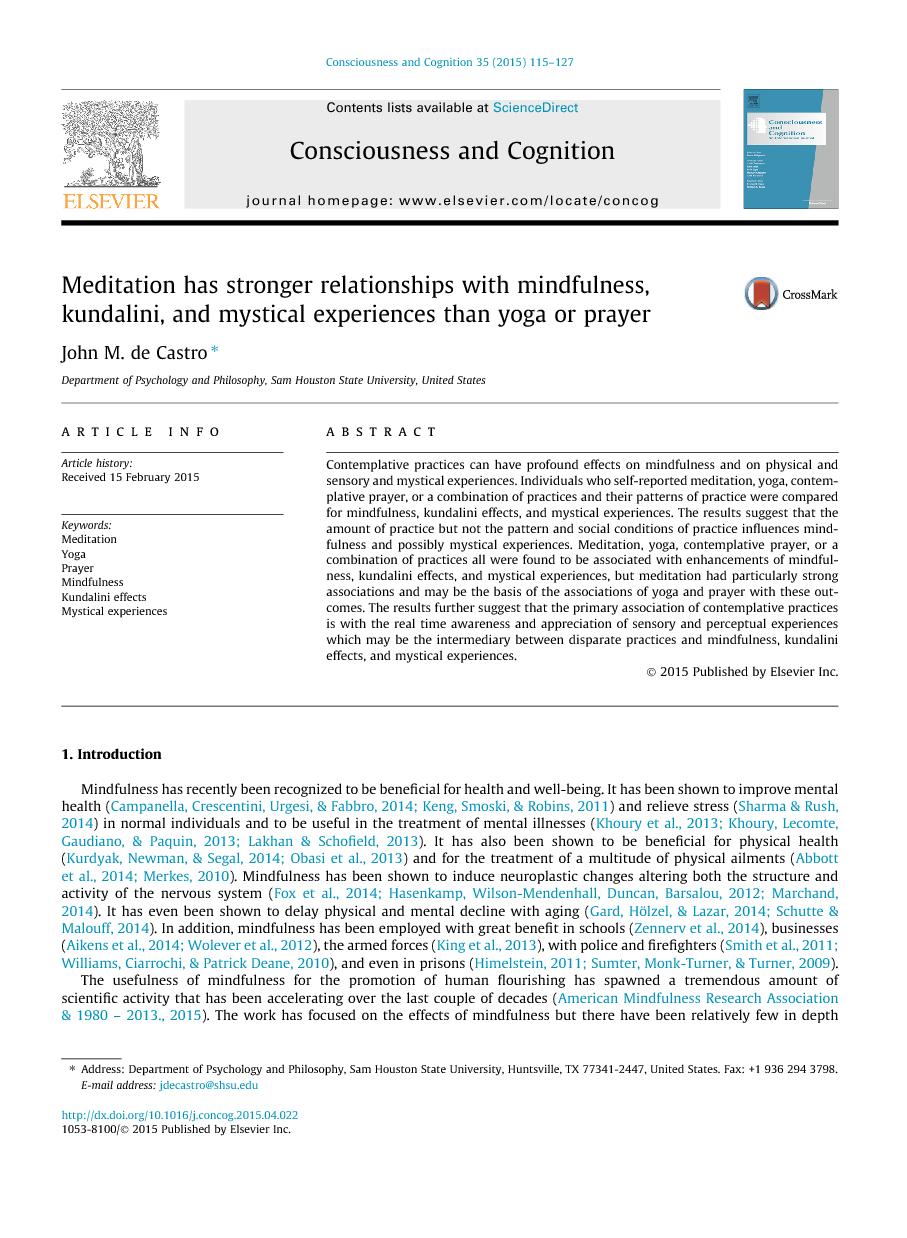 Mindfulness has recently been recognized to be beneficial for health and well-being. It has been shown to improve mental health (Campanella et al., 2014 and Keng et al., 2011) and relieve stress (Sharma & Rush, 2014) in normal individuals and to be useful in the treatment of mental illnesses (Khoury, Lecomte, Fortin, et al., 2013, Khoury, Lecomte, Gaudiano, et al., 2013 and Lakhan and Schofield, 2013). It has also been shown to be beneficial for physical health (Kurdyak et al., 2014 and Obasi et al., 2013) and for the treatment of a multitude of physical ailments (Abbott et al., 2014 and Merkes, 2010). Mindfulness has been shown to induce neuroplastic changes altering both the structure and activity of the nervous system (Fox et al., 2014, Hasenkamp et al., 2012 and Marchand, 2014). It has even been shown to delay physical and mental decline with aging (Gard, Hölzel, et al., 2014 and Schutte and Malouff, 2014). In addition, mindfulness has been employed with great benefit in schools (Zennerv et al., 2014), businesses (Aikens et al., 2014 and Wolever et al., 2012), the armed forces (King et al., 2013), with police and firefighters (Smith et al., 2011 and Williams et al., 2010), and even in prisons (Himelstein, 2011 and Sumter et al., 2009). The usefulness of mindfulness for the promotion of human flourishing has spawned a tremendous amount of scientific activity that has been accelerating over the last couple of decades (American Mindfulness Research Association & 1980 – 2013., 2015). The work has focused on the effects of mindfulness but there have been relatively few in depth investigations into the nature of the contemplative practices and methods that maximally facilitate mindfulness and its benefits. Contemplative practices as used here include a wide variety of practices that have the common thread of emphasizing first person real time awareness. These include meditation, yoga, contemplative prayer, mindful movements, etc. A variety of contemplative practices have been found to increase mindfulness, including meditation (Eberth and Sedlmeier, 2012, Gard, Taquet, et al., 2014, Jacobs et al., 2011 and Soler et al., 2014), yoga (Gard, Taquet, et al., 2014 and Eastman-Mueller et al., 2013), and mixed practices such as Mindfulness Based Stress Reduction (MBSR) (Carmody and Baer, 2008, Dobkin and Zhao, 2011 and Sauer-Zavala et al., 2013). The relationship of the amount and pattern of these practices that is optimal for increasing mindfulness is unclear. Carmody and Baer (2008) found that mindfulness increases with increasing amounts of practice while Dobkin and Zhao (2011) found that it was unrelated to amounts of formal practice. Soler et al. (2014) investigated the characteristics of meditative practice that were associated with heightened mindfulness. They found that frequency and life-time practice, but not session length or meditation type predicted higher levels of mindfulness. Clearly, there is a need to investigate the optimal patterns of practice to maximally increase mindfulness. Contemplative practices can have other effects on the individual including the induction of physical symptoms and changes, often termed kundalini effects (Sanches & Daniels, 2008). These appear to be a consequence of contemplative practice involving changes in the energetics of the individual and the production of physical and sensory alterations (Thalbourne & Fox, 1999). These physical changes can be misinterpreted and diagnosed as anxiety or panic disorder (Thalbourne & Fox, 1999). Kundalini effects were first described in the yogic traditions going as far back as the Upanishads, commentaries on the Hindu scriptures, the Vedas (Krishna, 1993) but have also been recognized in the meditation (Wilber, 1996) and prayer communities (Underhill, 1995). Sanches and Daniels (2008) developed a Kundalini Awakening Scale in order to begin systematic investigations of the kundalini effects. They demonstrated heightened kundalini effects in yoga practitioners and a mixed group of contemplative practices. Unfortunately, with the exception of Sanches and Daniels, 2008 and Thalbourne and Fox, 1999 there has been relatively little systematic research into kundalini effect. Clearly there is a need for empirical research into the kinds of practices and the pattern of practice that have the greatest impact on these effects. Contemplative practices also can induce mystical, spiritual experiences that can have powerful effects on the individual (Büssing et al., 2012, Hood, 2006, Prakash and Caponigro, 2009 and Travis, 2014). These types of effects are reported in many different traditions employing a variety of practices including a variety of yoga, meditation, and prayer techniques (James, 1916 and Stace, 1960). In comparison to kundalini effects there’s been a considerable amount of empirical research on these mystical experiences. Hood (1975) developed a Mysticism Scale to measure the characteristics of these experiences. Applying factor analytic techniques he detected two major factors, a general mystical experiences factor and an interpretative factor. Further analysis employing larger and more diverse samples produced a three-factor structure of Introvertive Mysticism, Extrovertive Mysticism, and Interpretation. Subsequent research generally replicated the basic three-factor structure (Chen et al., 2011, Chen et al., 2012 and Hood, 2006). In the extrovertive mystical experiences all perceptual phenomena are viewed as coming through the senses as one while the introvertive type is devoid of all sensory imagery viewing instead everything as pure consciousness. “The essential difference between them is that the extrovertive experience looks outward through the senses, while the introvertive looks inward into the mind” (Stace, 1960, p. 61). Unfortunately, again there has been little or no systematic research into the kinds and pattern of practices that produce and have the greatest impact on mystical, spiritual experiences. The present study attempts to develop and expand upon the prior research by comparing the relative associations of meditation, yoga, contemplative prayer, and a combination of practices with mindfulness, kundalini effects, and mystical experiences. These three were chosen to represent the variety and breadth of changes that have been associated with contemplative practices. Additionally, the patterns of practice that are most highly related to these outcomes were also investigated. Mindfulness practitioners who self-reported their current contemplative practices and their patterns of practice were compared on their levels of five different aspects of mindfulness, observing, describing, acting with awareness, non-judging, non-reacting, as measured by the Five of Mindfulness Questionnaire (FFMQ, Baer et al., 2008). They were also assessed with the Kundalini Awakening Scale (KAS, Sanches & Daniels, 2008) for physical changes and the Mysticism Scale (MYST, Hood, 1975) for awakening experiences.