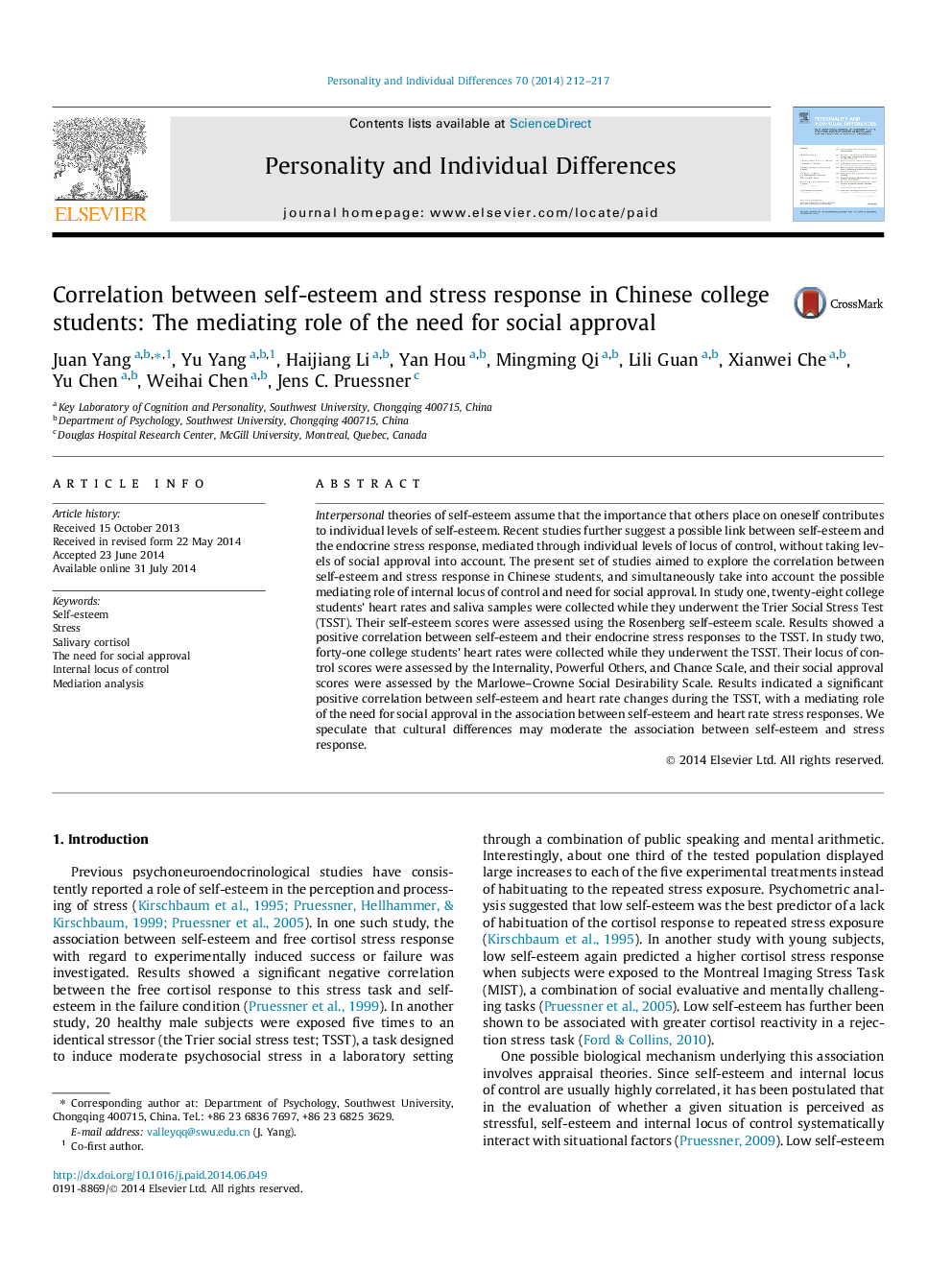 Previous psychoneuroendocrinological studies have consistently reported a role of self-esteem in the perception and processing of stress (Kirschbaum et al., 1995, Pruessner et al., 1999 and Pruessner et al., 2005). In one such study, the association between self-esteem and free cortisol stress response with regard to experimentally induced success or failure was investigated. Results showed a significant negative correlation between the free cortisol response to this stress task and self-esteem in the failure condition (Pruessner et al., 1999). In another study, 20 healthy male subjects were exposed five times to an identical stressor (the Trier social stress test; TSST), a task designed to induce moderate psychosocial stress in a laboratory setting through a combination of public speaking and mental arithmetic. Interestingly, about one third of the tested population displayed large increases to each of the five experimental treatments instead of habituating to the repeated stress exposure. Psychometric analysis suggested that low self-esteem was the best predictor of a lack of habituation of the cortisol response to repeated stress exposure (Kirschbaum et al., 1995). In another study with young subjects, low self-esteem again predicted a higher cortisol stress response when subjects were exposed to the Montreal Imaging Stress Task (MIST), a combination of social evaluative and mentally challenging tasks (Pruessner et al., 2005). Low self-esteem has further been shown to be associated with greater cortisol reactivity in a rejection stress task (Ford & Collins, 2010). One possible biological mechanism underlying this association involves appraisal theories. Since self-esteem and internal locus of control are usually highly correlated, it has been postulated that in the evaluation of whether a given situation is perceived as stressful, self-esteem and internal locus of control systematically interact with situational factors (Pruessner, 2009). Low self-esteem individuals attribute little importance to oneself, and speculate that they have little impact on the outcome of their actions, thus finding more situations uncontrollable and unpredictable, and consequently will be evaluating more situations as stressful. Conversely, high self-esteem individuals tends to be strongly associated with internal locus of control, or the confident perception that one’s outcomes are determined by one’s actions; therefore, they would not interpret the same situations as stressful as low self-esteem individuals do (Pruessner, 2009). Although traditional intrapersonal theorists have conceptualized self-esteem as a person’s private self-evaluation of one’s goodness or worth ( MacDonald, Saltzman, & leary, 2003), interpersonal theories of self-esteem suggest that people’s thoughts and feelings about themselves reflect, in part, how they believe they are perceived and evaluated by others ( Leary et al., 1998 and Leary et al., 1995). For example, according to sociometer theory, others’ reactions have such a strong effect on self-esteem because the self-esteem system itself is a subjective monitor or gauge of the degree to which the individual is being accepted and rejected by other people ( Leary, 1999 and Leary and Baumeister, 2000). Another factor that would affect the form and sources of self-esteem is cultural difference (Luk & Bond, 1992). Over the past decades, it has been suggested that the construct of individualism–collectivism may be reflected in self-esteem (Tafarodi & Swann, 1996). Basis of self-esteem in the individualistic culture is the ability to express the self and to validate internal attributes, whereas in the collectivistic culture it is the ability to adjust, to restrain the self, and to maintain harmony with social context (Markus & Kitayama, 1991). Self-esteem for those in individualistic cultures depends on one’s abilities, attributes, and achievements, whereas for those in collectivistic culture, it may be the more public aspects of the self, like one’s significant social roles, status, and important interpersonal relations, that would be focal in self-esteem maintenance (Markus & Kitayama, 1991). With regard to the possible link between self-esteem and the endocrine stress response, previous studies focused on individual levels of locus of control, however, without taking levels of social approval into account. In the current manuscript, the standardized TSST was used to examine the correlation between self-esteem and stress response in Chinese students in one study, and to examine the mediating role for either internal locus of control and/or need for social approval simultaneously in a second study. On one hand, people’s self-esteem largely depends on one’s social roles in collectivistic culture and in Chinese context, people are seeing oneself as part of an encompassing social relationship and they are recognizing that one’s behavior is determined and to a large extent organized by the thoughts, feelings, and actions of others in the relationship (Markus & Kitayama, 1991); on the other hand, social evaluative threat is prominent throughout the TSST (Dickerson & Kemeny, 2004). Therefore, we hypothesized that self-esteem and the need for social approval would interact with situational factors in the evaluation of whether a given situation is perceived as stressful. In a collectivistic culture, specifically in the Chinese context in the current study, high self-esteem individuals attribute a lot of importance to social approval, thus we speculated that they would focus on social desirability when regarding outcome of their actions. Thus, we hypothesized that these individuals would evaluate situations more stressful when they find that the situation is a threat to their needs of social approval. Conversely, low self-esteem tends to be weakly associated with social approval, or the confident perception that one’s outcomes are determined by one’s evaluation; therefore, we speculated that low self-esteem individuals would not interpret the psychosocial stressor to be as stressful as high self-esteem individuals.