عنوان انگلیسی
“Your Life Sucks,” but I think “You Deserved It”: Social approval and disapproval of messages on FMyLife.com
دانلود فوری مقاله + سفارش ترجمه 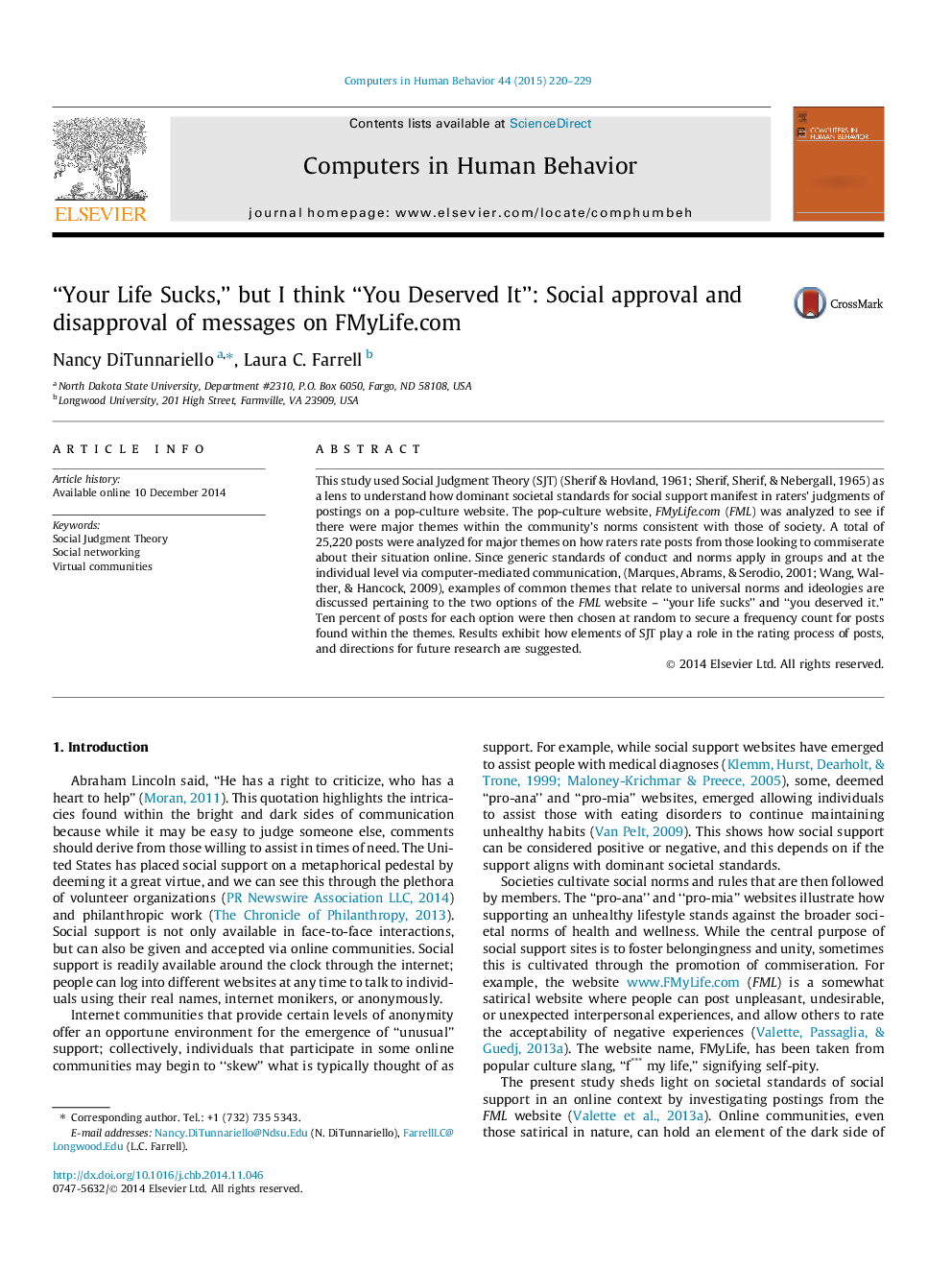 This study used Social Judgment Theory (SJT) (Sherif & Hovland, 1961; Sherif, Sherif, & Nebergall, 1965) as a lens to understand how dominant societal standards for social support manifest in raters’ judgments of postings on a pop-culture website. The pop-culture website, FMyLife.com (FML) was analyzed to see if there were major themes within the community’s norms consistent with those of society. A total of 25,220 posts were analyzed for major themes on how raters rate posts from those looking to commiserate about their situation online. Since generic standards of conduct and norms apply in groups and at the individual level via computer-mediated communication, (Marques, Abrams, & Serodio, 2001; Wang, Walther, & Hancock, 2009), examples of common themes that relate to universal norms and ideologies are discussed pertaining to the two options of the FML website – “your life sucks” and “you deserved it.” Ten percent of posts for each option were then chosen at random to secure a frequency count for posts found within the themes. Results exhibit how elements of SJT play a role in the rating process of posts, and directions for future research are suggested.

Abraham Lincoln said, “He has a right to criticize, who has a heart to help” (Moran, 2011). This quotation highlights the intricacies found within the bright and dark sides of communication because while it may be easy to judge someone else, comments should derive from those willing to assist in times of need. The United States has placed social support on a metaphorical pedestal by deeming it a great virtue, and we can see this through the plethora of volunteer organizations (PR Newswire Association LLC, 2014) and philanthropic work (The Chronicle of Philanthropy, 2013). Social support is not only available in face-to-face interactions, but can also be given and accepted via online communities. Social support is readily available around the clock through the internet; people can log into different websites at any time to talk to individuals using their real names, internet monikers, or anonymously. Internet communities that provide certain levels of anonymity offer an opportune environment for the emergence of “unusual” support; collectively, individuals that participate in some online communities may begin to “skew” what is typically thought of as support. For example, while social support websites have emerged to assist people with medical diagnoses (Klemm et al., 1999 and Maloney-Krichmar and Preece, 2005), some, deemed “pro-ana” and “pro-mia” websites, emerged allowing individuals to assist those with eating disorders to continue maintaining unhealthy habits (Van Pelt, 2009). This shows how social support can be considered positive or negative, and this depends on if the support aligns with dominant societal standards. Societies cultivate social norms and rules that are then followed by members. The “pro-ana” and “pro-mia” websites illustrate how supporting an unhealthy lifestyle stands against the broader societal norms of health and wellness. While the central purpose of social support sites is to foster belongingness and unity, sometimes this is cultivated through the promotion of commiseration. For example, the website www.FMyLife.com (FML) is a somewhat satirical website where people can post unpleasant, undesirable, or unexpected interpersonal experiences, and allow others to rate the acceptability of negative experiences ( Valette, Passaglia, & Guedj, 2013a). The website name, FMyLife, has been taken from popular culture slang, “f*** my life,” signifying self-pity. The present study sheds light on societal standards of social support in an online context by investigating postings from the FML website ( Valette et al., 2013a). Online communities, even those satirical in nature, can hold an element of the dark side of communication, yet social norms and expectations are still present. The FML website will be analyzed because of its negative undertone of self pity by taking a closer look at how raters decide whether things are worthy of an FML posting for amusement, or if the poster is looking for unwarranted sympathy. Social Judgment Theory (SJT) ( Sherif and Hovland, 1961 and Sherif et al., 1965) offers a lens for this study, to evaluate posts from the viewpoint of the rater to explore what types of comments individuals find appropriate or inappropriate. Since individuals have different latitudes of acceptance and rejection, this study uncovers broad patterns from raters’ responses indicating that societal norms do exist when passing judgment anonymously online.

This study sought to explain how societal standards for social support are revealed in raters judgments of postings to the FML website. As a result of the analysis, it was uncovered that raters do use social judgment grounded in universal ideologies and morals when deciding how to rate a post. This process then cultivates a community culture within the FML website that is consistent with research explain how community values emerge through member interaction ( Jin et al., 2012). Using context analysis, the FML website was analyzed both at the relational and procedural levels of analysis to uncover why raters vote the way they do and the relationship between the elements and themes that emerged. The themes and subthemes that came to light give a better understanding to what members of the FML community deem as appropriate and inappropriate. Although this study used SJT as a lens to better understand how the dominant societal standards for social support manifest in raters’ judgments of FML postings, this study is not without limitations. First, only 10% of randomized postings for each of the two main voting categories were included within the frequency counts. While 10% may seem low, this 10% was randomized within the FML website layout, and all of the posts where considered when developing themes and subthemes. Also, the analysis of the 10% of FML posts occurred over several months and did not account for any major changes in randomized order. However, the consistent changes to the website format reinforced the randomization of codes, and since these posts were considered the “top” postings per main category, the difference between raters attitudes, and the consistency behind what was considered appropriate and inappropriate was large enough to where three months would not highly skew these results. This study provides insight into how raters lend their approval or disapproval of posted messages, but did not analyze the comment options to understand any responses or questions raters had as they journeyed to pass judgment on posters. Further analysis of comments could provide more information behind social judgments. Along these lines, future studies may want to analyze similar websites that have spawned since the creation of FML. For example, another website with similar functionality is called MyLifeIsAverage ( Corniche, 2014). Here posters discuss the mundane and raters decide how average the posts are in comparison to daily life. Another area for possible future research would be the element of the current hash-tag culture. Although the use of the FML website has decreased since it’s early years, the term “FML” continues to be incorporated into different forms of social media in the form of it’s own hash-tag – #FML. Since technology is consistently changing and online communities are also evolving in their functionality, it would be interesting to analyze the #FML culture to see if there are any broad themes that could apply to universal norms and ideologies. Overall, this study shines a light on the approval and disapproval of messages on a current pop-culture website and online community. Interestingly, while the FML website is not formulated like a majority of social support websites based around health and wellness, the creators of the humorous website insist that the website’s goal is to show others that they are not alone and they can have an online space to commiserate together ( Barnesandnoble.com, LLC, 2013b, para. 1). This study sought to understand a fraction of pop-culture social judgments, and as virtual communities continue to evolve and new cultures emerge, it is also important to understand what fuels these social judgments, and if patterns continue to exist or surface.