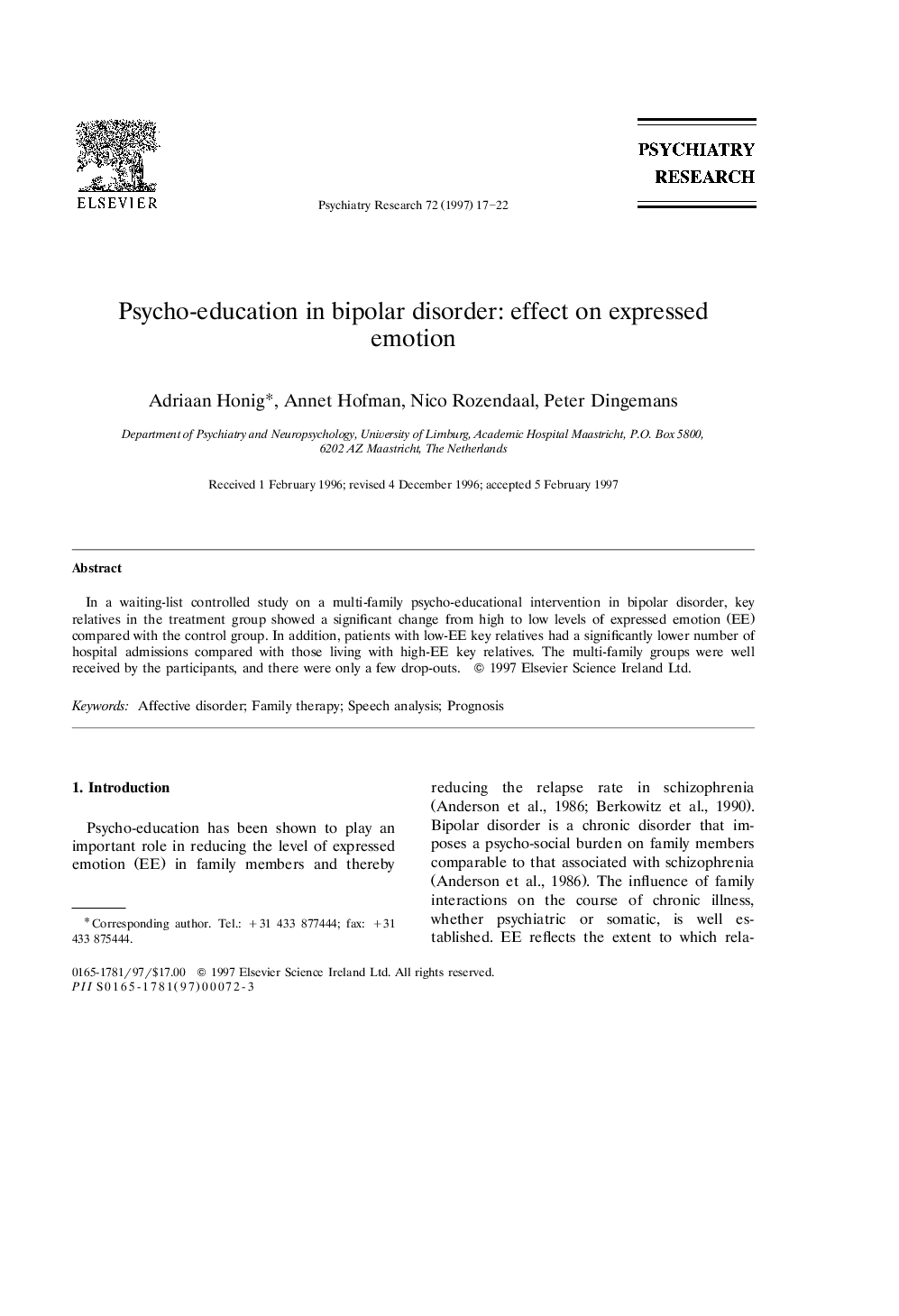 Abstract In a waiting-list controlled study on a multi-family psycho-educational intervention in bipolar disorder, key relatives in the treatment group showed a significant change from high to low levels of expressed emotion (EE) compared with the control group. In addition, patients with low-EE key relatives had a significantly lower number of hospital admissions compared with those living with high-EE key relatives. The multi-family groups were well received by the participants, and there were only a few drop-outs. © 1997 Elsevier Science Ireland Ltd.

1. Introduction Psycho-education has been shown to play an important role in reducing the level of expressed emotion (EE) in family members and thereby reducing the relapse rate in schizophrenia (Anderson et al., 1986; Berkowitz et al., 1990). Bipolar disorder is a chronic disorder that imposes a psycho-social burden on family members comparable to that associated with schizophrenia (Anderson et al., 1986). The influence of family interactions on the course of chronic illness, whether psychiatric or somatic, is well established. EE reflects the extent to which relatives of patients express critical, hostile, or emotionally overinvolved attitudes towards their disturbed family member. High EE in family members proved to be a predictor of relapse in schizophrenia (Parker and Hadzi-Pavlovic, 1990), recent onset mania (Miklowitz et al., 1987), bipolar disorder (Priebe et al., 1989; O'Connell et al., 1991), and unipolar disorder (Hooley and Teasdale, 1989). Interventions designed to reduce levels of EE in family members include psycho-education and training in communication skills and problem solving. These interventions have been shown to lower the levels of EE in key relatives of schizophrenic patients (Leff et al., 1982; Hogarty et al., 1986; Tarrier et al., 1988). Psycho-educational programs have also been developed for bipolar disorder (Anderson et al., 1986) and major depressive disorder (Glick et al., 1994), as well as for specific treatment modalities such as a videotaped educational program for patients being treated with lithium (Peet and Harvey, 1991). Exposure to such programs is associated with improved outcome (Glick et al., 1994), but increased medical knowledge, per se, has not been shown to be effective (Berkowitz et al., 1990), as patients cannot apply textbook psychiatry to their individual cases. Although education will certainly help those involved to overcome their general misinformation and fear related to the illness, psycho-educational programs have broader aims than merely imparting information. They are designed to provide both patients and key relatives with a neutral but engaging introduction to a therapeutic relationship. To date, little information is available about the effects of psycho-educational programs on the level of EE of key relatives in bipolar disorder. The EE assessment instrument used in this study is the Five-Minute Speech Sample (FMSS; Magaña et al., 1986). In this procedure, the key relative (not in the presence of the patient) is asked to speak without interruption for 5 min about what kind of person the patient is and how they get along together. The FMSS is a simple and valid instrument for the measurement of EE. Its scores show a high degree of correspondence with those of the more time-consuming Camberwell Family Interview (Magaña et al., 1986; Leeb et al., 1991; Malla et al., 1991; Stark and Buchkremer, 1992), although ratings derived from the FMSS show some underestimation of high-EE scores (Malla et al., 1991). In our clinic, the first author developed a psycho-educational program for bipolar disorder (Hofman et al., 1992; Honig et al., 1995). This program focuses on the provision of illness-related information, on methods of coping more effectively with the illness, and on the recognition of the need for support by both patients and family members. The hypothesis tested in this study was that psycho-education would lower EE levels of key relatives in the treatment groups and not in the waiting-list control group. In addition, it was hypothesized that this type of intervention would fulfil a need of both patients and key relatives.

3. Results There were no statistically significant differences between patients in the treatment and control groups in age, duration of illness, number of relapses, duration of remission, lithium dose, number of admissions, Brief Psychiatric Rating Scale score, and level of pre-treatment EE. Table 1 presents the EE ratings in both groups. As a main finding, nine key relatives (31%) in the treatment group changed from high (H) to low (L) EE rating (in the following called HL group) compared with none in the control group (P<0.03; McNemar Change Test). Table 1. Pre- and post-course EE between treatment and control group measurements of BD EE level Treatment Control EE EE Pre Post n Group % n Group % Low Low 16 56 14 62 High High 3a 10 8b 34 High Low 9c 31* 0 0 Low High 1 3 1 4 Total 29 100 23 100 EE level % means percentage of EE level group. *P<0.03. a1 critical, 2 overinvolved. b5 critical, 1 overinvolved and 2 both critical and overinvolved. c4 critical, 5 overinvolved. Statistical analysis: for statistical analysis we used SPSS® for Macintosh (version 4.0). Continuous variables were compared by means of Student's t-test. Furthermore, for non-continuous variables we used the Mann-Whitney U and Pearsons χ2 — if necessary with Yates correction — test and/or Fisher Exact as appropriate. The dichotomous outcome measure (EE-level) was analyzed using the McNemar Change Test. Table options 3.1. FMSS-based EE and relapse rate The dosage of lithium was significantly lower for patients in the continuously high EE group (P<0.01). The comparison of all key relatives in both treatment and control groups with continuously high and continuously low EE levels revealed that the average number of admissions to hospital before this study was significantly lower in the continuously low EE population (P<0.05). The levels of EE seemed to be stable over a 3-month period as more than 75% of the EE ratings remained unchanged in both treatment and control groups. 3.2. Evaluation by the participants The participation of key relatives was perceived by the patients as fruitful. The key relatives regarded their participation as a recognition of their experience and expertise, as in the past they often had felt excluded from therapy and professional support. The exchange of information with and support from others in similar circumstances was unanimously perceived as positive. The subjective effects in the patients were predominantly feelings of control over bipolar disorder (62%). Also, the relationship with the participating key relatives was felt to be positively influenced by the program. Acceptance of bipolar disorder was in 59% of the patients subjectively enhanced by the program. After the study's completion, most participants continued in some form of self-help group or joined the National Manic-Depressives Foundation.