عنوان انگلیسی
Psychoeducation for hypochondriasis: A comparison of a cognitive-behavioural approach and a problem-solving approach
دانلود فوری مقاله + سفارش ترجمه 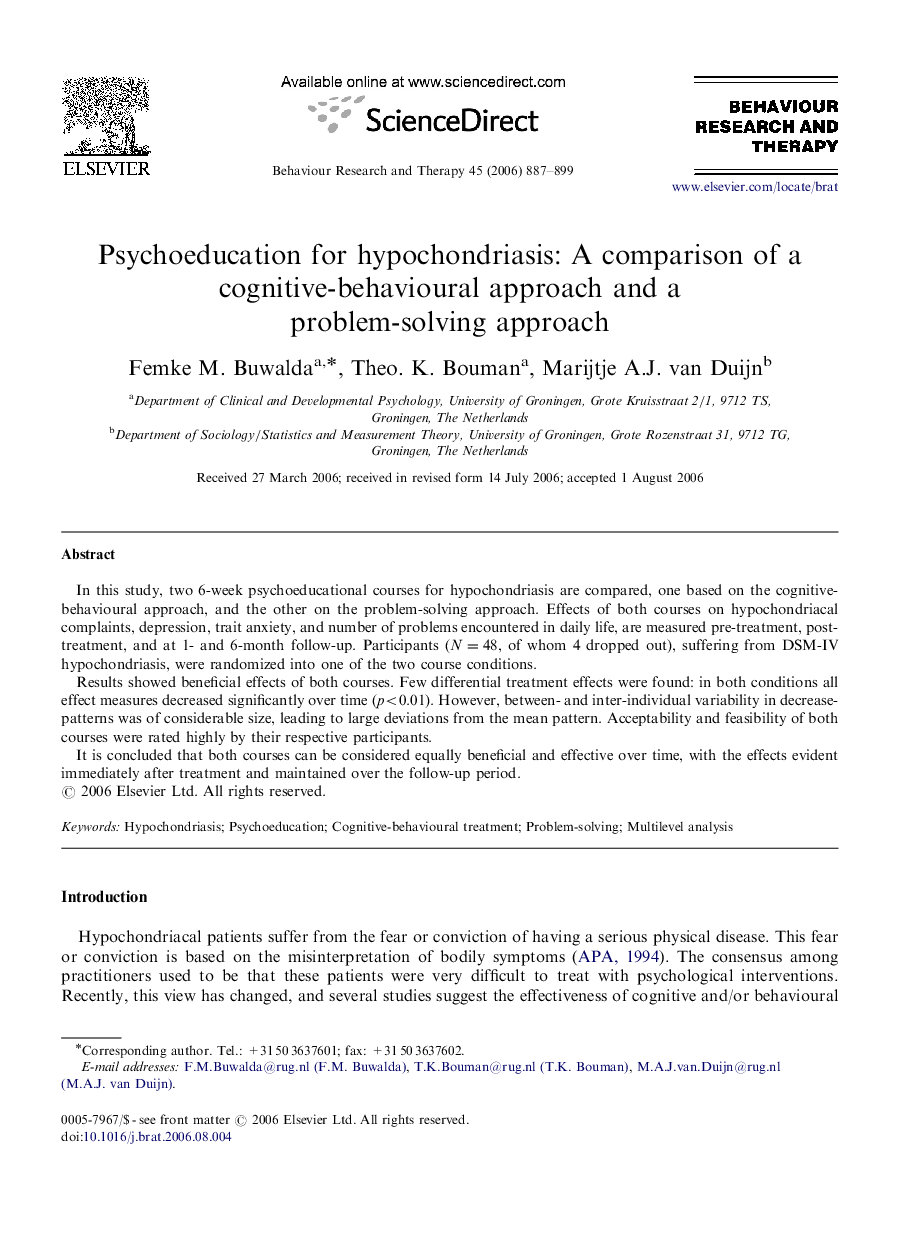 Abstract In this study, two 6-week psychoeducational courses for hypochondriasis are compared, one based on the cognitive-behavioural approach, and the other on the problem-solving approach. Effects of both courses on hypochondriacal complaints, depression, trait anxiety, and number of problems encountered in daily life, are measured pre-treatment, post-treatment, and at 1- and 6-month follow-up. Participants (N=48N=48, of whom 4 dropped out), suffering from DSM-IV hypochondriasis, were randomized into one of the two course conditions. Results showed beneficial effects of both courses. Few differential treatment effects were found: in both conditions all effect measures decreased significantly over time (p<0.01). However, between- and inter-individual variability in decrease-patterns was of considerable size, leading to large deviations from the mean pattern. Acceptability and feasibility of both courses were rated highly by their respective participants. It is concluded that both courses can be considered equally beneficial and effective over time, with the effects evident immediately after treatment and maintained over the follow-up period.

Introduction Hypochondriacal patients suffer from the fear or conviction of having a serious physical disease. This fear or conviction is based on the misinterpretation of bodily symptoms (APA, 1994). The consensus among practitioners used to be that these patients were very difficult to treat with psychological interventions. Recently, this view has changed, and several studies suggest the effectiveness of cognitive and/or behavioural interventions (Barsky & Ahern, 2004; Visser & Bouman, 2001; Warwick, Clark, Cobb, & Salkovskis, 1996; for a recent overview see Taylor & Asmundson, 2004). Cognitive-behavioural therapy (CBT) for hypochondriasis is usually based on a cognitive model (Warwick & Salkovskis, 1990), which focuses on the various concepts that seem to maintain or even bring about hypochondriacal complaints: the misinterpretation of bodily symptoms, anxiety, selective attention for bodily sensations, and checking and/or avoidance behaviour. The treatment goal is a change in hypochondriacal cognitions and behaviour. Another form of treatment with known beneficial effects is psychoeducation, which is among the most effective of the evidence-based practices that have emerged in both clinical trials and community settings (Lukens & McFarlane, 2004). Historically, psychoeducation has been described as the teaching of personal and interpersonal attitudes and skills which the individual applies to solve present and future psychological problems (Guerney, Stollak, & Guerney, 1971). It regards people who seek help as ‘participants’ rather than as ‘patients’ or ‘clients’, and ‘therapists’ as ‘teachers’. Its original goal is to move participants away from the medical model. Furthermore, psychoeducation reflects a paradigm shift to a more holistic and competence-based approach (Marsh, 1992). The psychoeducational format has often been combined with CB theory, and is usually disseminated in the form of short-term, focused courses, aimed at people who function relatively well, to teach them about their disorder. Barsky, Geringer, and Wool (1988) were the first to propose a psychoeducational course for hypochondriasis, and their suggestion was followed by several others (Avia et al. (1997) and Avia et al. (1996)). The course developed by Barsky et al. (1988) is a cognitive-educational treatment, consisting of group training on the perception and interpretation of physical symptoms. It comprises six weekly meetings, during which six to eight patients receive information about factors that can enhance or prolong somatic problems, such as cognition and symptom attribution, and dysphoric affect (Barsky et al., 1988). Stern and Fernandez (1991) found the treatment, in a group of six participants, to be successful in reducing complaints such as medical consultations and time spent thinking about disease. They did not find a significant decrease in measured anxiety and depression parameters. Avia et al. (1997) implemented the course in Spain, with modified examples, exercises and therapeutic homework. They reported beneficial effects in a group of 17 students, of whom only eight actually suffered from DSM-III-R hypochondriasis. After making considerable adaptations, Bouman applied the course in The Netherlands. This community-based course was studied in an uncontrolled trial (Bouman, 2002), and in a waiting list-controlled trial (Bouman & Polman, submitted). A total of 27 DSM IV-diagnosed hypochondriacal participants (APA, 1994) were included in the first, and 53 in the second study. The results support the notion that this programme leads to significantly reduced hypochondriacal complaints, depressive complaints, medical services utilisation, and trait anxiety. These improvements were maintained at six months follow-up. In the waitlist-controlled study (Bouman & Polman, submitted), the course also outperformed the passage of time. So far, psychoeducation seems to be successful in mitigating hypochondriacal and comorbid complaints in hypochondriacal populations. Although most studies mentioned earlier used small sample groups without control groups, a case has been made for the internal validity of psychoeducation. Moreover, psychoeducational courses have been proven to outperform mere passage of time (Bouman & Polman, submitted). However, little is known about its construct validity, i.e. the question whether the relation between the intervention and behaviour change is due to the construct given by the investigator (Kazdin, 1998). In the context of individual treatment, the question of construct validity was studied earlier by Clark et al. (1998). They compared individual CB treatment to individual behavioural stress management, finding both approaches to be equally powerful in reducing hypochondriacal complaints at 1-year follow-up of both treatments. To seek an answer to the question of construct validity, we decided to compare the CB psychoeducational group treatment with problem solving (PS), delivered in a similar format. The PS course was specifically designed for the purpose of this study. Its content was based upon the social PS approach (D’Zurilla & Nezu, 1999) that involves the application of four major PS skills: problem definition and formulation, generation of alternative solutions, decision making, and solution implementation and verification. The PS approach used in this study is model-based, structured, and directive, to ensure its format to be similar to that of the CB-course's, and have them differ only in specific content (see Method for more details). Our main reason for choosing PS is that this approach puts hypochondriacal complaints into a broader context. All aspects of life, including possible comorbid depression, anxiety, and relationship problems, can be considered in PS treatment, not just hypochondriacal complaints. These problems are thought to play a maintaining and antecedent role, and once they are reduced, this is assumed to have a positive effect on hypochondriasis. It should be noted that we did not aim to test the PS model per se, but only its approach in a psychoeducational framework. Therefore, in this study it is hypothesized that the psychoeducational approach in itself has beneficial effects over time, implying a significant improvement on effect measures for both the CB- and the PS-course. In addition, the CB-course is expected to lead to a greater reduction of hypochondriacal symptomatology, because of its more specific focus on this disorder.