عنوان انگلیسی
What are the elements of motivation for acquisition of conditioned taste aversion?
دانلود فوری مقاله + سفارش ترجمه 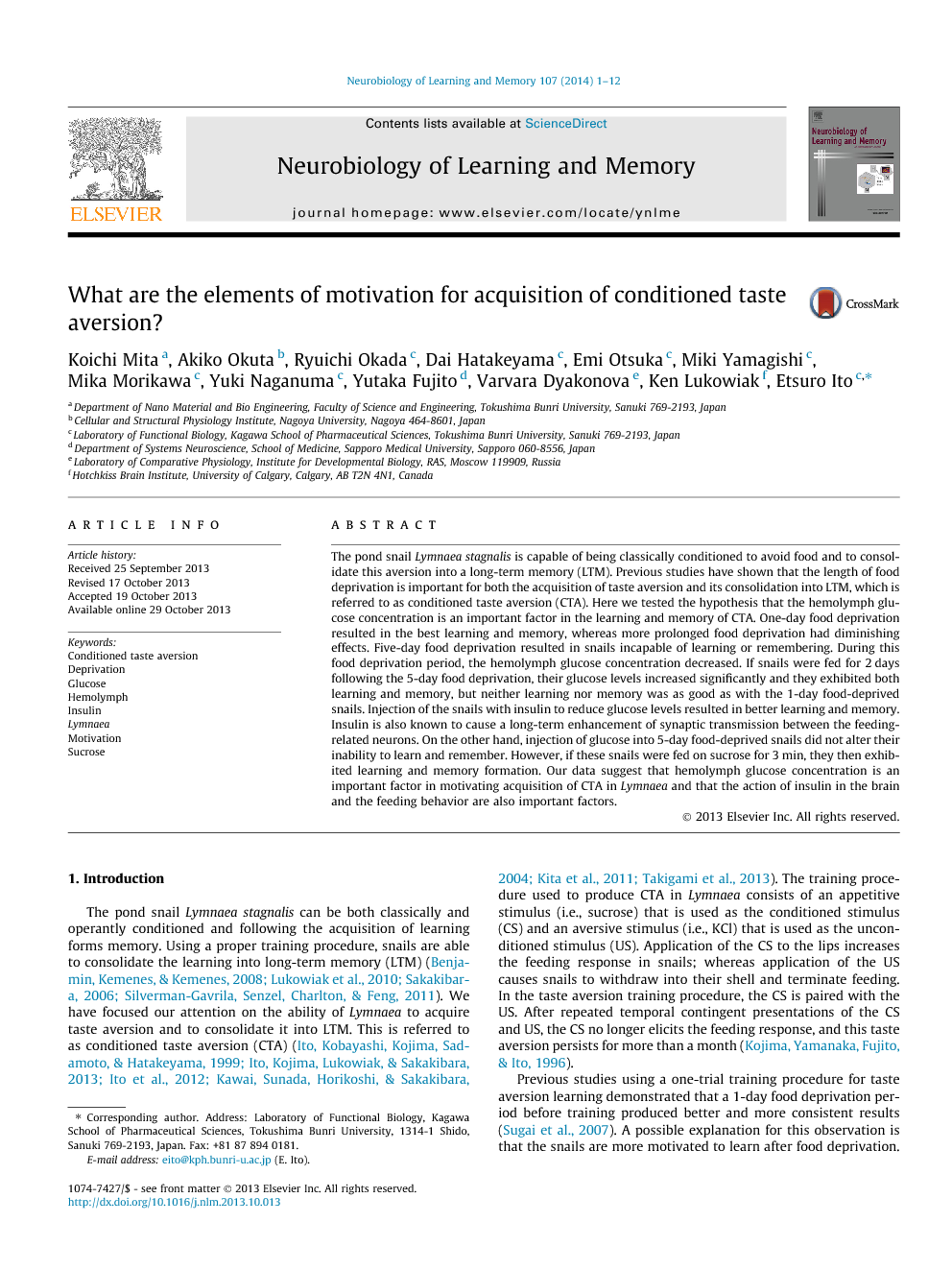 Abstract The pond snail Lymnaea stagnalis is capable of being classically conditioned to avoid food and to consolidate this aversion into a long-term memory (LTM). Previous studies have shown that the length of food deprivation is important for both the acquisition of taste aversion and its consolidation into LTM, which is referred to as conditioned taste aversion (CTA). Here we tested the hypothesis that the hemolymph glucose concentration is an important factor in the learning and memory of CTA. One-day food deprivation resulted in the best learning and memory, whereas more prolonged food deprivation had diminishing effects. Five-day food deprivation resulted in snails incapable of learning or remembering. During this food deprivation period, the hemolymph glucose concentration decreased. If snails were fed for 2 days following the 5-day food deprivation, their glucose levels increased significantly and they exhibited both learning and memory, but neither learning nor memory was as good as with the 1-day food-deprived snails. Injection of the snails with insulin to reduce glucose levels resulted in better learning and memory. Insulin is also known to cause a long-term enhancement of synaptic transmission between the feeding-related neurons. On the other hand, injection of glucose into 5-day food-deprived snails did not alter their inability to learn and remember. However, if these snails were fed on sucrose for 3 min, they then exhibited learning and memory formation. Our data suggest that hemolymph glucose concentration is an important factor in motivating acquisition of CTA in Lymnaea and that the action of insulin in the brain and the feeding behavior are also important factors.

. Introduction The pond snail Lymnaea stagnalis can be both classically and operantly conditioned and following the acquisition of learning forms memory. Using a proper training procedure, snails are able to consolidate the learning into long-term memory (LTM) ( Benjamin et al., 2008, Lukowiak et al., 2010, Sakakibara, 2006 and Silverman-Gavrila et al., 2011). We have focused our attention on the ability of Lymnaea to acquire taste aversion and to consolidate it into LTM. This is referred to as conditioned taste aversion (CTA) ( Ito et al., 1999, Ito et al., 2013, Ito et al., 2012, Kawai et al., 2004, Kita et al., 2011 and Takigami et al., 2013). The training procedure used to produce CTA in Lymnaea consists of an appetitive stimulus (i.e., sucrose) that is used as the conditioned stimulus (CS) and an aversive stimulus (i.e., KCl) that is used as the unconditioned stimulus (US). Application of the CS to the lips increases the feeding response in snails; whereas application of the US causes snails to withdraw into their shell and terminate feeding. In the taste aversion training procedure, the CS is paired with the US. After repeated temporal contingent presentations of the CS and US, the CS no longer elicits the feeding response, and this taste aversion persists for more than a month ( Kojima, Yamanaka, Fujito, & Ito, 1996). Previous studies using a one-trial training procedure for taste aversion learning demonstrated that a 1-day food deprivation period before training produced better and more consistent results (Sugai et al., 2007). A possible explanation for this observation is that the snails are more motivated to learn after food deprivation. Motivation certainly plays an important role in learning (Klahr et al., 2011, Pompilio et al., 2006 and Walters et al., 1981). The 1-day food deprivation did not alter behaviors such as egg laying or aerial respiration, and did not result in any change in the general health of snails, such as evidenced by a change in mortality rate. However, more is not better always, because food deprivation for 5 days blocked taste aversion learning and its consolidation into LTM (Sugai et al., 2007). The 5-day food deprivation period might decrease the motivation for learning as the snail struggles to devise a survival strategy (Matsuo, Hitomi, Watanabe, & Kirino, 2002). We hypothesized here that the level of motivation in the snails might be correlated with the hemolymph glucose concentration, which may be controlled by a ‘spike’ in insulin secretion triggered by the CS. We therefore examined the relationship among the duration of the food deprivation period, the learning and memory-forming ability as assessed by the number of good vs. poor performers based on the definitions of Sugai et al., 2007, and the hemolymph glucose concentration in Lymnaea CTA. The basis of our insulin hypothesis was our previous observation that molluscan insulin-related peptides (MIPs) were up-regulated in snails exhibiting CTA-LTM (Azami et al., 2006). We more recently showed at the electrophysiological level that the application of MIPs caused a long-term enhancement of synaptic transmission between the cerebral giant cell (CGC, a key interneuron for CTA) and the buccal B1 motor neuron (Murakami, Okada, Sadamoto, et al., 2013). This synaptic change has been hypothesized to play a key role in the CTA-LTM consolidation process. In further support of this hypothesis, we found that application of an insulin receptor antibody to the Lymnaea central nervous system (CNS) blocked the long-term enhancement of synaptic transmission. Finally, injection of the antibody into Lymnaea inhibited LTM formation ( Murakami, Okada, Sadamoto, et al., 2013). Therefore, we have to take into consideration the role played by glucose and insulin in CTA-LTM formation. Insulin secretion in the snail not only controls glucose concentration but also alters synaptic plasticity. In the present study, therefore, we examined taste aversion learning and LTM formation by observing the direct effects of changes in glucose concentration on the number of good vs. poor learning and memory performers. These experiments included various lengths of food deprivation, injection of glucose or insulin, and ingestion of sucrose. Our results suggest a strong correlation between the motivation of Lymnaea to acquire CTA and the hemolymph glucose concentration, and indicate that this relation may be controlled by insulin secretion.

In Lymnaea, learning ability and memory formation of CTA are modulated (both positively and negatively) by food deprivation. The length of the period of food deprivation as well as the time with access to food following food deprivation all alter how well or how poorly snails learn and remember. Our working hypothesis is that the availability of sufficient insulin in the CNS at the right time (i.e., CNS spike) is what determines in large measure whether snails are good or poor performers on memory tasks. The availability of insulin and its release at the appropriate time in the CNS are dependent in part on the hemolymph glucose concentration, because maintaining glucose levels within tight physiological boundaries is of the upmost importance. Maintaining glucose homeostasis is probably far more important for the snail than learning new tricks; especially when those new tricks involve avoiding food when the snail is hungry.