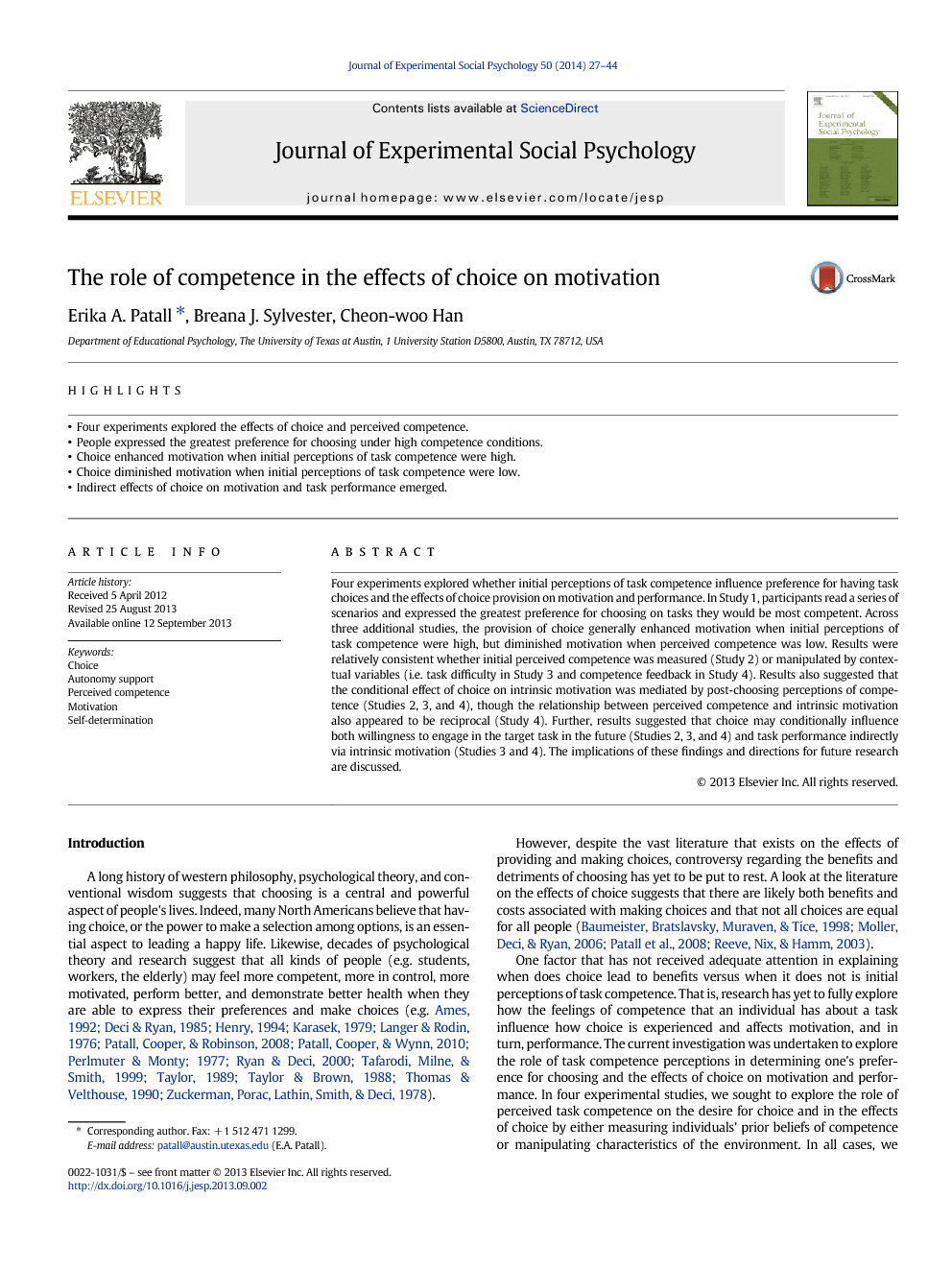 Abstract Four experiments explored whether initial perceptions of task competence influence preference for having task choices and the effects of choice provision on motivation and performance. In Study 1, participants read a series of scenarios and expressed the greatest preference for choosing on tasks they would be most competent. Across three additional studies, the provision of choice generally enhanced motivation when initial perceptions of task competence were high, but diminished motivation when perceived competence was low. Results were relatively consistent whether initial perceived competence was measured (Study 2) or manipulated by contextual variables (i.e. task difficulty in Study 3 and competence feedback in Study 4). Results also suggested that the conditional effect of choice on intrinsic motivation was mediated by post-choosing perceptions of competence (Studies 2, 3, and 4), though the relationship between perceived competence and intrinsic motivation also appeared to be reciprocal (Study 4). Further, results suggested that choice may conditionally influence both willingness to engage in the target task in the future (Studies 2, 3, and 4) and task performance indirectly via intrinsic motivation (Studies 3 and 4). The implications of these findings and directions for future research are discussed.

Introduction A long history of western philosophy, psychological theory, and conventional wisdom suggests that choosing is a central and powerful aspect of people's lives. Indeed, many North Americans believe that having choice, or the power to make a selection among options, is an essential aspect to leading a happy life. Likewise, decades of psychological theory and research suggest that all kinds of people (e.g. students, workers, the elderly) may feel more competent, more in control, more motivated, perform better, and demonstrate better health when they are able to express their preferences and make choices (e.g. Ames, 1992, Deci and Ryan, 1985, Henry, 1994, Karasek, 1979, Langer and Rodin, 1976, Patall et al., 2008, Patall et al., 2010, Perlmuter and Monty, 1977, Ryan and Deci, 2000, Tafarodi et al., 1999, Taylor, 1989, Taylor and Brown, 1988, Thomas and Velthouse, 1990 and Zuckerman et al., 1978). However, despite the vast literature that exists on the effects of providing and making choices, controversy regarding the benefits and detriments of choosing has yet to be put to rest. A look at the literature on the effects of choice suggests that there are likely both benefits and costs associated with making choices and that not all choices are equal for all people (Baumeister et al., 1998, Moller et al., 2006, Patall et al., 2008 and Reeve et al., 2003). One factor that has not received adequate attention in explaining when does choice lead to benefits versus when it does not is initial perceptions of task competence. That is, research has yet to fully explore how the feelings of competence that an individual has about a task influence how choice is experienced and affects motivation, and in turn, performance. The current investigation was undertaken to explore the role of task competence perceptions in determining one's preference for choosing and the effects of choice on motivation and performance. In four experimental studies, we sought to explore the role of perceived task competence on the desire for choice and in the effects of choice by either measuring individuals' prior beliefs of competence or manipulating characteristics of the environment. In all cases, we expected to find that while choosing would be more desirable and motivating when expectations for success are high, it would be less desired and possibly de-motivating when expectations for success were low