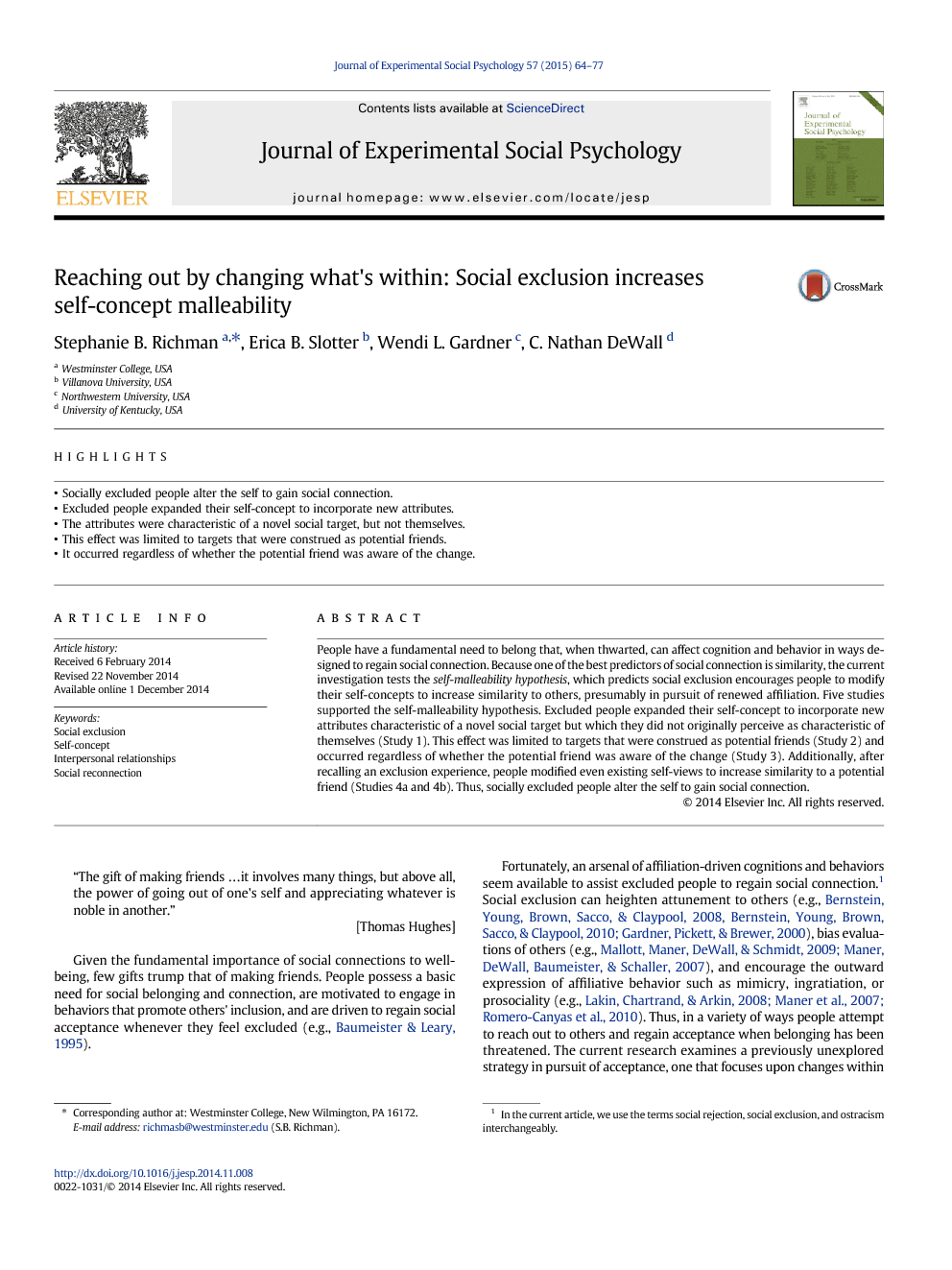 People have a fundamental need to belong that, when thwarted, can affect cognition and behavior in ways designed to regain social connection. Because one of the best predictors of social connection is similarity, the current investigation tests the self-malleability hypothesis, which predicts social exclusion encourages people to modify their self-concepts to increase similarity to others, presumably in pursuit of renewed affiliation. Five studies supported the self-malleability hypothesis. Excluded people expanded their self-concept to incorporate new attributes characteristic of a novel social target but which they did not originally perceive as characteristic of themselves (Study 1). This effect was limited to targets that were construed as potential friends (Study 2) and occurred regardless of whether the potential friend was aware of the change (Study 3). Additionally, after recalling an exclusion experience, people modified even existing self-views to increase similarity to a potential friend (Studies 4a and 4b). Thus, socially excluded people alter the self to gain social connection.

“The gift of making friends …it involves many things, but above all, the power of going out of one's self and appreciating whatever is noble in another.” Thomas Hughes Given the fundamental importance of social connections to well-being, few gifts trump that of making friends. People possess a basic need for social belonging and connection, are motivated to engage in behaviors that promote others' inclusion, and are driven to regain social acceptance whenever they feel excluded (e.g., Baumeister & Leary, 1995). Fortunately, an arsenal of affiliation-driven cognitions and behaviors seem available to assist excluded people to regain social connection.1 Social exclusion can heighten attunement to others (e.g., Bernstein et al., 2008, Bernstein et al., 2010 and Gardner et al., 2000), bias evaluations of others (e.g., Mallott et al., 2009 and Maner et al., 2007), and encourage the outward expression of affiliative behavior such as mimicry, ingratiation, or prosociality (e.g., Lakin et al., 2008, Maner et al., 2007 and Romero-Canyas et al., 2010). Thus, in a variety of ways people attempt to reach out to others and regain acceptance when belonging has been threatened. The current research examines a previously unexplored strategy in pursuit of acceptance, one that focuses upon changes within the self-concept rather than toward perceptions of others. Specifically, by going “out of one's self” when trying to enhance social connection, we hypothesized that one path to this affiliation might be a willingness to mold the self to be more similar to others—a process we have termed self-concept malleability. Exclusion-induced self-concept malleability may take the form of expanding the self-concept to take on new characteristics (self-expansion), or even of modifying existing self-views to become more similar to a potential friend (self-modification). Because perceived similarity is a robust predictor of liking and relationship benefits in a variety of social contexts (e.g. Amodio and Showers, 2005, Byrne, 1971 and Murray et al., 2000), self-concept malleability may be an effective means through which socially excluded people can earn acceptance. To test this self-concept malleability hypothesis, we conducted five experiments. Specifically, we tested whether exclusion motivates people to attempt affiliation with another person by taking on new attributes of this person (Study 1). We also examined whether this motivation applies only to others with whom there is the potential for friendship and thus the opportunity to regain social connection (Study 2). Additionally, we investigated whether this effect occurred above and beyond concerns with self-presentation, specifically to situations in which potential friends were unaware of the change (Study 3). Finally, we examined whether excluded people would modify their existing self-views, (for example, views of themselves as risky or cautious, or as financially risky or cautious), to be more similar to a potential friend (Studies 4a and 4b).