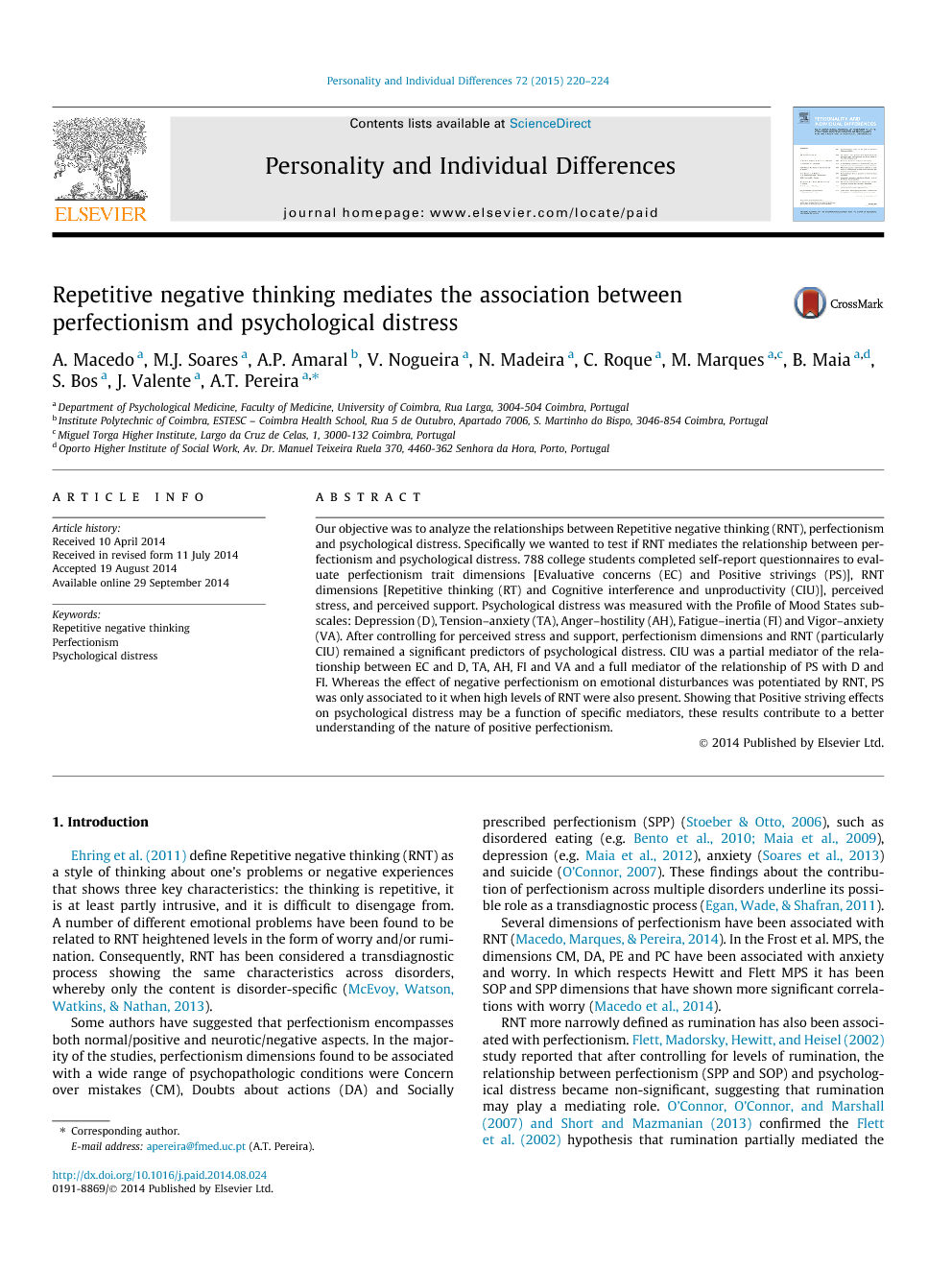 Ehring et al. (2011) define Repetitive negative thinking (RNT) as a style of thinking about one’s problems or negative experiences that shows three key characteristics: the thinking is repetitive, it is at least partly intrusive, and it is difficult to disengage from. A number of different emotional problems have been found to be related to RNT heightened levels in the form of worry and/or rumination. Consequently, RNT has been considered a transdiagnostic process showing the same characteristics across disorders, whereby only the content is disorder-specific (McEvoy, Watson, Watkins, & Nathan, 2013). Some authors have suggested that perfectionism encompasses both normal/positive and neurotic/negative aspects. In the majority of the studies, perfectionism dimensions found to be associated with a wide range of psychopathologic conditions were Concern over mistakes (CM), Doubts about actions (DA) and Socially prescribed perfectionism (SPP) (Stoeber & Otto, 2006), such as disordered eating (e.g. Bento et al., 2010 and Maia et al., 2009), depression (e.g. Maia et al., 2012), anxiety (Soares et al., 2013) and suicide (O’Connor, 2007). These findings about the contribution of perfectionism across multiple disorders underline its possible role as a transdiagnostic process (Egan, Wade, & Shafran, 2011). Several dimensions of perfectionism have been associated with RNT (Macedo, Marques, & Pereira, 2014). In the Frost et al. MPS, the dimensions CM, DA, PE and PC have been associated with anxiety and worry. In which respects Hewitt and Flett MPS it has been SOP and SPP dimensions that have shown more significant correlations with worry (Macedo et al., 2014). RNT more narrowly defined as rumination has also been associated with perfectionism. Flett, Madorsky, Hewitt, and Heisel (2002) study reported that after controlling for levels of rumination, the relationship between perfectionism (SPP and SOP) and psychological distress became non-significant, suggesting that rumination may play a mediating role. O’Connor et al., 2007 and Short and Mazmanian, 2013 confirmed the Flett et al. (2002) hypothesis that rumination partially mediated the effects of perfectionism in emotional distress. More recently, Perfectionistic concerns, which is a higher order dimension, has also been associated with rumination, and considered a fully mediator of the relationship between perfectionistic concerns and depressive symptoms (Di Schiena, Luminet, Philippot, & Douilliez, 2012). Furthermore, there is evidence for this relationship arising from studies using a transdiagnostical definition of RNT. Using the Portuguese versions of the Perseverative Thinking Questionnaire (Chaves et al., 2013), it was found that the most negative component of the RNT, Cognitive interference and unproductivity (CIU), partially mediated the relationship between SPP and negative affect and completely mediated the relationship between SOP and negative affect (Pereira et al., 2014). To our knowledge, the potential mediator role of the RNT, measured using a transdiagnostic approach, between higher order dimensions of perfectionism and psychological distress (PD) was not explored yet. An additional strength of the present study is the use of a RNT assessment instrument which is content free and consequently contributes to circumvent a source of bias and causal circularity in which respects the association between perfectionism and PD. The objective of the present work is to test if the transdiagnostic RNT dimensions mediate the relationship between positive and negative perfectionism dimensions and psychological distress, controlling for perceived stress and social support. Note that proponents of diathesis-stress have asserted that perfectionism relate more strongly to psychological distress under higher levels of stress (e.g. Hewitt, Flett, & Ediger, 1996) and lower levels of social support (Sherry, Law, Hewitt, Flett, & Bess