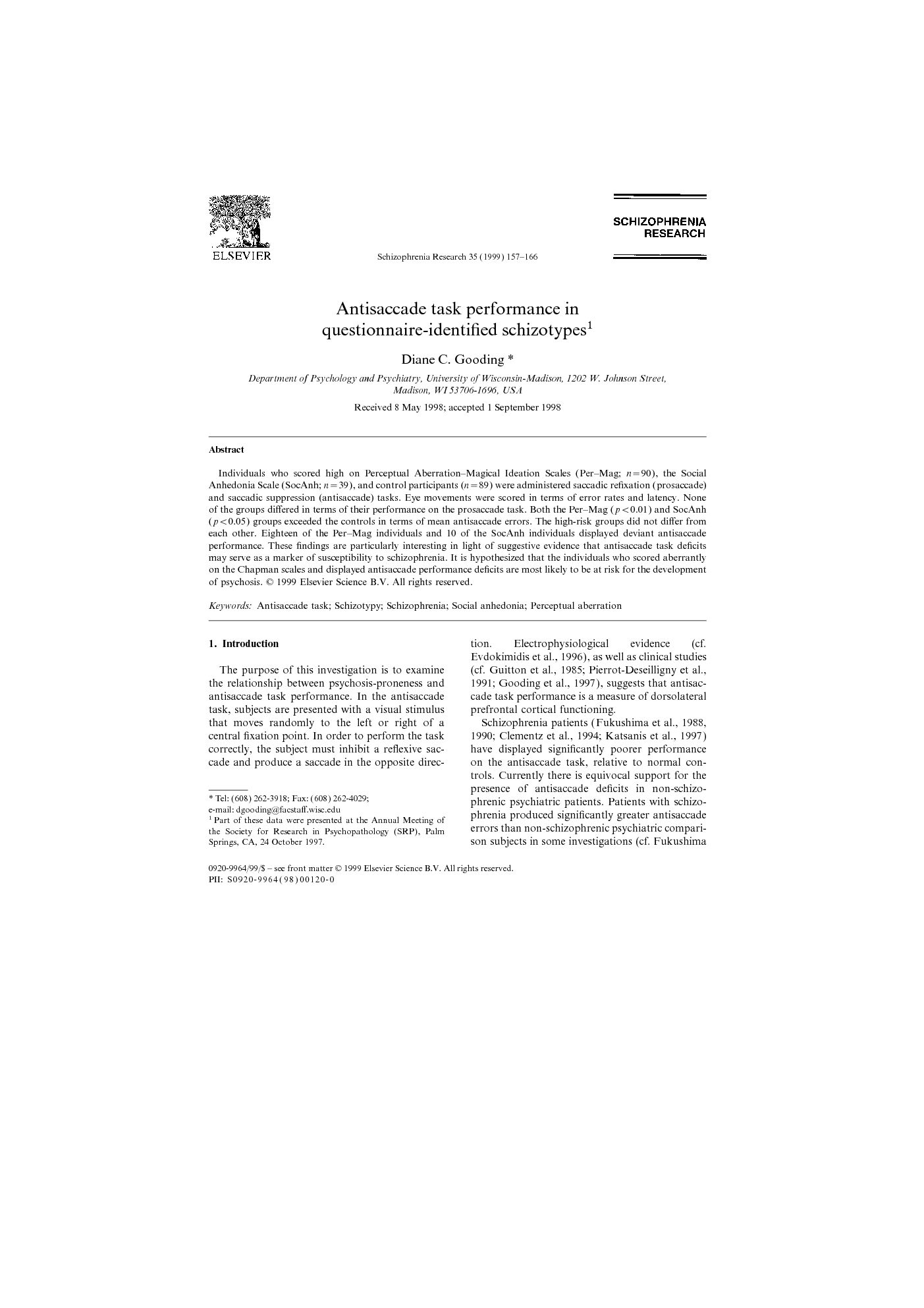 Individuals who scored high on Perceptual Aberration–Magical Ideation Scales (Per–Mag; n=90), the Social Anhedonia Scale (SocAnh; n=39), and control participants (n=89) were administered saccadic refixation (prosaccade) and saccadic suppression (antisaccade) tasks. Eye movements were scored in terms of error rates and latency. None of the groups differed in terms of their performance on the prosaccade task. Both the Per–Mag (p<0.01) and SocAnh (p<0.05) groups exceeded the controls in terms of mean antisaccade errors. The high-risk groups did not differ from each other. Eighteen of the Per–Mag individuals and 10 of the SocAnh individuals displayed deviant antisaccade performance. These findings are particularly interesting in light of suggestive evidence that antisaccade task deficits may serve as a marker of susceptibility to schizophrenia. It is hypothesized that the individuals who scored aberrantly on the Chapman scales and displayed antisaccade performance deficits are most likely to be at risk for the development of psychosis.

The purpose of this investigation is to examine the relationship between psychosis-proneness and antisaccade task performance. In the antisaccade task, subjects are presented with a visual stimulus that moves randomly to the left or right of a central fixation point. In order to perform the task correctly, the subject must inhibit a reflexive saccade and produce a saccade in the opposite direction. Electrophysiological evidence (cf. Evdokimidis et al., 1996), as well as clinical studies (cf. Guitton et al., 1985; Pierrot-Deseilligny et al., 1991; Gooding et al., 1997), suggests that antisaccade task performance is a measure of dorsolateral prefrontal cortical functioning. Schizophrenia patients (Fukushima et al., 1988 and Fukushima et al., 1990; Clementz et al., 1994; Katsanis et al., 1997) have displayed significantly poorer performance on the antisaccade task, relative to normal controls. Currently there is equivocal support for the presence of antisaccade deficits in non-schizophrenic psychiatric patients. Patients with schizophrenia produced significantly greater antisaccade errors than non-schizophrenic psychiatric comparison subjects in some investigations (cf. Fukushima et al., 1990; Clementz et al., 1994; McDowell and Clementz, 1997), while other findings (Sereno and Holzman, 1995; Tien et al., 1996; Katsanis et al., 1997) suggest that impairment in antisaccade performance is not specific to schizophrenia. Nonetheless, the presence of these performance deficits in unaffected relatives of schizophrenics (Clementz et al., 1994; Katsanis et al., 1997) support the hypothesis that the antisaccade task may be a useful measure for identifying individuals with an increased risk for schizophrenia. There are a plethora of studies indicating that schizotypes, identified on the basis of their responses to the Chapman Psychosis-Proneness Scales, perform abnormally on biobehavioral markers of risk (cf. Miller and Yee, 1994; Gooding and Iacono, 1995). Detailed descriptions of each of the Chapman Psychosis-Proneness Scales can be found elsewhere (cf. Chapman et al., 1995). Briefly, the Chapman scales are based in part on Meehl's conceptualization of schizotypy (Meehl, 1962 and Meehl, 1964; Golden and Meehl, 1979). Research on these scales suggests that in unselected populations they are relatively free of social desirability biases (Chapman et al., 1995). Most of these investigations have focused on individuals defined as at-risk using the Perceptual Aberration Scale (Chapman et al., 1978). The emphasis on the Perceptual Aberration Scale stems largely from findings that this scale identifies a subgroup of psychosis-prone individuals, some of whom eventually manifest a psychotic disorder (cf. Chapman et al., 1994). Usually, at-risk subjects identified using the Magical Ideation Scale are not assessed using psychophysiological measures. However, it is typical for individuals who score high on the Perceptual Aberration Scale to also score aberrantly high on the Magical Ideation Scale, and vice versa; the scales correlate around 0.70 (Chapman et al., 1982; Lipp et al., 1994; Chapman et al., 1994). There are several indications (cf. Mishlove and Chapman, 1985) that the revised Social Anhedonia Scale is useful as a measure of psychosis-proneness. Kwapil et al. (1997)reported that although high scorers on the Social Anhedonia Scale do not differ markedly from control subjects on cross-sectional measures of psychosis-proneness, longitudinal data suggest that these subjects are especially psychosis-prone at 10-year follow-up. More recently, Kwapil (in press)reported that 24% of high scorers on the revised Social Anhedonia Scale were diagnosed with schizophrenia-spectrum disorders at the follow-up, compared to only 1% of the control group. These findings suggest that the Social Anhedonia Scale, unlike the Perceptual Aberration Scale, may identify individuals at specific risk for the development of schizophrenia-spectrum disorders. To date, there has been only one published report of antisaccade performance in hypothetically psychosis-prone individuals. Holzman et al. (1995)examined the antisaccade task performance of 56 undergraduates who had been screened using the Perceptual Aberration Scale. Students with high scores on the Perceptual Aberration Scale (n=31) made significantly more errors than the low scoring students (n=25). It is also noted that the authors of the prior report made no mention of individuals' performance on a reflexive saccade task; it is beneficial to include such a task in order to demonstrate that the subjects were adequately motivated during their assessment. On the basis of the Holzman et al. (1995)study, subjects with high perceptual aberration scores would be expected to produce significantly more errors on the antisaccade task than controls. This study was undertaken in order to replicate and extend the Holzman et al. (1995)finding. Psychosis-prone individuals identified by their elevated scores on the revised Social Anhedonia Scale might also be expected to produce more antisaccade errors than control subjects. Elevated antisaccade error rates have been found in neurological patients with frontal lobe lesions (cf. Guitton et al., 1985; Gooding et al., 1997) and anhedonia is frequently associated with frontal lobe deficits (Stuss and Benson, 1986). In schizophrenia patients, anhedonia is associated with the `deficit' or `negative' symptoms, and some investigators have proposed that these symptoms are more likely to involve prefrontal neural circuits (Weinberger, 1987)2. The main goal of the present study was to examine the association between psychosis-proneness and antisaccade task performance. This investigation extends the research literature by examining a larger sample of at-risk subjects, including subjects identified on the basis of their scores on the revised Social Anhedonia Scale. Moreover, this investigation compares two main factors of psychosis proneness, namely, cognitive/perceptual distortion and anhedonia (Kelley and Coursey, 1992; Lipp et al., 1994) in terms of their putative association with inhibitory deficits such as that reflected by poor performance on antisaccade tasks. Examination of the association between schizotypy, as measured by psychosis-proneness scales, and antisaccade task performance may further our understanding of the phenotype of the schizophrenia spectrum.