عنوان انگلیسی
Brain asymmetry and facial attractiveness: Facial beauty is not simply in the eye of the beholder
دانلود فوری مقاله + سفارش ترجمه 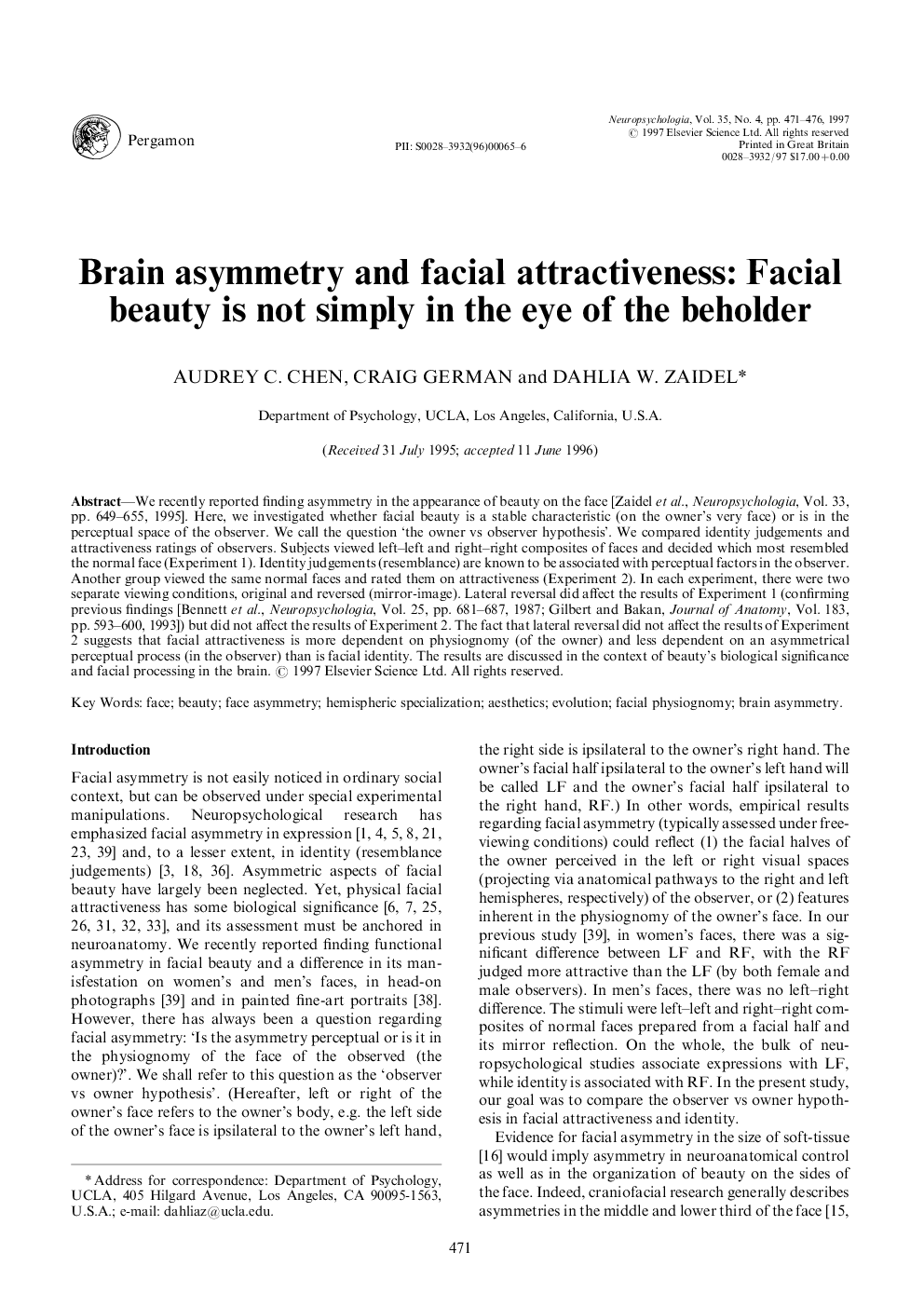 We recently reported finding asymmetry in the appearance of beauty on the face Zuidel et al., Neuropsychologia, Vol. 33, pp. 649–655, 1995. Here, we investigated whether facial beauty is a stable characteristic (on the owner's very face) or is in the perceptual space of the observer. We call the question `the owner vs observer hypothesis'. We compared identity judgements and attractiveness ratings of observers. Subjects viewed left–left and right–right composites of faces and decided which most resembled the normal face (Experiment 1). Identity judgements (resemblance) are known to be associated with perceptual factors in the observer. Another group viewed the same normal faces and rated them on attractiveness (Experiment 2). In each experiment, there were two separate viewing conditions, original and reversed (mirror-image). Lateral reversal did affect the results of Experiment 1 (confirming previous findings Bennet et al., Neuropsychologia, Vol. 25, pp. 681–687, 1987; Gilbert and Baken, Journal of Anatomy, Vol. 153, pp. 593–600, 1993.) but did not affect the results of Experiment 2. The fact that lateral reversal did not affect the results of Experiment 2 suggests that facial attractiveness is more dependent on physiognomy (of the owner) and less dependent on an asymmetrical perceptual process (in the observer) than is facial identity. The results are discussed in the context of beauty's biological significance and facial processing in the brain.

Facial asymmetry is not easily noticed in ordinary social context, but can be observed under special experimental manipulations. Neuropsychological research has emphasized facial asymmetry in expression 1, 4, 5, 8, 21, 23 and 39and, to a lesser extent, in identity (resemblance judgements) 3, 18 and 36. Asymmetric aspects of facial beauty have largely been neglected. Yet, physical facial attractiveness has some biological significance 6, 7, 25, 26, 31, 32 and 33, and its assessment must be anchored in neuroanatomy. We recently reported finding functional asymmetry in facial beauty and a difference in its manisfestation on women's and men's faces, in head-on photographs [39]and in painted fine-art portraits [38]. However, there has always been a question regarding facial asymmetry: `Is the asymmetry perceptual or is it in the physiognomy of the face of the observed (the owner)?'. We shall refer to this question as the `observer vs owner hypothesis'. (Hereafter, left or right of the owner's face refers to the owner's body, e.g. the left side of the owner's face is ipsilateral to the owner's left hand, the right side is ipsilateral to the owner's right hand. The owner's facial half ipsilateral to the owner's left hand will be called LF and the owner's facial half ipsilateral to the right hand, RF.) In other words, empirical results regarding facial asymmetry (typically assessed under free-viewing conditions) could reflect (1) the facial halves of the owner perceived in the left or right visual spaces (projecting via anatomical pathways to the right and left hemispheres, respectively) of the observer, or (2) features inherent in the physiognomy of the owner's face. In our previous study [39], in women's faces, there was a significant difference between LF and RF, with the RF judged more attractive than the LF (by both female and male observers). In men's faces, there was no left–right difference. The stimuli were left–left and right–right composites of normal faces prepared from a facial half and its mirror reflection. On the whole, the bulk of neuropsychological studies associate expressions with LF, while identity is associated with RF. In the present study, our goal was to compare the observer vs owner hypothesis in facial attractiveness and identity. Evidence for facial asymmetry in the size of soft-tissue [16]would imply asymmetry in neuroanatomical control as well as in the organization of beauty on the sides of the face. Indeed, craniofacial research generally describes asymmetries in the middle and lower third of the face 15, 16, 27 and 34. In large sets of faces, Ferrario and colleagues found that (1) in general, the lower third of RF is larger than LF, in both men and women; but (2) the lower RF itself is slightly larger in men than in women 15 and 17, while (3) the LF is essentially the same size in both sexes. They did not find any significant differences in facial shape between men and women. The sexual-dimorphism finding is in agreement with another report [29]. Taken together, the morphological evidence implies that aspects of beauty could be in the physiognomy of the owner's face. We commonly think that aesthetic judgement of facial beauty is based on subjective impressions which lack an anchor in the brain's functional neuroanatomy. However, several lines of evidence suggest otherwise. (1) There is cross-cultural agreement on facial attractiveness. Faces judged very attractive in their own society are judged to be equally attractive in other societies 10 and 28. (2) People with attractive faces receive more positive reactions than those with unattractive faces 30 and 33. People with attractive faces are given a variety of positive attributes purely on the basis of the appearance of facial beauty [13]. (3) In evolutionary biology, the significance of the display of beauty on the face lies in its potential to reveal features that are critical for successful reproduction and survival of the offspring. Mate attraction habits by diverse non-human species rely on external features (e.g. feathers, antlers, fur) to reveal clues related to health, quality of genes, state of immune system, and similar factors 9, 25, 26 and 32. (4) Buss 6 and 7found that, in 37 cultures, attractiveness was a primary consideration in mate selection by men. In humans, it is reasonable to assume that biologically-relevant characteristics, revealed in facial attractiveness, are interpreted in the observer's brain, a functionally asymmetric brain, even without his or her conscious awareness of their parameters or knowledge of their specific features. When testing the observer vs owner hypothesis, a good tool for determining invariance in facial physiognomy is lateral reversal (mirror-image) of faces. This strategy has been applied profitably in several studies using facial or pictorial stimuli 18, 23, 24 and 38. In reversal, content is constant, but lateral layout is changed. If reversal does not affect subjects' responses, then the responses must reflect features inherent in the physiognomy. Similarly, when assessing facial asymmetries, a good experimental tool is faces created from combining one half of the face with its reflection [36]. Since left–left and right–right composites appear like regular faces, they accentuate the asymmetrical features of each side. In the two experiments described below, we used the same faces but asked different questions.