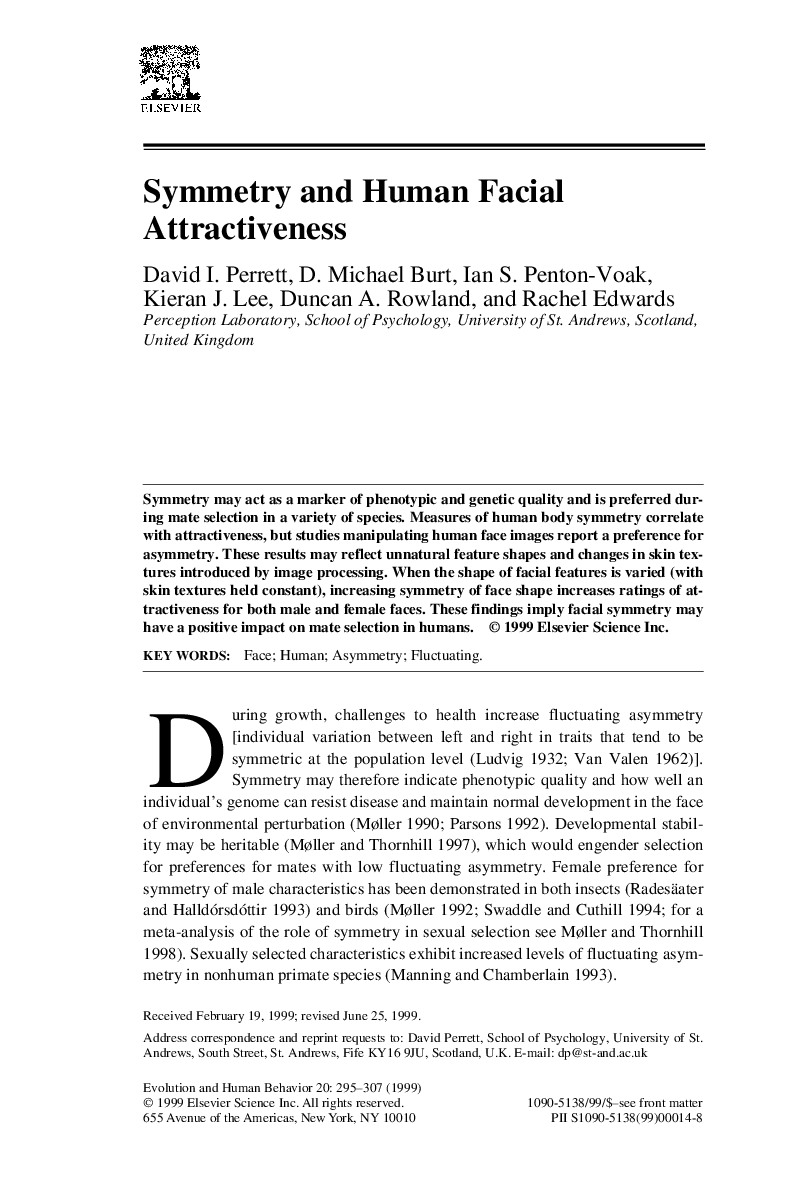 Symmetry may act as a marker of phenotypic and genetic quality and is preferred during mate selection in a variety of species. Measures of human body symmetry correlate with attractiveness, but studies manipulating human face images report a preference for asymmetry. These results may reflect unnatural feature shapes and changes in skin textures introduced by image processing. When the shape of facial features is varied (with skin textures held constant), increasing symmetry of face shape increases ratings of attractiveness for both male and female faces. These findings imply facial symmetry may have a positive impact on mate selection in humans.

D uring growth, challenges to health increase fluctuating asymmetry [individual variation between left and right in traits that tend to be symmetric at the population level Ludvig 1932 and Van Valen 1962]. Symmetry may therefore indicate phenotypic quality and how well an individual's genome can resist disease and maintain normal development in the face of environmental perturbation Møller 1990 and Parsons 1992. Developmental stability may be heritable (Møller and Thornhill 1997), which would engender selection for preferences for mates with low fluctuating asymmetry. Female preference for symmetry of male characteristics has been demonstrated in both insects (Radesäater and Halldórsdóttir 1993) and birds (Møller 1992 and Swaddle and Cuthill 1994; for a meta-analysis of the role of symmetry in sexual selection see Møller and Thornhill 1998). Sexually selected characteristics exhibit increased levels of fluctuating asymmetry in nonhuman primate species (Manning and Chamberlain 1993). Symmetry also appears to be associated with sexual selection and reproductive success of humans Gangestad and Thornhill 1997, Møller et al. 1995, Singh 1995 and Thornhill et al. 1995. Measures of symmetry in the human body and face correlate with attractiveness Gangestad et al. 1994, Grammer and Thornhill 1994 and Mealey and Bridgstock 1999. Such correlations may, however, be due to other factors covarying with symmetry. For example, sex hormones may influence the symmetry of growth (Thornhill and Gangestad 1993) and chin shape, which independently affects attractiveness (Perrett et al. 1994). Given that mate selection in animals including humans appears to be influenced by symmetry, it is surprising that most studies directly manipulating human facial images have found that asymmetry is generally preferred to symmetry Kowner 1996, Langlois et al. 1994, Samuels et al. 1994 and Swaddle and Cuthill 1995. Most of these studies have created symmetric face images by aligning one half face with its mirror reflection Kowner 1996, Langlois et al. 1994 and Samuels et al. 1994(Figure 1c–d). These techniques may induce additional stimulus differences unrelated to symmetry. The mirror reflecting technique can introduce abnormal feature shapes. For example, a mouth of normal width displaced to the right of the midline (Figure 1a) will assume atypical widths in left mirrored (Figure 1c) and right mirrored (Figure 1d) chimeric face images. Asymmetry may have been preferred in a further study (Swaddle and Cuthill 1995) because asymmetric original faces were compared to symmetric images with different skin textures (induced by combining original and mirror images). Whereas averaging textures over a large number of faces results in an even skin texture, combining a face with its mirror image may actually increase the number of apparent blemishes. For example, a face with a dark spot on the left cheek combined with its mirror image would generate a face with two slightly paler symmetric spots on the left and right cheeks. Full-size image (94 K) Figure 1. Symmetry manipulation for facial images with natural skin textures. Real face images with normal and symmetric shapes. (a, b) Examples of stimuli used in Experiment 1. Note that asymmetries in pigmentation and shadows present in the original faces (a) remain in the more symmetrically shaped versions (b). (c, d) Images made with techniques employed in previous studies of facial symmetry. (c) Chimeric faces made by combining the left sides of the original faces with their mirror reflections (c) and similarly for the right sides of the faces (d) illustrate the shape abnormalities that this technique induces Figure options Alternatively, humans, unlike many other animals, may prefer some degree of asymmetry in faces because this makes them look more distinctive or expressive. In humans there are tendencies for directional asymmetries (consistent differences between left and right sides of the body) that occur throughout the population. The most prominent directional asymmetries are, however, transient in nature and occur during speech and emotional expressions. During speech, most people (76%) make movements of greater amplitude on the right side of their mouth (the left side on an image, Graves et al. 1982, Graves and Landis 1990 and Wolf and Goodale 1987). These asymmetries are probably related to the greater strength of contralateral neural connections between the left (linguistic implicated) hemisphere and the right side of the face. During emotional expression, the left side of the face appears more expressive than the right (Skinner and Mullen 1991). Most researchers Borod et al. 1981, Borod and Koff 1983 and Wylie and Goodale 1988 have found that spontaneous expressions are more asymmetric than posed expressions though the findings are debated (Skinner and Mullen 1991). These naturally occurring asymmetries could contribute to attractiveness and may explain the preferences that have been reported for asymmetric human faces.