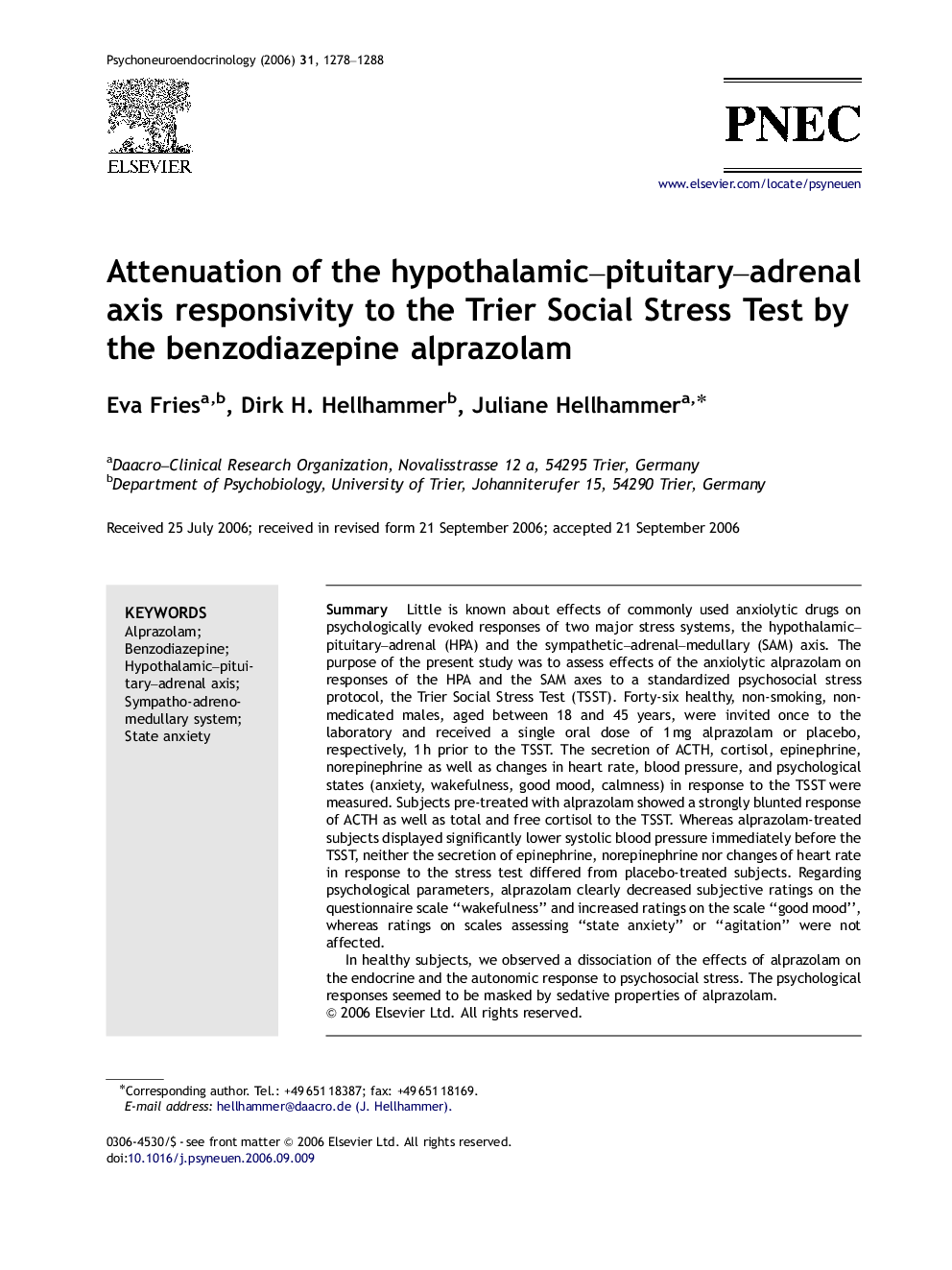 Little is known about effects of commonly used anxiolytic drugs on psychologically evoked responses of two major stress systems, the hypothalamic–pituitary–adrenal (HPA) and the sympathetic–adrenal–medullary (SAM) axis. The purpose of the present study was to assess effects of the anxiolytic alprazolam on responses of the HPA and the SAM axes to a standardized psychosocial stress protocol, the Trier Social Stress Test (TSST). Forty-six healthy, non-smoking, non-medicated males, aged between 18 and 45 years, were invited once to the laboratory and received a single oral dose of 1 mg alprazolam or placebo, respectively, 1 h prior to the TSST. The secretion of ACTH, cortisol, epinephrine, norepinephrine as well as changes in heart rate, blood pressure, and psychological states (anxiety, wakefulness, good mood, calmness) in response to the TSST were measured. Subjects pre-treated with alprazolam showed a strongly blunted response of ACTH as well as total and free cortisol to the TSST. Whereas alprazolam-treated subjects displayed significantly lower systolic blood pressure immediately before the TSST, neither the secretion of epinephrine, norepinephrine nor changes of heart rate in response to the stress test differed from placebo-treated subjects. Regarding psychological parameters, alprazolam clearly decreased subjective ratings on the questionnaire scale “wakefulness” and increased ratings on the scale “good mood”, whereas ratings on scales assessing “state anxiety” or “agitation” were not affected. In healthy subjects, we observed a dissociation of the effects of alprazolam on the endocrine and the autonomic response to psychosocial stress. The psychological responses seemed to be masked by sedative properties of alprazolam.

Anxiety is an aversive emotional state with the apprehensive anticipation of indefinite threat or danger (Öhman, 2000). It particularly arises when an individual is involved in a situation which is subjectively relevant and anticipated as threatening, ambiguous, uncontrollable, unpredictable and novel (Huppmann and Hellhammer, 1978). Aside the rise in anxiety, the organism responds with an activation of two major stress systems, the hypothalamic–pituitary–adrenal (HPA) and the sympathetic–adrenal–medullary (SAM) axis. In humans, only a few studies explored the effects of anxiolytic drugs on the endocrine, autonomic and psychological response to anxiogenic psychological challenges under laboratory conditions. Effects of the benzodiazepine alprazolam, for example, have been studied under naloxone challenge (Torpy et al., 1993), insulin-induced hypoglycemia (Breier et al., 1992), cholecystokinin-tetrapeptide stimulation (Zwanzger et al., 2003), and after challenge with corticotropin-releasing hormone (Rohrer et al., 1994). However, to our knowledge, only two studies investigated the acute effects of single oral intake of alprazolam under psychological stress: Benschop and colleagues (1996) tested healthy males during their first-time tandem parachute jump, while Rohrer et al. (1994) used a stressful speech in front of a video camera as a stressor. For the effects of alprazolam under psychological stress, inconsistent results were observed. Whereas alprazolam attenuated the secretion of cortisol and epinephrine in response to the parachute-jump, the secretion of norepinephrine or changes of heart rate were not affected by intake of the benzodiazepine (Benschop et al., 1996). In the free speech paradigm, administration of alprazolam attenuated the increase in blood pressure as well as the secretion of adrenocorticotropic hormone (ACTH) and cortisol, but not the increase in heart rate (Rohrer et al., 1994). The goal of the present study was to assess the effects of 1 mg alprazolam, a medium dose used in clinical practice (maximum 4 mg per day), on the endocrine, autonomic and psychological stress response in a valid and highly standardized laboratory protocol, the Trier Social Stress Test (TSST), which has been developed by our laboratory (Kirschbaum et al., 1993). This protocol is characterized by the situational characteristics of novelty, unpredictability, uncertainty, ego-involvement, and anticipatory anxiety. Beside a rise in perceived anxiety, the TSST induces an increase in ACTH, both total and free cortisol, epinephrine, norepinephrine, blood pressure and heart rate (e.g. Kirschbaum et al., 1993; Schommer et al., 2003). The TSST has been applied in numerous studies (Kudielka et al., 2007a and Kudielka et al., 2007b) and, in a recent metaanalysis, has been approved a very reliable laboratory stress protocol (see Dickerson and Kemeny, 2004). Since the TSST addresses some key elements of social anxiety disorders, we hypothesized that clinically effective anxiolytic drugs like alprazolam dampen the TSST-induced activation of the HPA axis and the SAM system as indicated by a less pronounced increase of ACTH, cortisol, epinephrine, norepinephrine, heart rate and blood pressure. We further assumed that the benzodiazepine dampens the psychological response to the TSST.