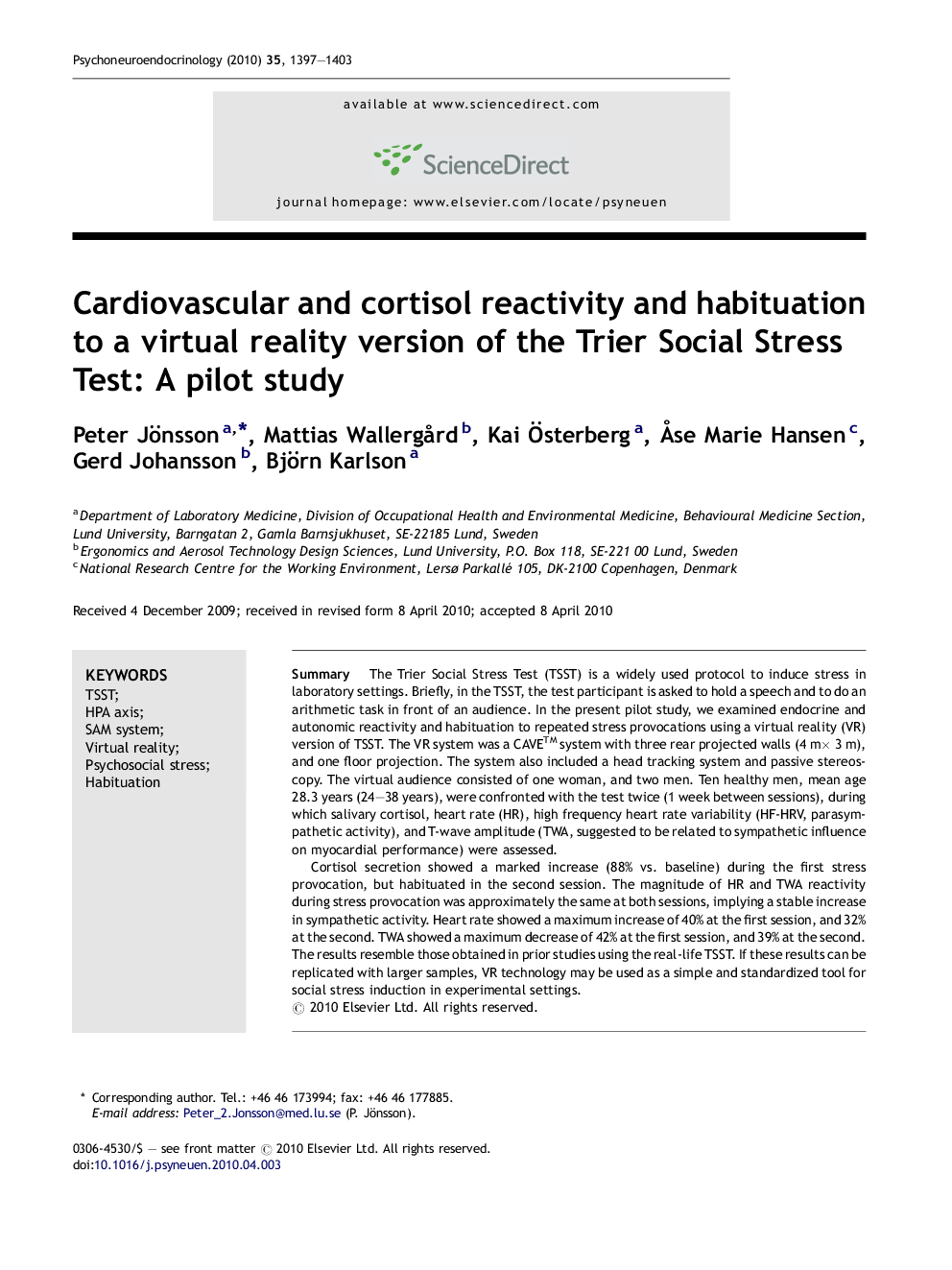 The Trier Social Stress Test (TSST) is a widely used protocol to induce stress in laboratory settings. Briefly, in the TSST, the test participant is asked to hold a speech and to do an arithmetic task in front of an audience. In the present pilot study, we examined endocrine and autonomic reactivity and habituation to repeated stress provocations using a virtual reality (VR) version of TSST. The VR system was a CAVE™ system with three rear projected walls (4 m× 3 m), and one floor projection. The system also included a head tracking system and passive stereoscopy. The virtual audience consisted of one woman, and two men. Ten healthy men, mean age 28.3 years (24–38 years), were confronted with the test twice (1 week between sessions), during which salivary cortisol, heart rate (HR), high frequency heart rate variability (HF-HRV, parasympathetic activity), and T-wave amplitude (TWA, suggested to be related to sympathetic influence on myocardial performance) were assessed. Cortisol secretion showed a marked increase (88% vs. baseline) during the first stress provocation, but habituated in the second session. The magnitude of HR and TWA reactivity during stress provocation was approximately the same at both sessions, implying a stable increase in sympathetic activity. Heart rate showed a maximum increase of 40% at the first session, and 32% at the second. TWA showed a maximum decrease of 42% at the first session, and 39% at the second. The results resemble those obtained in prior studies using the real-life TSST. If these results can be replicated with larger samples, VR technology may be used as a simple and standardized tool for social stress induction in experimental settings.

The Trier Social Stress Test (TSST) is a widely used protocol to induce psychosocial stress in laboratory setting (Kirschbaum et al., 1993). Briefly, the participant is asked to deliver a speech and to perform an arithmetic task in front of an evaluating audience. The audience, consisting of three trained actors, does not respond emotionally during the test, but maintains a neutral facial expression, which makes the situation very stressful for the participant. These two tasks, as well as anticipation during preparation of the speech, consistently evoke subjective stress and activation of the hypothalamus–pituitary–adrenal (HPA) axis and the sympatho–adrenal–medullary (SAM) system (Schommer et al., 2003, Kudielka et al., 2004, Kudielka et al., 2006, Zgraggen et al., 2005, Nater et al., 2006 and Kelly et al., 2008). The standardized protocol of TSST increases the validity of comparisons of results between studies and across laboratories. Still, the laboratory environments, settings and audience vary. Although the audience consists of actors, it may be difficult to hold the acting constant across all sessions. By using virtual reality (VR) technology, with virtual environments and persons, it should be possible to hold these variables even more constant. Furthermore, replacing actors with virtual persons reduces the practical problems and costs associated with hiring professional actors. The present study was conducted to evaluate a recently developed VR version of TSST. Prior studies have shown that it is possible to evoke subjective social stress or anxiety in virtual environments using virtual audiences during public speaking tasks (Pertaub et al., 2002 and Slater et al., 2006). For example, during a public speaking task, people respond with greater anxiety to a hostile virtual audience than to a neutral or friendly virtual audience (Pertaub et al., 2002). It has also been shown that stress provocation in virtual environments results in stress-related endocrine and autonomic reactivity, although with a variety of success. In a study by Kelly et al. (2007), endocrine reactivity was examined in response to TSST with a real audience and to TSST with a virtual audience. Cortisol levels increased during stress provocation in both conditions, but were much more accentuated in response to the real audience (that is, 30% increase to the virtual audience, and 90% to the real audience). More recently, blood pressure, heart rate, adrenalin, and noradrenalin were shown to increase during a speech in front of a virtual audience. Surprisingly, no significant cortisol elevation was found in response to this task (Kotlyar et al., 2008). The VR studies described above have all utilized head-mounted displays to present the virtual environment. Most such systems suffer from limited resolution and field-of-view and are therefore not able to present a virtual environment to the user in a very realistic manner. In the present paper, we intended to replicate the TSST in a virtual environment using a fully immersive, projector-based VR system, a so-called CAVE™ (see below). The TSST includes two components that are hypothesized to be crucial to induce stress in experimental settings, that is, a social-evaluative context combined with uncontrollable outcomes (Dickerson and Kemeny, 2004). In two studies, part of this hypothesis was tested. Gruenewald et al. (2004) let one group of participants complete the standard TSST and another group deliver the speech alone in an empty room. They found that the group performing in front of an audience showed a significant cortisol response, whereas the group performing alone did not, suggesting that social evaluation by others is a critical component in eliciting a stress response. However, a recent study using a similar design let one group deliver a speech in front of a committee and another group deliver a speech alone in front a one-way mirror that was hiding a committee. Both conditions permitted verbal communication between the participant and the audience. The results showed that there was no significant difference in cortisol reactivity between two groups; both conditions showed the same amount of cortisol reactivity. The authors concluded that visual presence of a panel is not a necessary condition to exert social evaluation, and that confirming the presence of a panel by verbal communication is sufficient to elicit a significant stress response (Andrews et al., 2007). Hence, to increase the element of social evaluation, or presence, we included the possibility of two-way communication between the test participants and the audience in the VR version of TSST. TSST is often used to examine cortisol response changes over time. A hallmark of the HPA axis stress response is that it generally habituates quickly to repeated exposures to the same stressful stimulus. It has been demonstrated that the cortisol response, as a measure of HPA axis reactivity, to repeated TSST provocations gradually decreases most notably during the second session (Pruessner et al., 1997 and Schommer et al., 2003). Regarding autonomic reactivity to repeated TSST, prior studies report on small decreases over time (Schommer et al., 2003), or no habituation at all (Gerra et al., 2001 and von Känel et al., 2006). To our knowledge, no studies to date have examined habituation of the stress response in a virtual environment. Consequently, in the present study, TSST was presented twice on 2 different days to examine the effects of habituation. Autonomic reactivity was assessed by heart rate, T-wave amplitude (TWA) as a measure of sympathetic cardiac control (Rau, 1991 and Kline et al., 1998), and high frequency heart rate variability (HF-HRV) as a measure of vagal cardiac control (Berntson et al., 1997). Saliva cortisol was collected to assess HPA axis reactivity. Thus, the objectives of the present study were to (a) assess whether TSST in a virtual environment using a fully immersive CAVE™ system would induce a stress response comparable to previous studies using the real-life TSST, and, if so, (b) whether this stress response would habituate to repeated provocations in a fashion similar to findings from studies using real-life TSST.