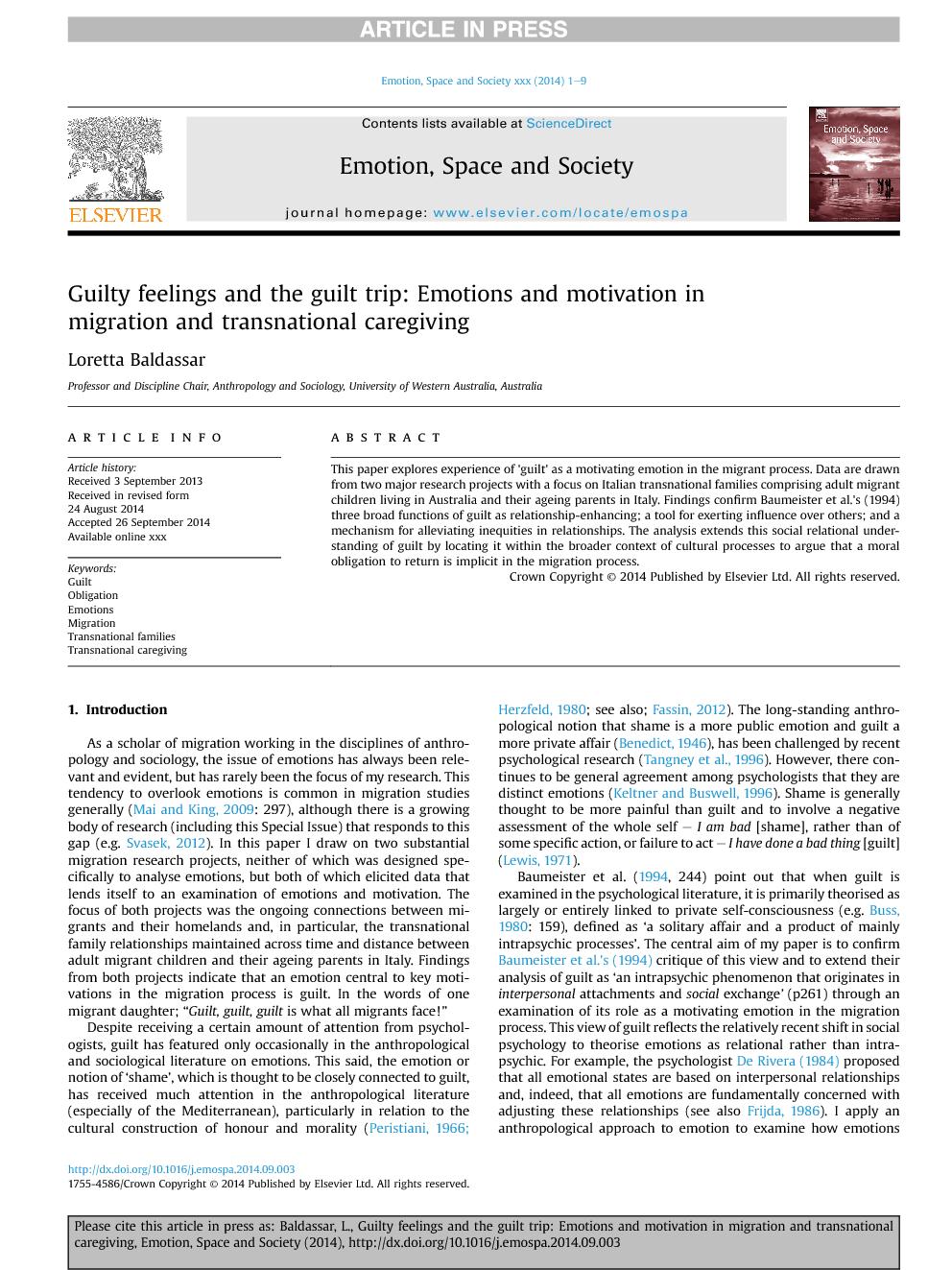 This paper explores experience of 'guilt' as a motivating emotion in the migrant process. Data are drawn from two major research projects with a focus on Italian transnational families comprising adult migrant children living in Australia and their ageing parents in Italy. Findings confirm Baumeister et al.'s (1994) three broad functions of guilt as relationship-enhancing; a tool for exerting influence over others; and a mechanism for alleviating inequities in relationships. The analysis extends this social relational understanding of guilt by locating it within the broader context of cultural processes to argue that a moral obligation to return is implicit in the migration process.

While the term ‘shame’ was rarely mentioned by people in the two migration research projects I draw on for this paper, the term, idea of and feelings about ‘guilt’ were very common. Sociologist Elspeth Probyn (2005) has explored shame as a positive force in society. While my research findings tend to question her assessment that guilt is ‘easier to get rid of [than shame] and once dealt with is forgotten’ (a question which warrants further research), I am inspired by her work, as well as Baumeister et al.'s (1994) to consider the potential positive social aspects of guilt and its capacity for relationship building, in particular as a motivating emotion in sustaining family networks and kinship relationships over distance and time. My findings indicate that a characteristic feature of ‘feeling guilty’, particularly for the women in my studies, is precisely that it is a ubiquitous and ever-present feeling of not having adequately met kinship obligations to care. While guilt was often described by migrants as a feeling that ‘is always there’ and that they could ‘never really get rid of’, this constant ‘guilty feeling’ can arguably be defined as a mostly positive motivating force in maintaining and sustaining relationships over time and distance. In other words, to feel guilty, although it is not a pleasant emotion, is one way of expressing appropriate levels of care and concern, and is therefore in itself a confirmation of appropriate behaviour or of being a ‘good’ or ‘attentive’ child/grandparent. This argument is not intended to debunk conceptualisations of guilt as a negative and damaging emotion, but instead to acknowledge guilt as also a potentially positive and constructive social response. By attending to the cultural specificities of both the processes of migration and of family relationships, this paper demonstrates how migrants and their homeland kin sustain transnational emotional fields that develop out of histories of previous co-present negotiated relationships, culturally informed notions of obligation in which feeling guilty and guilt trips are performed as a kind of emotional grammar that constitutes and reaffirms these relations. In many ways guilt is performed and functions much like the emotion of iliw described by McKay (2007) among Ifugo Filipinos. 5 The Italian migrants and their homeland kin in my studies appear to mediate their connections across transnational social fields, ‘showing’ and ‘sharing feeling’ through the performance of guilt. McKay (2007) argues that, ‘Within this new emotional field, we find new and distinctive forms of agency and subjectivity produced through long-distance emotional connections.’ The relevance of new technologies and their role in transnational family communication is pertinent here. In previous work, I have argued that access to new communication technologies increases not only the desire for regular transnational family contact, but also the obligation to be in touch ( Baldassar, 2011b and Baldassar et al., 2007: 223). In other words, the capacity to be in touch when and as often as one chooses eliminates any acceptable excuse not to be in frequent contact and therefore, failure to be in touch can be judged as poor caregiving or poor kin behaviour. In contemporary transnational relationships with high access to technologies of communication, the choice and use of media is itself ‘a major communicative act’ ( Madianou and Miller, 2012, 139) providing potential new sources of guilt-induced motivation. The process of migration, which by definition is characterised by the separation of family and loved ones, offers fertile ground for the exploration of the sociality of emotions as they relate to ties of kinship, obligation and reciprocity. In the case of the migrant transnational families examined in this paper, guilt appears to be a commonly expressed emotion triggered by absence and separation. However, despite the impediments of distance, caregiving can take place transnationally, particularly if we recognise the central role and importance of the gift of self. In migration processes, the caregiving exchanges of the gift of self are motivated by a set of obligations implicit in cultural understandings of gender roles and of the migration project itself. A sense of obligation to care is defined by shared cultural understandings embedded in particularistic kin relationships. Notions of obligation are differentiated and divergent as they are experienced by, and apply differently to, various family members depending on gender, age and the negotiation of family relationships over time. Guilty feelings and guilt trips are mapped out onto these relationships in response to these deeply relational but potentially divergent understanding and expectations of caregiving obligation. Central to Italian conceptions of the labour migration experiences presented in this paper is the moral obligation to return. Similarly, for the skilled/lifestyle Italian migrants discussed here, the separation that characterises migration sets up a moral obligation to remain in touch and to facilitate co-presence. Failing to meet these obligations results in feelings of guilt that serve to motivate the activity and practice of transnational communication. The expression of guilt is also a culturally appropriate response that is a social statement of care. In this way, guilt can be defined, not only as a type of interpersonal sensitivity, but also as an expression of cultural processes.