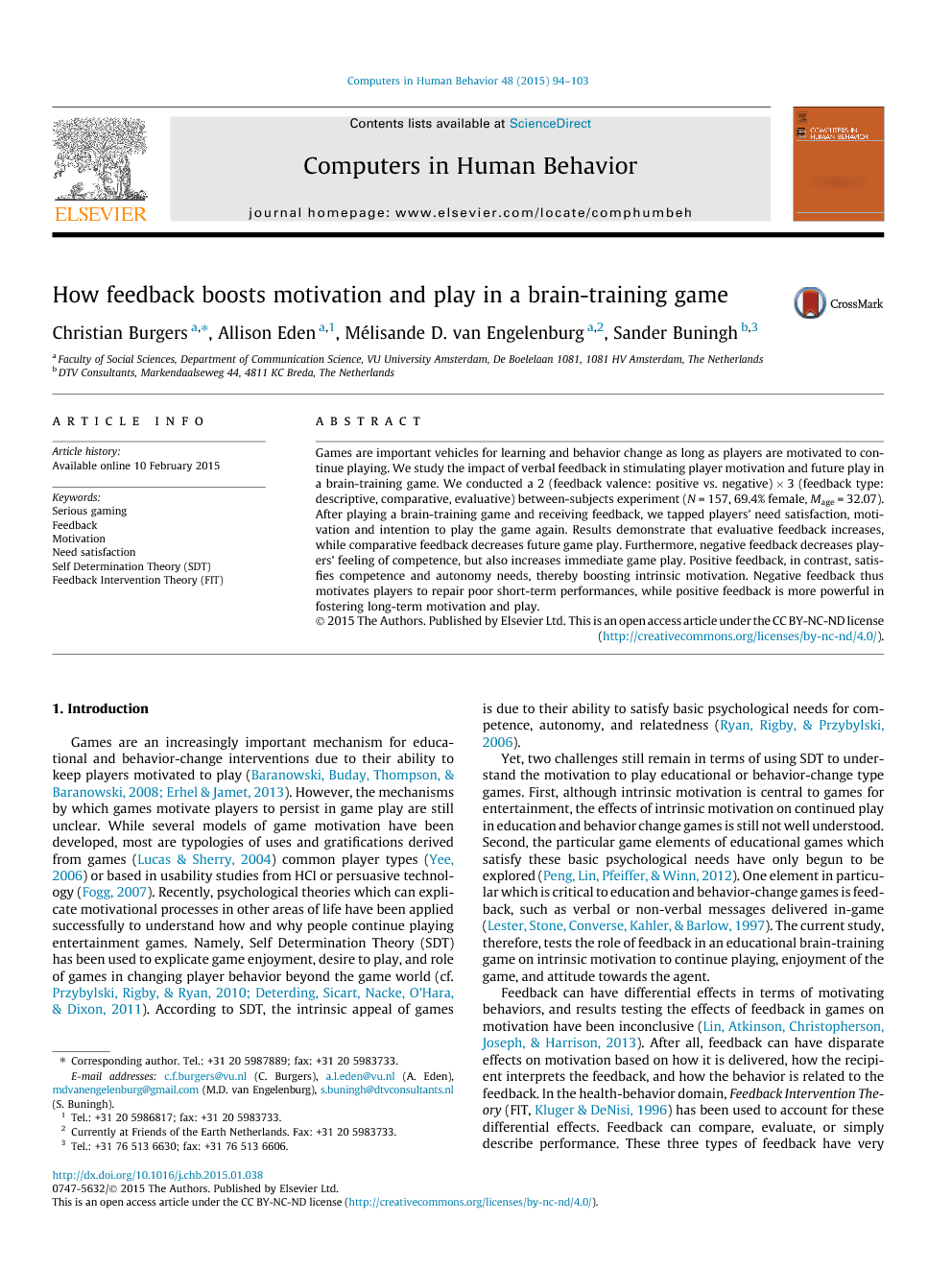 Games are an increasingly important mechanism for educational and behavior-change interventions due to their ability to keep players motivated to play (Baranowski et al., 2008 and Erhel and Jamet, 2013). However, the mechanisms by which games motivate players to persist in game play are still unclear. While several models of game motivation have been developed, most are typologies of uses and gratifications derived from games (Lucas & Sherry, 2004) common player types (Yee, 2006) or based in usability studies from HCI or persuasive technology (Fogg, 2007). Recently, psychological theories which can explicate motivational processes in other areas of life have been applied successfully to understand how and why people continue playing entertainment games. Namely, Self Determination Theory (SDT) has been used to explicate game enjoyment, desire to play, and role of games in changing player behavior beyond the game world (cf. Przybylski et al., 2010 and Deterding et al., 2011). According to SDT, the intrinsic appeal of games is due to their ability to satisfy basic psychological needs for competence, autonomy, and relatedness (Ryan, Rigby, & Przybylski, 2006). Yet, two challenges still remain in terms of using SDT to understand the motivation to play educational or behavior-change type games. First, although intrinsic motivation is central to games for entertainment, the effects of intrinsic motivation on continued play in education and behavior change games is still not well understood. Second, the particular game elements of educational games which satisfy these basic psychological needs have only begun to be explored (Peng, Lin, Pfeiffer, & Winn, 2012). One element in particular which is critical to education and behavior-change games is feedback, such as verbal or non-verbal messages delivered in-game (Lester, Stone, Converse, Kahler, & Barlow, 1997). The current study, therefore, tests the role of feedback in an educational brain-training game on intrinsic motivation to continue playing, enjoyment of the game, and attitude towards the agent. Feedback can have differential effects in terms of motivating behaviors, and results testing the effects of feedback in games on motivation have been inconclusive (Lin, Atkinson, Christopherson, Joseph, & Harrison, 2013). After all, feedback can have disparate effects on motivation based on how it is delivered, how the recipient interprets the feedback, and how the behavior is related to the feedback. In the health-behavior domain, Feedback Intervention Theory (FIT, Kluger & DeNisi, 1996) has been used to account for these differential effects. Feedback can compare, evaluate, or simply describe performance. These three types of feedback have very distinct effects on performance and motivation for health behaviors (cf. Hawkins, Kreuter, Resnicow, Fishbein, & Dijkstra, 2008). To the best of our knowledge, these questions have not yet been explored in the context of educational games. The current study thus extends the literature on educational and behavior-change games in three ways: by (1) using FIT to understand specific effects of different types of feedback on persistence and motivation within a game environment, (2) by examining the role of FIT in terms of satisfying basic psychological needs in games and (3) by further unraveling the relationship between basic game and motivational processes.

Our study shows the potential of extending the motivational framework of games as understood via CET (Deci & Ryan, 2000) by including the relevance of feedback (FIT; Kluger & DeNisi, 1996). We found that both negative and positive feedback can positively enhance willingness to engage in continued play of serious games. Players receiving negative feedback feel less competent and want to immediately repair their performance. This indicates that negative feedback may, counter-intuitively, be good in stimulating short-term and immediate gaming behavior. Gamers receiving positive feedback, on the other hand, felt more competent and autonomous and desirous of playing the future. This suggests that positive feedback may be good in sustaining long-term play. Studying the impact of theoretically relevant game elements such as feedback thus demonstrates the potential strengths and weakness of including these types of elements in serious games and gamified applications. Future research will do well to examine these elements and their subsequent effects in large field studies of player behavior outside the lab, in order to best understand how to motivate players of behavior-change games.