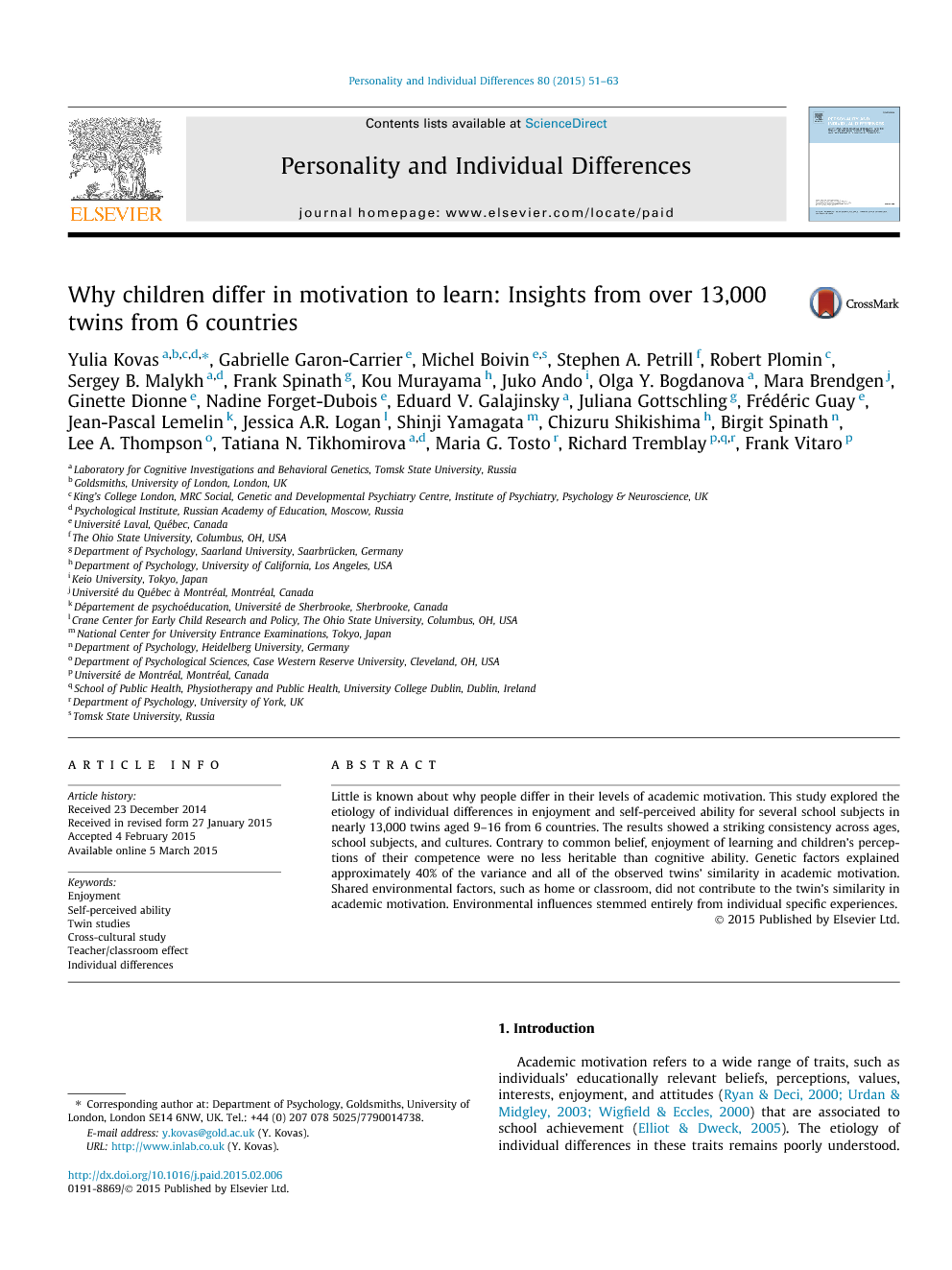 Little is known about why people differ in their levels of academic motivation. This study explored the etiology of individual differences in enjoyment and self-perceived ability for several school subjects in nearly 13,000 twins aged 9–16 from 6 countries. The results showed a striking consistency across ages, school subjects, and cultures. Contrary to common belief, enjoyment of learning and children’s perceptions of their competence were no less heritable than cognitive ability. Genetic factors explained approximately 40% of the variance and all of the observed twins’ similarity in academic motivation. Shared environmental factors, such as home or classroom, did not contribute to the twin’s similarity in academic motivation. Environmental influences stemmed entirely from individual specific experiences.

Academic motivation refers to a wide range of traits, such as individuals’ educationally relevant beliefs, perceptions, values, interests, enjoyment, and attitudes (Ryan and Deci, 2000, Urdan and Midgley, 2003 and Wigfield and Eccles, 2000) that are associated to school achievement (Elliot & Dweck, 2005). The etiology of individual differences in these traits remains poorly understood. In this paper, we focused on two important motivational constructs: enjoyment of learning (e.g., interest, liking), usually referred to intrinsic motivation; and self-perceived ability, also known as academic self-concept (e.g., children’s perception of how good they are at school subjects). Several recent studies found self-perceived ability to be substantially heritable (Spinath, Spinath, & Plomin, 2008), even when controlling for general cognitive ability (Greven et al., 2009 and Luo et al., 2011). In terms of environmental contributions, up to 60% of the variance in enjoyment and self-perceived ability is explained by non-shared experiences (Spinath et al., 2008). Despite the absence of significant shared environmental effects shown by recent large twin studies, several educational studies found a link between aspects of academic motivation and family/classroom-wide factors, such as classroom climate, peer influence, and mothers’ motivational practices in child’s education (Church et al., 2001, Gottfried et al., 1994 and Marsh et al., 2008; Ryan, 2000). One possible explanation for this inconsistency is that environmental influences may be correlated with genetic effects (Plomin, DeFries, Knopik, & Neiderhiser, 2012). For example, parental involvement in child’s education may have a causal effect on motivation or/and reflect partly genetically driven parental levels of education, ability, and motivation. Some observed classroom effects might also stem from intake selection (e.g., ability streaming). Most research into the relevant home environmental influences examines only one child per family, which makes it difficult to establish whether the environmental effects operate in a family-wide or child-specific manner. It is possible that even objectively shared experiences, such as availability of educational resources at home, act as child-specific experiences through gene-environment correlation, a mechanism through which children in the same home modify their shared environment into individual experiences. The role of teachers in shaping children’s academic motivation has been extensively studied (Chirkov and Ryan, 2001, Church et al., 2001, Reeve and Jang, 2006 and Urdan and Midgley, 2003). Research suggested that teachers can promote the development of intrinsic motivation (e.g., enjoyment, liking) by encouraging students’ autonomy, providing feedback and optimal challenges, and adopting a caring attitude towards students (Chirkov and Ryan, 2001 and Ryan and Deci, 2000). However, teacher effects cannot be easily disentangled from other potential effects of classroom resources, number of children in the class, and teacher unfacilitated classroom-peer interactions (Olson, Keenan, Byrne, & Samuelsson, 2014). Such teacher/classroom effects vary across development, with potentially stronger or persistent effects at the early stages of the formal education when children are facing systematic instruction and academic feedback for the first time (Church et al., 2001, Kovas et al., 2007, Reeve and Jang, 2006 and Urdan and Midgley, 2003). If teachers/classrooms have a strong average effect on children’s liking a particular school subject, we should expect twins in different classes to be on average less similar in their enjoyment of the subject than those in same classes. Findings on academic achievement are mixed: several studies have found small teacher/classroom influences (Byrne et al., 2010 and Nye et al., 2004), whereas other studies did not find any (Kovas et al., 2007), with a recent review suggesting that classroom performance differences should not be viewed as indicators of teacher quality (Olson et al., 2014). It could be that teachers and classrooms have a non-shared, child-specific influence, possibly interacting with children’s genetic and unique environmental background - leading to unique perceptions and reactions in different children. The goal of this study was to investigate the relative contribution of genetic and environmental factors to individual differences in enjoyment and self-perceived ability as a function of cultural and educational settings. Twins between 9 and 16 years of age from six different countries were evaluated on their enjoyment of learning and the perception of their competence in several academic disciplines. We also compared twin similarity in same versus different classrooms to evaluate teacher/classroom effects. Finally, we tested whether the first formal teacher/classroom affects later class-wide level of enjoyment and self-perceived ability (Church et al., 2001, Kovas et al., 2007, Reeve and Jang, 2006 and Urdan and Midgley, 2003).

Considering the striking consistency of these results across different aspects of academic motivation, different subjects, different ages, and different cultures, we believe that it is time to move away from solely environmental explanations, such as “good” or “bad” home, teacher, and school, for differences in enjoyment and self-perceived ability (Olson et al., 2014). The results convincingly show that, contrary to common belief, enjoyment of learning and children’s perceptions of their competence are no less heritable than cognitive ability (Greven et al., 2009). Surprisingly, unlike cognitive ability, for which shared environment makes a small to moderate contribution across the school years (Petrill et al., 2004), no such contribution was found for these motivational constructs. It remains unclear to what extent the genetic and non-shared environmental factors contributing to variation in enjoyment and self-perceived ability also contribute to variation in achievement and intelligence (Gottfried et al., 1994). Academic motivation is not independent of achievement, as it develops partly through feedback on performance and in turn may influence achievement (Guay et al., 2003). For example, some studies found bidirectional effects between motivation and performance (Luo et al., 2011). This and other genetically sensitive studies call for caution when developing interventions aimed at raising academic motivation before more is known about specific mechanisms underlying its variation (Olson et al., 2014). Current educational policies are based on average effects and are designed to operate at the family-wide and class-wide levels. However, the present research suggests that many true effects may be masked within any class or home, and that individual-specific educational approaches are required.