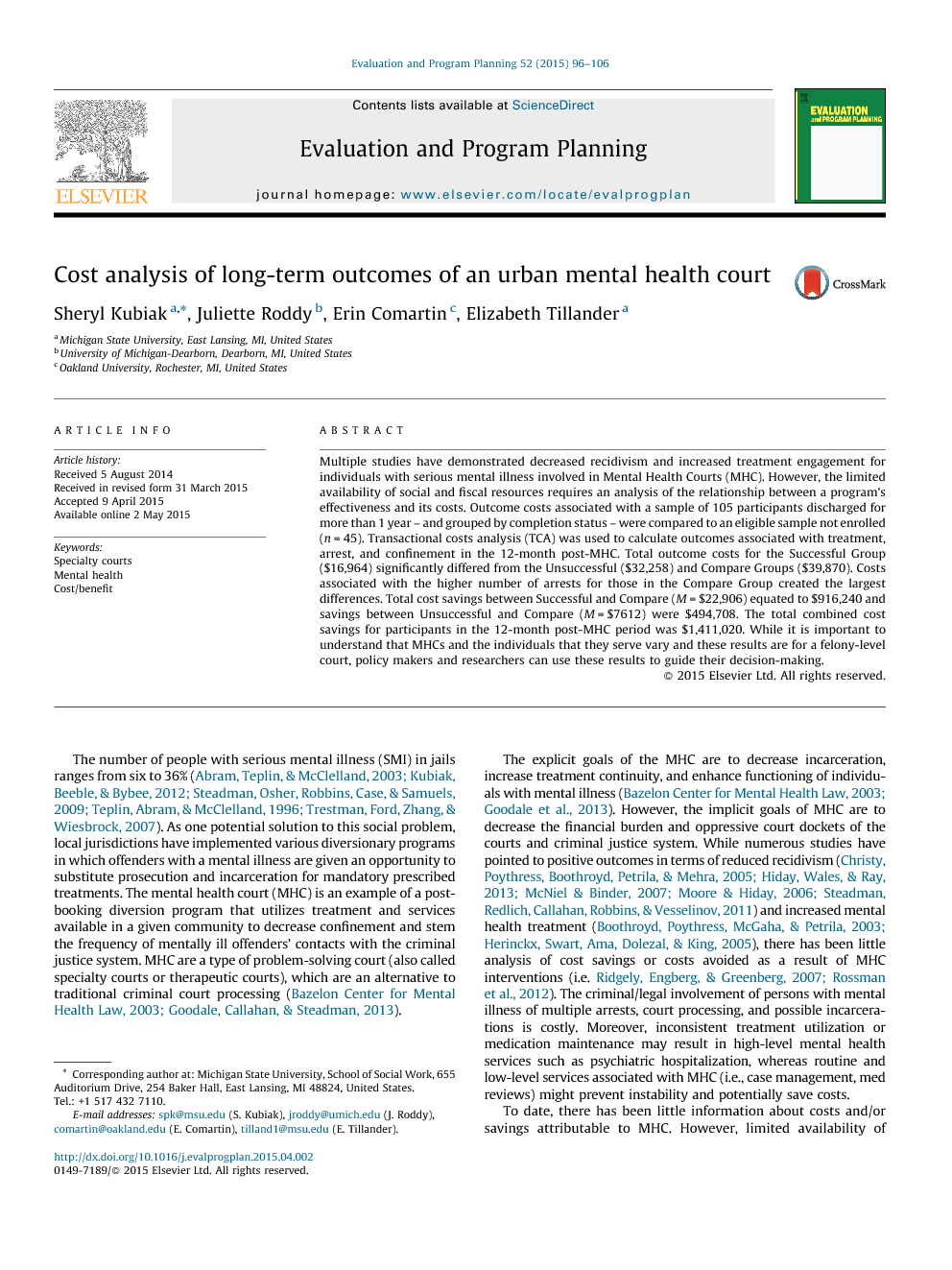 Multiple studies have demonstrated decreased recidivism and increased treatment engagement for individuals with serious mental illness involved in Mental Health Courts (MHC). However, the limited availability of social and fiscal resources requires an analysis of the relationship between a program's effectiveness and its costs. Outcome costs associated with a sample of 105 participants discharged for more than 1 year – and grouped by completion status – were compared to an eligible sample not enrolled (n = 45). Transactional costs analysis (TCA) was used to calculate outcomes associated with treatment, arrest, and confinement in the 12-month post-MHC. Total outcome costs for the Successful Group ($16,964) significantly differed from the Unsuccessful ($32,258) and Compare Groups ($39,870). Costs associated with the higher number of arrests for those in the Compare Group created the largest differences. Total cost savings between Successful and Compare (M = $22,906) equated to $916,240 and savings between Unsuccessful and Compare (M = $7612) were $494,708. The total combined cost savings for participants in the 12-month post-MHC period was $1,411,020. While it is important to understand that MHCs and the individuals that they serve vary and these results are for a felony-level court, policy makers and researchers can use these results to guide their decision-making.

The number of people with serious mental illness (SMI) in jails ranges from six to 36% (Abram et al., 2003, Kubiak et al., 2012, Steadman et al., 2009, Teplin et al., 1996 and Trestman et al., 2007). As one potential solution to this social problem, local jurisdictions have implemented various diversionary programs in which offenders with a mental illness are given an opportunity to substitute prosecution and incarceration for mandatory prescribed treatments. The mental health court (MHC) is an example of a post-booking diversion program that utilizes treatment and services available in a given community to decrease confinement and stem the frequency of mentally ill offenders’ contacts with the criminal justice system. MHC are a type of problem-solving court (also called specialty courts or therapeutic courts), which are an alternative to traditional criminal court processing (Bazelon Center for Mental Health Law, 2003 and Goodale et al., 2013). The explicit goals of the MHC are to decrease incarceration, increase treatment continuity, and enhance functioning of individuals with mental illness (Bazelon Center for Mental Health Law, 2003 and Goodale et al., 2013). However, the implicit goals of MHC are to decrease the financial burden and oppressive court dockets of the courts and criminal justice system. While numerous studies have pointed to positive outcomes in terms of reduced recidivism (Christy et al., 2005, Hiday et al., 2013, McNiel and Binder, 2007, Moore and Hiday, 2006 and Steadman et al., 2011) and increased mental health treatment (Boothroyd et al., 2003 and Herinckx et al., 2005), there has been little analysis of cost savings or costs avoided as a result of MHC interventions (i.e. Ridgely et al., 2007 and Rossman et al., 2012). The criminal/legal involvement of persons with mental illness of multiple arrests, court processing, and possible incarcerations is costly. Moreover, inconsistent treatment utilization or medication maintenance may result in high-level mental health services such as psychiatric hospitalization, whereas routine and low-level services associated with MHC (i.e., case management, med reviews) might prevent instability and potentially save costs. To date, there has been little information about costs and/or savings attributable to MHC. However, limited availability of resources requires an analysis of the relationship between a program's effectiveness and its costs. Although there is some evidence that drug courts produce a cost savings (Carey and Finigan, 2004, Crumpton et al., 2004 and Marchand et al., 2006), there are few published cost analyses of MHC (Ridgely et al., 2007 and Rossman et al., 2012). Moreover, cost analyses of problem-solving courts are generally conducted when the participant remains active in the program and under intense court supervision, so that the impacts on future expenditures are not quantified, leading toward an underestimate bias. This study examines a MHC in an urban Midwestern city, in operation since 2009, which focuses on individuals with SMI who have been convicted of felony offenses. Our primary interest in this study is the long-term effects of MHC, rather than the specific treatment or service costs attributable to the operation of the court. Many researchers (including the authors – see Online Appendix) have examined program costs and intermediate outcomes of MHC, however, very few have examined long term outcomes (see Hiday & Ray, 2010 for a study of 2-year outcomes), and no one to the best of our knowledge has examined if cost savings are sustained during the post-MHC period. Therefore, we utilize a treatment and comparison group sample in the first year post-MHC involvement. As specialty courts, such as MHC, drug court, veterans’ court, etc., expand across the country, it is important to determine if the implicit goal of cost effectiveness is met.

6. Conclusions MHCs mandate mental health treatment in order to increase functionality and thereby reduce crime by those who suffer from mental illness. These courts divert offenders from society's typical system for criminal behavior and mandate treatment for the underlying problem that causes the person to commit crime by using a unique blend of compassion and coercion. This study found that the combined cost savings for participants in the 12-month post-MHC period was $1,417,740, providing new information on the efficiency and sustainability of MHC treatment effects. Although smaller for those unsuccessful, there was a treatment effect irrespective of participant completion status. The costs – and savings – of the entire MHC program are of interest for perspective, scope, and history. Cost figures reported here can be used by other MHC researchers for comparison to other MHC or specialty court and diversion programs (cost effectiveness analysis) or the costs of offering no specialty or diversion programs. Total cost figures can be used by policy advocates to compare the scope of the MHC system to other social policy and social service programs such as education, job training, homeland security, and infrastructure building (cost utility analysis). Lastly, cost figures can be used to gauge the direction of the MHC program. In considering these outcomes, it is important to understand that MHCs vary across jurisdictions. For practitioners and policy makers contemplating a MHC, it is emphatically noted that these outcomes apply to felony offenders. The variations in eligibility criteria, processes for treatment engagement, use of jail sanctions, as well as the type of presiding court they are embedded within, have impact on the associated costs. For example, many MHC limit eligibility to individuals with misdemeanor offenses, which may include sanctions of minimal jail time and/or fines, compared to those that admit felony offenders that are more likely to serve jail/prison time and be under probation supervision for a longer period. The findings here are associated with persons convicted of a felony offense and may not be applicable to those with misdemeanor offenses or MHC who limit eligibility to those with presumably less risk. Both MHC and drug courts have demonstrated more favorable outcomes for those with more serious risk. Accordingly, this study reveals that this urban MHC experiences significant cost savings in the years following release from the court's mandated treatment regimen.