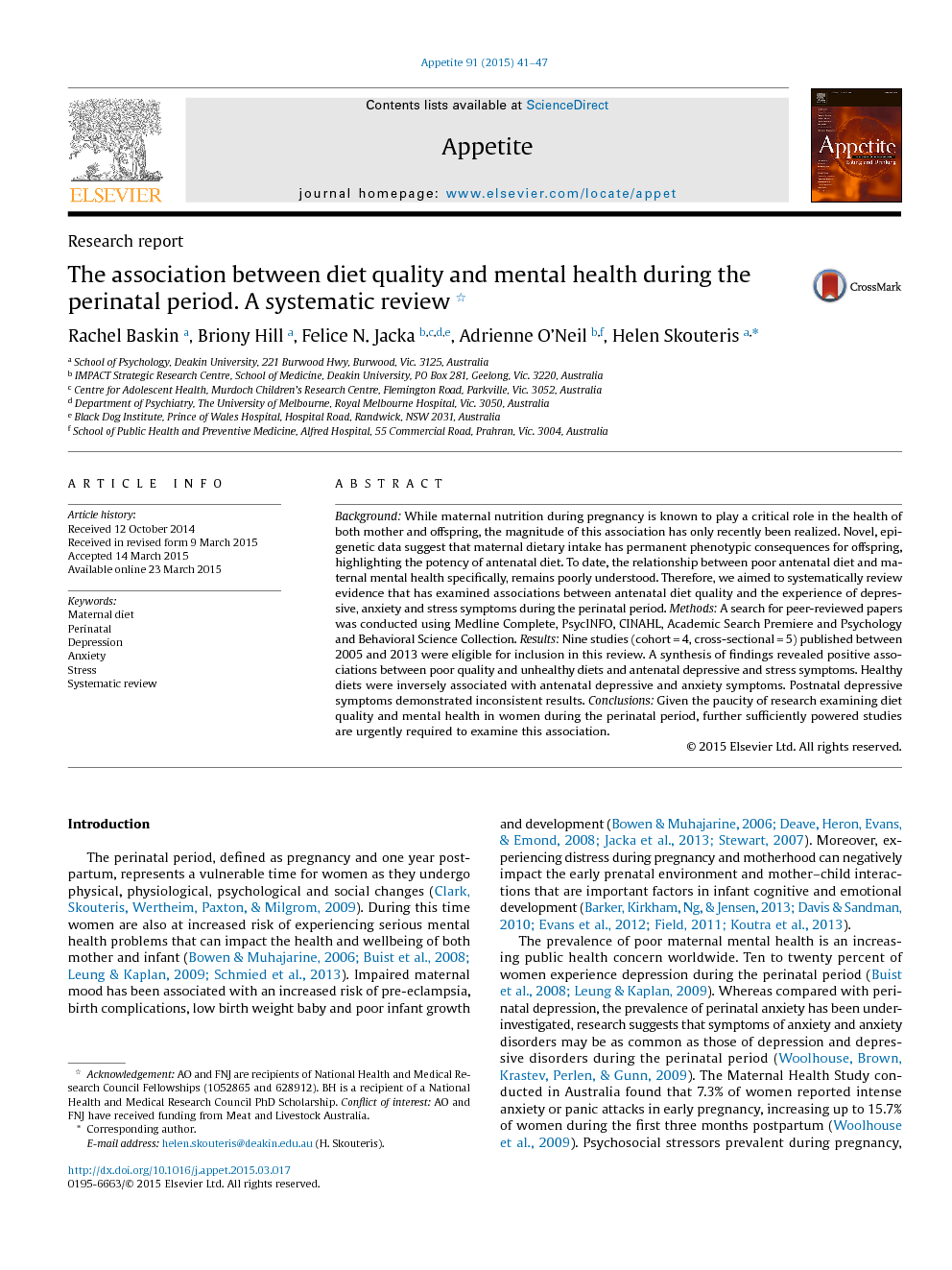 Background: While maternal nutrition during pregnancy is known to play a critical role in the health of both mother and offspring, the magnitude of this association has only recently been realized. Novel, epigenetic data suggest that maternal dietary intake has permanent phenotypic consequences for offspring, highlighting the potency of antenatal diet. To date, the relationship between poor antenatal diet and maternal mental health specifically, remains poorly understood. Therefore, we aimed to systematically review evidence that has examined associations between antenatal diet quality and the experience of depressive, anxiety and stress symptoms during the perinatal period. Methods: A search for peer-reviewed papers was conducted using Medline Complete, PsycINFO, CINAHL, Academic Search Premiere and Psychology and Behavioral Science Collection. Results: Nine studies (cohort = 4, cross-sectional = 5) published between 2005 and 2013 were eligible for inclusion in this review. A synthesis of findings revealed positive associations between poor quality and unhealthy diets and antenatal depressive and stress symptoms. Healthy diets were inversely associated with antenatal depressive and anxiety symptoms. Postnatal depressive symptoms demonstrated inconsistent results. Conclusions: Given the paucity of research examining diet quality and mental health in women during the perinatal period, further sufficiently powered studies are urgently required to examine this association.

The perinatal period, defined as pregnancy and one year postpartum, represents a vulnerable time for women as they undergo physical, physiological, psychological and social changes (Clark, Skouteris, Wertheim, Paxton, & Milgrom, 2009). During this time women are also at increased risk of experiencing serious mental health problems that can impact the health and wellbeing of both mother and infant (Bowen, Muhajarine, 2006, Buist et al, 2008, Leung, Kaplan, 2009 and Schmied et al, 2013). Impaired maternal mood has been associated with an increased risk of pre-eclampsia, birth complications, low birth weight baby and poor infant growth and development (Bowen, Muhajarine, 2006, Deave et al, 2008, Jacka et al, 2013 and Stewart, 2007). Moreover, experiencing distress during pregnancy and motherhood can negatively impact the early prenatal environment and mother–child interactions that are important factors in infant cognitive and emotional development (Barker et al, 2013, Davis, Sandman, 2010, Evans et al, 2012, Field, 2011 and Koutra et al, 2013). The prevalence of poor maternal mental health is an increasing public health concern worldwide. Ten to twenty percent of women experience depression during the perinatal period (Buist et al, 2008 and Leung, Kaplan, 2009). Whereas compared with perinatal depression, the prevalence of perinatal anxiety has been under-investigated, research suggests that symptoms of anxiety and anxiety disorders may be as common as those of depression and depressive disorders during the perinatal period (Woolhouse, Brown, Krastev, Perlen, & Gunn, 2009). The Maternal Health Study conducted in Australia found that 7.3% of women reported intense anxiety or panic attacks in early pregnancy, increasing up to 15.7% of women during the first three months postpartum (Woolhouse et al., 2009). Psychosocial stressors prevalent during pregnancy, including financial concerns, lack of social support and drug or alcohol abuse further increase the risk of perinatal distress (Littleton, Bye, Buck, & Amacker, 2010). Consequently, it is imperative to identify modifiable lifestyle factors that contribute to the development of mental health problems in mothers (and potentially their offspring) and develop appropriate interventions for at-risk populations. The relationship between diet and mental illness has garnered much attention over the past five years (Lai et al, 2014, Psaltopoulou et al, 2013 and Quirk et al, 2013). Previous research in women during pregnancy and postpartum has focused on the intake of individual micronutrients and vitamins with inverse associations observed between the intake of zinc, iron, vitamin D, selenium, omega-3 fatty acids, folic acid and depressive symptoms (Bodnar, Wisner, 2005, Ellsworth-Bowers, Corwin, 2012, Freeman, 2006, Leung et al, 2013, Murphy et al, 2010 and Roy et al, 2010). However, not all studies have supported an association between nutrients and depressive symptoms (Blunden et al, 2012, Bodnar et al, 2012, Lewis et al, 2012 and Miyake et al, 2006). Given the complex interactions among the many micronutrients, minerals and vitamins that make up habitual diet, studying individual nutrients in isolation may provide an incomplete analysis of the relationship between diet and mental health (Jacka et al., 2010). Quirk et al. (2013) were the first to systematically review the association between diet quality, dietary patterns and depression in general adult populations. The authors concluded that there was limited evidence to support an association between traditional healthy, Mediterranean and Norwegian diets and decreased depressive symptoms, and they called for stronger and more consistent evidence in this area (Quirk et al., 2013). A subsequent systematic review and meta-analysis that incorporated the increasing number of studies in this area revealed that a healthy diet was significantly associated with a reduced likelihood of depressive symptoms (Lai et al., 2014). This study reported a positive association between unhealthy Western diets and the odds of depressive symptoms; however, this association was not significant, potentially due to the relative lack of available studies on this topic (Lai et al., 2014). While fewer studies have explored the association between diet quality and anxiety and stress, there is evidence to suggest that the mechanism underlying the association between diet quality and mental illness is not limited to depressive symptoms (Jacka et al., 2010). This paper is the first to present the findings of a systematic review of published studies that have examined the relationship between antenatal diet quality and mental health outcomes in the perinatal period. Explicating this relationship during this unique period is of increasing importance. Firstly, pregnancy is a period during which nutritional requirements and energy needs are increased and are important to the health outcomes of both mother and baby (Hure, Young, Smith, & Collins, 2009). Secondly, numerous factors during this period influence a woman's dietary choices and quality, including nausea, fatigue and food cravings (Kaiser & Allen, 2008). Thirdly, pregnancy is a time during which most women are engaged with health services, thus presenting opportunity for intervention. Finally, a majority of women are currently failing to meet nutritionally recommended standards when planning to become pregnant or during pregnancy (Hure et al, 2009 and Kaiser, Allen, 2008). There is thus a need to further investigate the possible implications of dietary behaviors on mental health during this critical period. This review subsequently addressed the following questions: 1. What is the association between diet quality during pregnancy and antenatal depression, anxiety and/or stress? 2. What is the association between diet quality during pregnancy and postnatal depression, anxiety and/or stress?