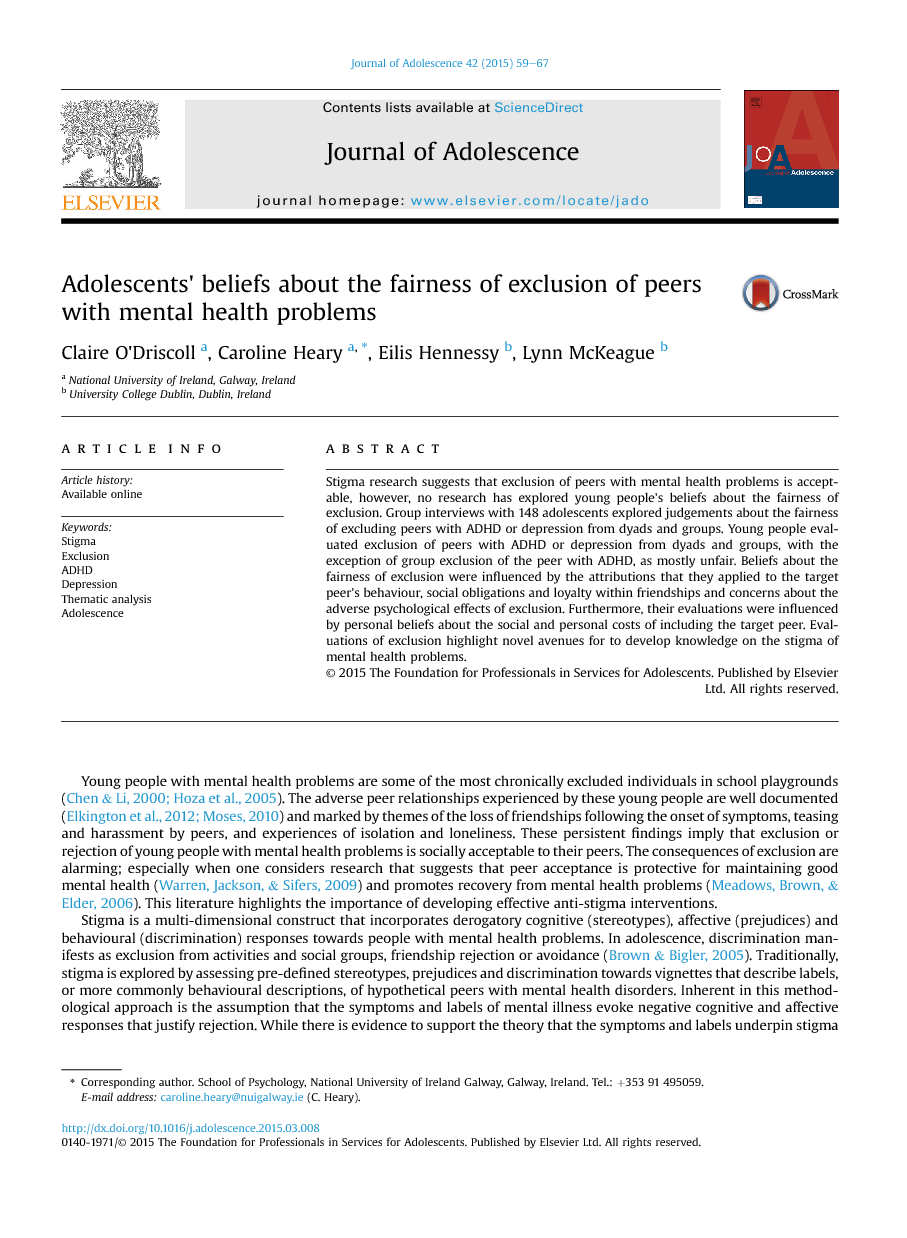 Young people with mental health problems are some of the most chronically excluded individuals in school playgrounds (Chen and Li, 2000 and Hoza et al., 2005). The adverse peer relationships experienced by these young people are well documented (Elkington et al., 2012 and Moses, 2010) and marked by themes of the loss of friendships following the onset of symptoms, teasing and harassment by peers, and experiences of isolation and loneliness. These persistent findings imply that exclusion or rejection of young people with mental health problems is socially acceptable to their peers. The consequences of exclusion are alarming; especially when one considers research that suggests that peer acceptance is protective for maintaining good mental health (Warren, Jackson, & Sifers, 2009) and promotes recovery from mental health problems (Meadows, Brown, & Elder, 2006). This literature highlights the importance of developing effective anti-stigma interventions. Stigma is a multi-dimensional construct that incorporates derogatory cognitive (stereotypes), affective (prejudices) and behavioural (discrimination) responses towards people with mental health problems. In adolescence, discrimination manifests as exclusion from activities and social groups, friendship rejection or avoidance (Brown & Bigler, 2005). Traditionally, stigma is explored by assessing pre-defined stereotypes, prejudices and discrimination towards vignettes that describe labels, or more commonly behavioural descriptions, of hypothetical peers with mental health disorders. Inherent in this methodological approach is the assumption that the symptoms and labels of mental illness evoke negative cognitive and affective responses that justify rejection. While there is evidence to support the theory that the symptoms and labels underpin stigma (Corrigan et al., 2007), arguably, however, it only accounts for a portion of why stigma occurs. Absent from the existing literature is an account of the influence of other factors such as social norms and conventions and moral judgements about the fair treatment of others within the peer group. According to Social Domain Theory (SDT, Turiel, 1983) these value-laden factors provide a culture that fosters or condemns the acceptability of rejection of minority individuals or groups (see Killen, Mulvey, & Hitti, 2012). To explore the influence of social norms and moral judgements on beliefs about exclusion, SDT researchers present participants with vignettes that describe exclusion scenarios involving hypothetical peers (Killen, Rutland, Abrams, Mulvey, & Hitti, 2013). Participants' views on the fairness of the exclusion and their rationale for such evaluations are then explored. In the context of sex, race, and ethnicity, SDT research suggests that when evaluating peer exclusion scenarios, children and adolescents use moral (“it's not fair because she will feel sad”), social conventional (“it's better for the rest of the group if he is not invited”) and psychological reasons (“it's her personal choice whom she befriends”). An overriding theme to emerge from SDT research is that exclusion is often deemed acceptable to maintain status differences and to uphold cohesion in the peer group (Killen et al., 2012). Stigma and SDT research, respectively, point to sex and age as important factors in shaping how young people think about peers with mental health problems and peer exclusion. In the stigma literature, research generally implicates males as more stigmatising towards mental illness compared to females (Jorm and Wright, 2008 and Williams and Pow, 2007) and that stigma worsens with age (Wahl, 2002). However, when explored together, research shows that often developmental and sex trends are inter-dependent, such that differences in responses are contingent on the perceivers' sex and age, the target peer's sex and mental health disorder (O'Driscoll et al., 2012 and Swords et al., 2011). In the SDT literature, research shows that young people increasingly rationalise about exclusion by reflecting on group functioning and group identity (Aboud, 2008); consequently, exclusion tends to become more acceptable with age (Malti et al., 2012 and Park and Killen, 2010). Furthermore, SDT research suggests that females tend to show greater concern for inclusivity of peers across a variety of exclusion contexts (Malti et al., 2012 and Park and Killen, 2010). To date, no research has explored young people's views on the acceptability of exclusion of peers with mental health problems. However, when asked to explain why hypothetical peers with depression or attention deficit hyperactivity disorder (ADHD) were excluded, young people justified exclusion because the target peers could not conform to the social rules and conventions attached to friendship dyads and groups (O'Driscoll, Heary, Hennessy, & McKeague, 2014). Furthermore, they reported that including a peer with a mental health problem posed social and personal risks to members of the peer group. Although, this study provided insight into the function of exclusion it did not report data on the acceptability of exclusion. Thus we continue to have little understanding of how young people reason about exclusion decisions specific to peers with mental health difficulties. Drawing from the lessons learned in the racial and gender literature, we argue that developing a comprehensive understanding of peer values and norms that underpin the existence of stigma can enhance future development of anti-stigma interventions. The present study provides an exploratory insight into young people's beliefs about the fairness of exclusion of peers with mental health problems. ADHD and depression were chosen as they are two of the most common childhood mental health disorders (Merikangas, Nakamura, & Kessler, 2009). Reasoning about exclusion is often context dependent (Killen, Kelly, Richardson, Crystal, & Ruck, 2010); thus dyad and group contexts were employed. To gain a cross-developmental perspective, responses of young people in early and mid-adolescence were explored. This paper aims to advance knowledge on the exclusion of peers with mental health problems in adolescence. Specifically, the aims were (a) to explore adolescents' beliefs about the fairness of excluding peers with either ADHD or depression; (b) to examine any age and sex patterns in adolescents' responses; and (c) to investigate any common or unique views across the two exclusion contexts as well as the two target disorders.