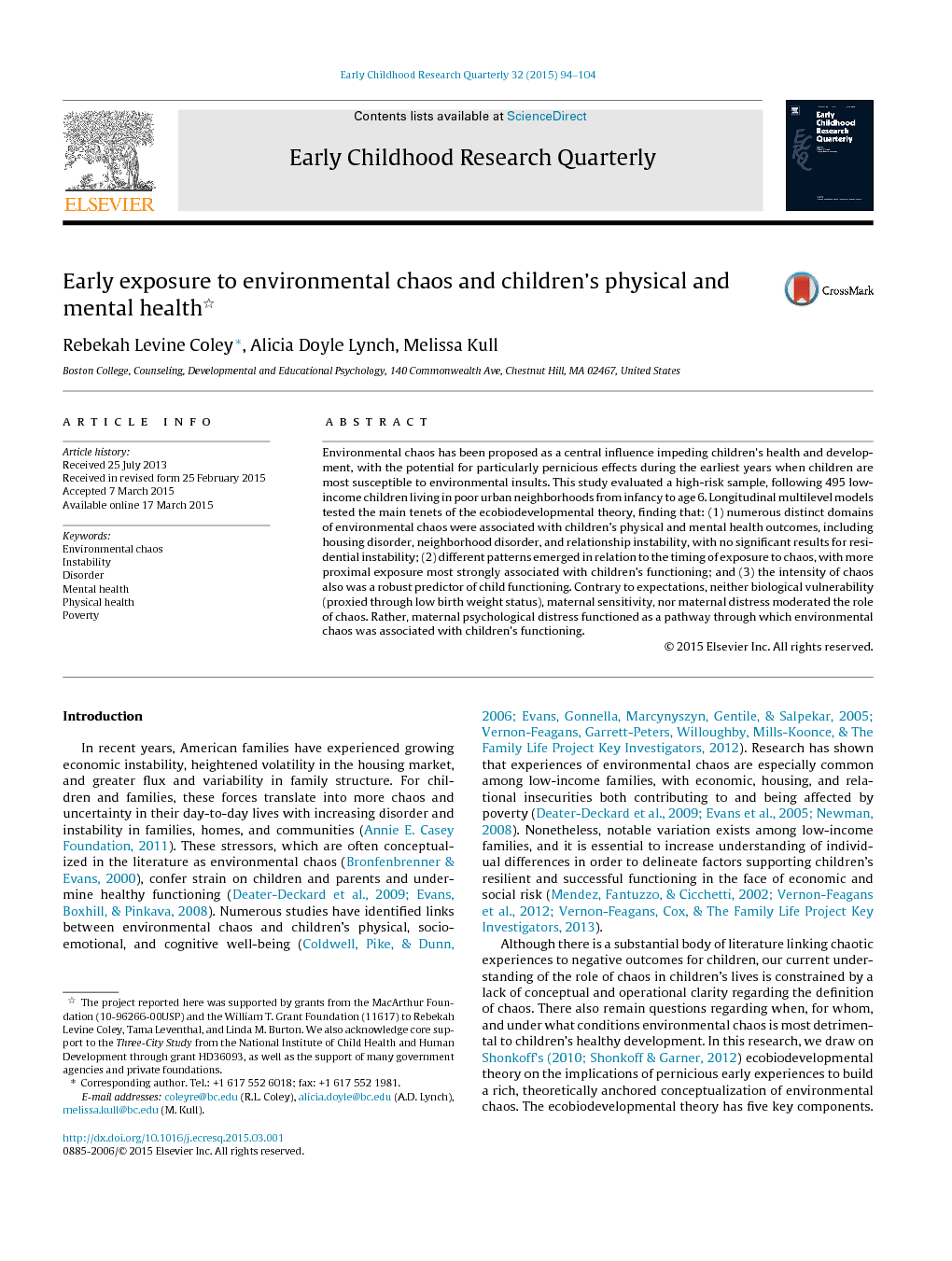 Environmental chaos has been proposed as a central influence impeding children's health and development, with the potential for particularly pernicious effects during the earliest years when children are most susceptible to environmental insults. This study evaluated a high-risk sample, following 495 low-income children living in poor urban neighborhoods from infancy to age 6. Longitudinal multilevel models tested the main tenets of the ecobiodevelopmental theory, finding that: (1) numerous distinct domains of environmental chaos were associated with children's physical and mental health outcomes, including housing disorder, neighborhood disorder, and relationship instability, with no significant results for residential instability; (2) different patterns emerged in relation to the timing of exposure to chaos, with more proximal exposure most strongly associated with children's functioning; and (3) the intensity of chaos also was a robust predictor of child functioning. Contrary to expectations, neither biological vulnerability (proxied through low birth weight status), maternal sensitivity, nor maternal distress moderated the role of chaos. Rather, maternal psychological distress functioned as a pathway through which environmental chaos was associated with children's functioning.

In recent years, American families have experienced growing economic instability, heightened volatility in the housing market, and greater flux and variability in family structure. For children and families, these forces translate into more chaos and uncertainty in their day-to-day lives with increasing disorder and instability in families, homes, and communities (Annie E. Casey Foundation, 2011). These stressors, which are often conceptualized in the literature as environmental chaos (Bronfenbrenner & Evans, 2000), confer strain on children and parents and undermine healthy functioning (Deater-Deckard et al., 2009 and Evans et al., 2008). Numerous studies have identified links between environmental chaos and children's physical, socio-emotional, and cognitive well-being (Coldwell et al., 2006, Evans et al., 2005 and Vernon-Feagans et al., 2012). Research has shown that experiences of environmental chaos are especially common among low-income families, with economic, housing, and relational insecurities both contributing to and being affected by poverty (Deater-Deckard et al., 2009, Evans et al., 2005 and Newman, 2008). Nonetheless, notable variation exists among low-income families, and it is essential to increase understanding of individual differences in order to delineate factors supporting children's resilient and successful functioning in the face of economic and social risk (Mendez et al., 2002, Vernon-Feagans et al., 2012 and Vernon-Feagans et al., 2013). Although there is a substantial body of literature linking chaotic experiences to negative outcomes for children, our current understanding of the role of chaos in children's lives is constrained by a lack of conceptual and operational clarity regarding the definition of chaos. There also remain questions regarding when, for whom, and under what conditions environmental chaos is most detrimental to children's healthy development. In this research, we draw on Shonkoff, 2010 and Shonkoff and Garner, 2012) ecobiodevelopmental theory on the implications of pernicious early experiences to build a rich, theoretically anchored conceptualization of environmental chaos. The ecobiodevelopmental theory has five key components. Below we briefly discuss each of the five components, review relevant empirical support, and identify enduring questions.

The current study expands on past empirical work by testing multiple components of the ecobiodevelopmental model (Shonkoff, 2010 and Shonkoff and Garner, 2012) concerning hypothesized links between environmental chaos and child well-being. Our findings support the idea that environmental chaos is detrimental during the first years of life with chaotic housing environments predicting deficits in early health and basic developmental milestones. In contrast, neighborhood disorder and relationship instability were more potent predictors of children's mental health as they entered elementary school. The intensity of chaos was associated with less healthy development across multiple periods and domains of functioning. By employing a within-group design focused on environmental chaos among low-income families in high-poverty, urban neighborhoods, the present study yields important implications. The findings in this study may be useful to both practitioners and policy-makers, helping to inform early childhood and family programming; federal, state, and local housing and community programs; and low-income family subsidies. Such programs and policies may seek to improve the maintenance of the housing stock in low-income communities; to enhance the levels of safety and community involvement in urban neighborhoods; and to increase couples’ abilities to sustain stable, healthy relationships. Targeting programs and policies to specific populations and developmental windows may help to shield against the negative effects of environmental chaos and to promote the healthy development of low-income children.