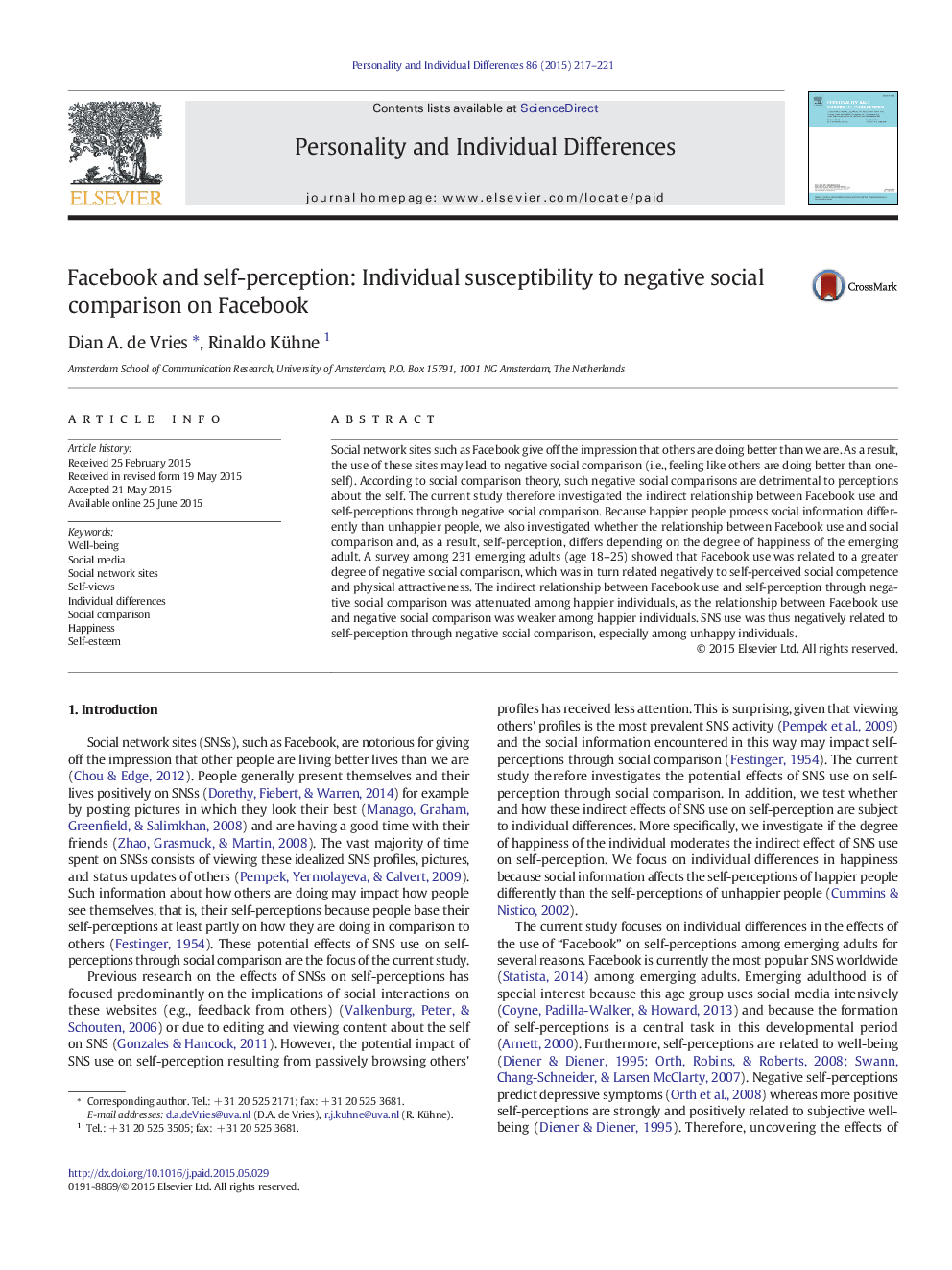 4. Discussion and conclusions Previous research has shown that SNS use is positively related to well-being through social interactions (Valkenburg et al., 2006). With regard to social interaction on Facebook, a poor-get-richer effect is seen in which emerging adults who are less satisfied with their lives benefit most from Facebook use in terms of increased social capital (Ellison et al., 2007). The results of the current study, however, shed light on an additional but contrasting route through which SNS use can harm well-being in a poor-get-poorer manner. Namely, the current study shows that SNS use is related to more negative self-perception through negative social comparison. These negative relationships were strongest among those emerging adults who were unhappier. Negative self-perceptions are negatively related to well-being (Diener and Diener, 1995, Orth et al., 2008 and Swann et al., 2007). Therefore, Facebook use may negatively impact youth's well-being by stimulating negative social comparison and fostering negative self-perception, especially among those emerging adults who are already unhappy. Together, previous research and the current study thus suggest that SNS use can impact self-perceptions and well-being in positive and negative ways through different routes. Which route is stronger likely depends on the individual user and the activities engaged in on the website. When engaging in social interaction, the positive effects through social capital and positive feedback are more likely. In contrast, looking at the posts of others may have negative effects on well-being through social comparison. The current study did not distinguish between these active and passive SNS activities, as it investigated general Facebook use. Furthermore, we do not know how the two contrasting routes weigh up against each other, as the current study did not measure social interaction. Future research should identify which SNS activities are related to which of these (and potential additional) processes in order to understand the net effect of SNS use on well-being resulting from different combinations of SNS activities. Our analyses showed that nationality of the participants did not have any effect on negative social comparison or on self-perception. Neither did nationality function as a moderator and influence the size or direction of any effect. Still, the moderate sample size, especially of the subsamples that were not Bulgarian, and the heterogeneous nature of our sample are limitations. We thus suggest replications of this study in different cultural contexts and with larger samples. This would not only help to address these limitations, but also offer an opportunity to check whether our findings generalize to other countries and age groups. Due to the cross-sectional nature of this study, we cannot be sure whether SNS use impacts self-perception through social comparison, whether the effect is in the opposite direction, or if it is explained by a third factor. However, the current explanation of the relationships is in line with social comparison theory (Festinger, 1954). Furthermore, experimental evidence has shown that looking at people who are doing well on Facebook can indeed cause negative effects on self-perception (Haferkamp & Krämer, 2011). The current correlational study builds on this work by showing that Facebook use indeed goes hand in hand with such negative social comparisons in real life; that SNS use is negatively related to self-perceptions through this negative social comparison; and that these negative relationships are strongest among people who are unhappy. In summary, the current study advances our knowledge firstly about the different manners in which SNS use can impact self-perception and secondly about what groups of young people are particularly affected by SNS use. In this way, the current study is another step in the development of a comprehensive model that predicts and explains whose self-perception and well-being is influenced by which social media activities in what way. This knowledge is vital if we want to maximize the benefits and minimize the risks of social media for the well-being of young people.