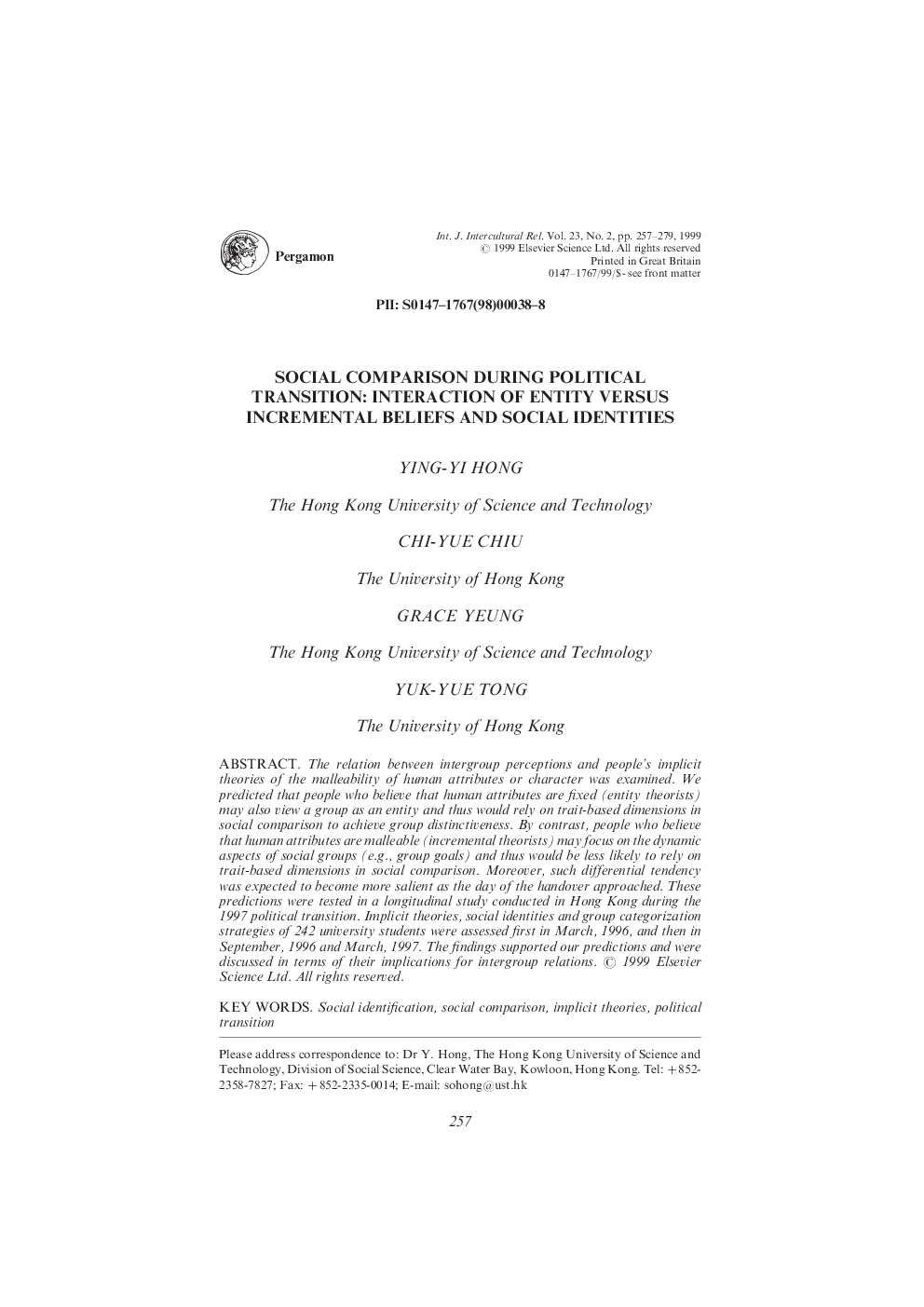 Abstract The relation between intergroup perceptions and peoples implicit theories of the malleability of human attributes or character was examined. We predicted that people who believe that human attributes are fixed (entity theorists) may also view a group as an entity and thus would rely on trait-based dimensions in social comparison to achieve group distinctiveness. By contrast, people who believe that human attributes are malleable (incremental theorists) may focus on the dynamic aspects of social groups (e.g., group goals) and thus would be less likely to rely on trait-based dimensions in social comparison. Moreover, such differential tendency was expected to become more salient as the day of the handover approached. These predictions were tested in a longitudinal study conducted in Hong Kong during the 1997 political transition. Implicit theories, social identities and group categorization strategies of 242 university students were assessed first in March, 1996, and then in September, 1996 and March, 1997. The findings supported our predictions and were discussed in terms of their implications for intergroup relations.

8. Extensions, implications and conclusion Although the present article focused on the social comparison processes, our analysis can be applied to other group processes as well. Recently, Brewer and Harasty, 1996 have described in detail the possible perceptual, self-regulatory and motivational consequences that are more associated with a group entitativity assumption than with a group dynamics assumption. Regarding group perception, an entity representation of social groups is related to exaggeration in the perceived homogeneity of a group with respect to the defining attribute of the group (e.g., Almost all Hong Kong Chinese are smart and efficient. or Almost all Chinese Mainlanders are ignorant.) (Hong and Chiu, 1997, Study 1; see also Brewer and Harasty, 1996). Also, with an entitativity representation, individuals are also likely to have stereotypical perceptions of group members. Since a group is a real entity, group membership and its associated stereotypical attributes could be used as a valid basis for judging individual members of a group (Hong and Chiu, 1997, Study 3; cf. Oakes et al., 1991). In addition, when social groups are seen as real entities, group memberships may be seen as important bases for defining the self. In this respect, Hong and Chiu (Hong and Chiu, 1997,Study 4) have shown that some individuals may use a social category and its associated normative expectations as self-guides. Such individuals feel that their group identities are important for organizing their goals, obligations, aspirations, beliefs, values and life-style. Once social categories are represented as entities, not only can group membership be used as a heuristic for judging others and for regulating the self, it could also be used as an action guide. There is ample evidence to suggest that individuals who treat groups as entities tend to use group membership as a criterion for reward and punishment allocation (Hong and Chiu, 1997,Studies 1 and 2; Hong et al., 1996a). In short, an entitative representation of a group seems to be associated with a number of interesting group processes. We posit that such group processes may also be related to implicit theories about the malleability of personal attributes. Indeed, we have recently obtained evidence that Hong Kong people who subscribe to an entity theory have a greater tendency to perceive Chinese Mainlanders as a homogeneous group, and to stereotype and discriminate against Chinese Mainlanders (Hong and Chiu, 1997). It thus appears that an entity belief is associated with a more rigid, global (evaluative) perceptions of the Chinese Mainlander group, as well as more prejudicial and discriminatory practices against them. Civic education that highlights the malleability of personal attributes and dynamic group processes may help change some Hong Kong peoples entity beliefs of individuals and groups. Such changes in beliefs may in turn result in better intergroup relations after 1997. To conclude, the present research suggests that many of the group processes social psychologists have studied maybe organized around the assumptions individuals make about social groups, which are in turn linked to individuals beliefs about human nature.Altemeyer, 1981, Coopersmith, 1967, Kerlinger, 1984, Paulhus, 1984, Snyder, 1974