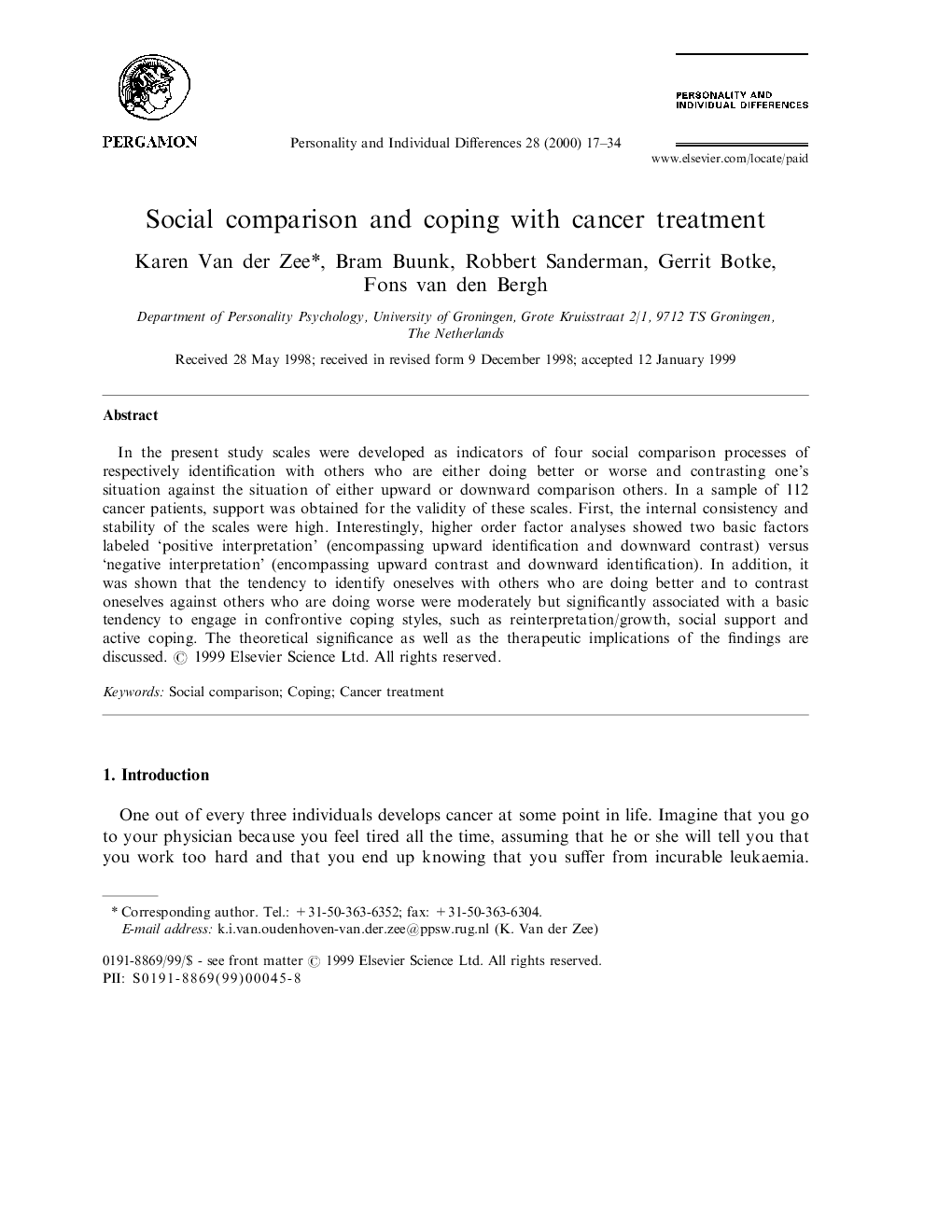 Abstract In the present study scales were developed as indicators of four social comparison processes of respectively identification with others who are either doing better or worse and contrasting one's situation against the situation of either upward or downward comparison others. In a sample of 112 cancer patients, support was obtained for the validity of these scales. First, the internal consistency and stability of the scales were high. Interestingly, higher order factor analyses showed two basic factors labeled `positive interpretation' (encompassing upward identification and downward contrast) versus `negative interpretation' (encompassing upward contrast and downward identification). In addition, it was shown that the tendency to identify oneselves with others who are doing better and to contrast oneselves against others who are doing worse were moderately but significantly associated with a basic tendency to engage in confrontive coping styles, such as reinterpretation/growth, social support and active coping. The theoretical significance as well as the therapeutic implications of the findings are discussed.

. Introduction One out of every three individuals develops cancer at some point in life. Imagine that you go to your physician because you feel tired all the time, assuming that he or she will tell you that you work too hard and that you end up knowing that you suffer from incurable leukaemia. No one will deny that such an experience is threatening and asks for a complete reevaluation of who you are and what you strive for in life. Remarkably, most individuals seem to adapt to such threatful events rather effectively. For example, several studies among patients suffering from serious diseases such as cancer Morris, Greer, & White, 1977, Cassileth et al., 1984, Penman et al., 1986, Vinokur, Threatt, Caplan, & Zimmerman, 1989 and Van Knippenberg et al., 1992 or spinal cord injuries (Schulz, & Decker, 1985) have shown that these patients seem to be able to maintain a sense of well-being that is comparable to that of individuals who are not confronted with serious health threats. Although, of course, not everyone readjusts completely (Silver, & Wortman, 1980), most people manage to readjust rather effectively to problems with their health. Individuals seem to be able to cope with serious health problems by making use of the support from individuals in their social networks, that is their beloved, their friends and family members, and by using their individual coping resources Gurin, Veroff, & Feld, 1960, Wills, 1982 and Taylor, 1983. Lazarus and Folkman (1984) define coping as “constantly changing cognitive and behavioral efforts to manage specific external and/or internal demands that are appraised as taxing or exceeding the resources of the person”. In the present research the interest was in one particular strategy that may play an important role in coping with health problems. Research has shown that when confronted with serious health problems, people seem to relate their own situation to the situation of others. This process might be helpful when adapting to the threatful situation they have to face (e.g. Wood, Taylor, & Lichtman, 1985; Molleman, Pruyn, & Van Knippenberg, 1986; Taylor, Buunk, & Aspinwall, 1990; Affleck, & Tennen, 1991, Suls, Marco, & Tobin, 1991, Taylor, Buunk, Collins, & Reed, 1992a and Buunk, 1994). Earlier studies have provided evidence for the use of social comparison in a range of life contexts, including health problems (Gibbons, & Gerrard, 1991). It has for example been shown that by selectively using information from the social environment patients with serious diseases may obtain a relatively favourable comparison with one or more target others (e.g. Gerrard, Gibbons, & Sharp, 1985; Wood et al., 1985 and DeVellis et al., 1990) and that favorable comparison situation then produces an increase in subjective well-being for the comparer (Affleck, Tennen, Pfeiffer, Fifield, & Rowe, 1987; Van der Zee, Buunk, & Sanderman, 1995 and Van der Zee et al., 1996a; see also Wills, 1987 and Wills, 1997). In the present study an instrument for measuring identification and contrast processes in social comparison was developed and evaluated. First, the reliability and internal structure of the scales were examined. Second, in order to examine the validity of the instrument, its relationship with general coping styles was examined among patients who were receiving cancer treatment.