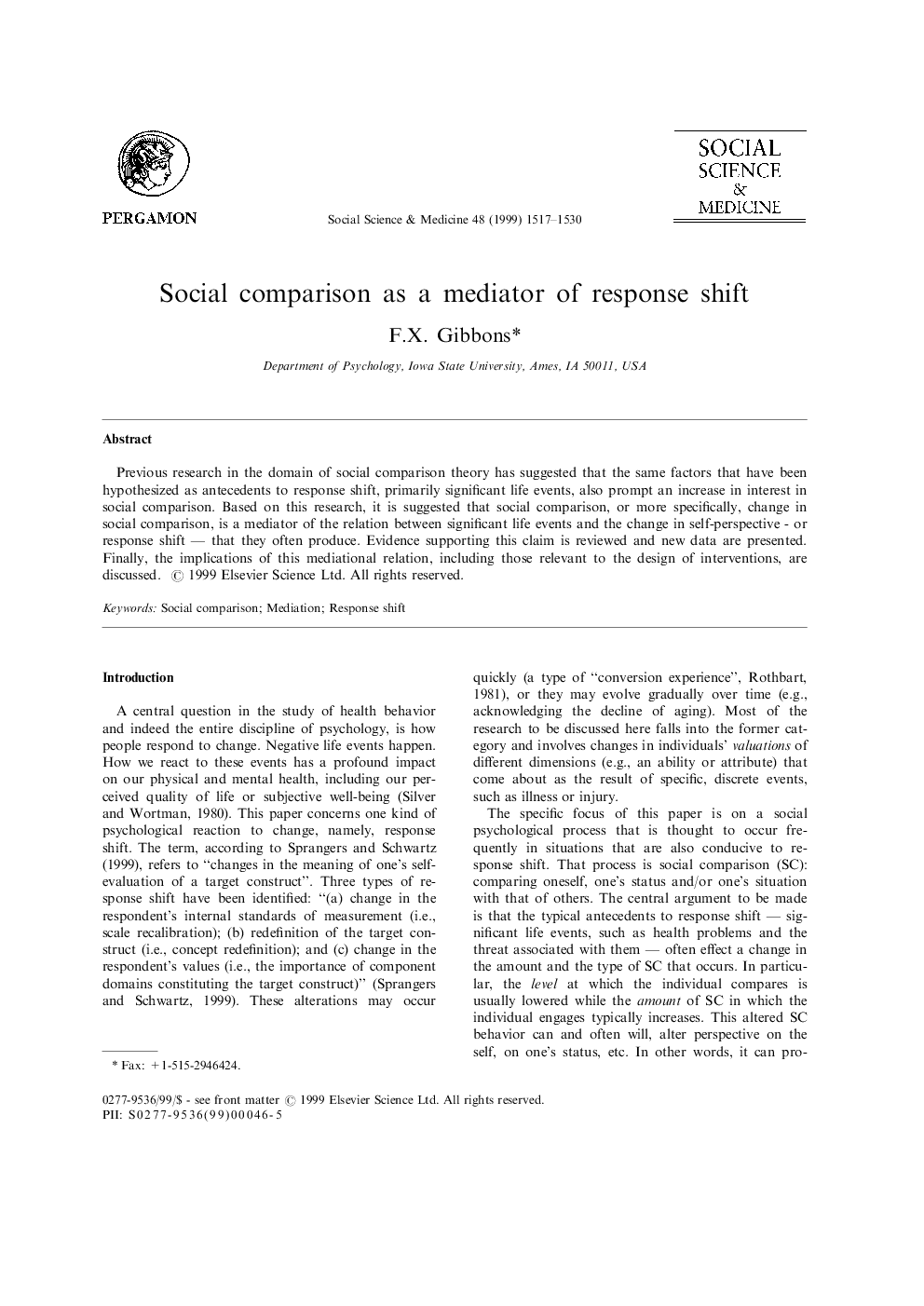 Abstract Previous research in the domain of social comparison theory has suggested that the same factors that have been hypothesized as antecedents to response shift, primarily significant life events, also prompt an increase in interest in social comparison. Based on this research, it is suggested that social comparison, or more specifically, change in social comparison, is a mediator of the relation between significant life events and the change in self-perspective - or response shift — that they often produce. Evidence supporting this claim is reviewed and new data are presented. Finally, the implications of this mediational relation, including those relevant to the design of interventions, are discussed.

Introduction A central question in the study of health behavior and indeed the entire discipline of psychology, is how people respond to change. Negative life events happen. How we react to these events has a profound impact on our physical and mental health, including our perceived quality of life or subjective well-being (Silver and Wortman, 1980). This paper concerns one kind of psychological reaction to change, namely, response shift. The term, according to Sprangers and Schwartz (1999), refers to “changes in the meaning of one's self-evaluation of a target construct”. Three types of response shift have been identified: “(a) change in the respondent's internal standards of measurement (i.e., scale recalibration); (b) redefinition of the target construct (i.e., concept redefinition); and (c) change in the respondent's values (i.e., the importance of component domains constituting the target construct)” (Sprangers and Schwartz, 1999). These alterations may occur quickly (a type of “conversion experience”, Rothbart, 1981), or they may evolve gradually over time (e.g., acknowledging the decline of aging). Most of the research to be discussed here falls into the former category and involves changes in individuals' valuations of different dimensions (e.g., an ability or attribute) that come about as the result of specific, discrete events, such as illness or injury. The specific focus of this paper is on a social psychological process that is thought to occur frequently in situations that are also conducive to response shift. That process is social comparison (SC): comparing oneself, one's status and/or one's situation with that of others. The central argument to be made is that the typical antecedents to response shift — significant life events, such as health problems and the threat associated with them — often effect a change in the amount and the type of SC that occurs. In particular, the level at which the individual compares is usually lowered while the amount of SC in which the individual engages typically increases. This altered SC behavior can and often will, alter perspective on the self, on one's status, etc. In other words, it can produce a response shift. Thus, SC is proposed as a mediator of the relation between significant life events and response shift (other mediators are discussed in the review paper of Sprangers and Schwartz (1997)). The basic model is presented in Fig. 1.

Conclusions Considerable evidence exists indicating that life events, especially negative life events, enhance a desire for SC and a need for the type of information about the self that it produces. These events also tend to alter SC habits, primarily resulting in shifts in comparison dimensions and comparison levels. Stress-induced alterations in SC can, in turn, have a significant impact on the self in a variety of ways, including changes in state and trait affect levels, as well as changes in self-concept. The primary reason why this happens has to do with a basic proposition of SC theory, which is that comparison with others significantly influences self-knowledge. SC brings the perspective of another (or actually the self vis a vis another) into focus and that new perspective can produce a different self-perception and a different perception of one's situation or quality of life. To the extent that these changes in self-perception are relatively enduring, they are likely to involve significant cognitive alterations of one form or another. In this manner, SC processes mediate response shift phenomena. The type of alteration in SC that occurs can influence the type of response shift that results. For example, decline in preferred SC level may sometimes result in a negative response shift. Thus, individuals who routinely focus their comparative attention downward will experience a decline in performance (including, in some cases, coping performance) and an increase in depression. In contrast, upward shifts in comparison level, when used judiciously to avoid repeated failure experience, can produce an improvement in performance and/or coping success. In both cases, the effects appear to be mediated by a change in identity: repeated comparison with a particular group results in increased identification with that group. This change in identity is also a form of response shift. By the same token, some of the same strategies that have been identified as potentially interfering with effective functioning in situations that do afford a reasonable level of control, such as downward shifts in preferred comparison level, can be adaptive in low-control or no-control contexts. Under these circumstances, maintenance of old SC habits can be disruptive and very frustrating. Adjusting SC level, comparison dimensions, or perceived dimension importance (Gibbons et al., 1994) can pave the way for significant response shifts that allow the individual to accommodate and persevere after some difficult experience. Finally, it should be pointed out, once again, that the arguments presented here are based on a blending of two bodies of literature that have developed more or less independently. It is hoped that this effort at integration will prove to be of heuristic value in efforts to explore further the conceptual and empirical overlap that, in retrospect, appears quite evident.