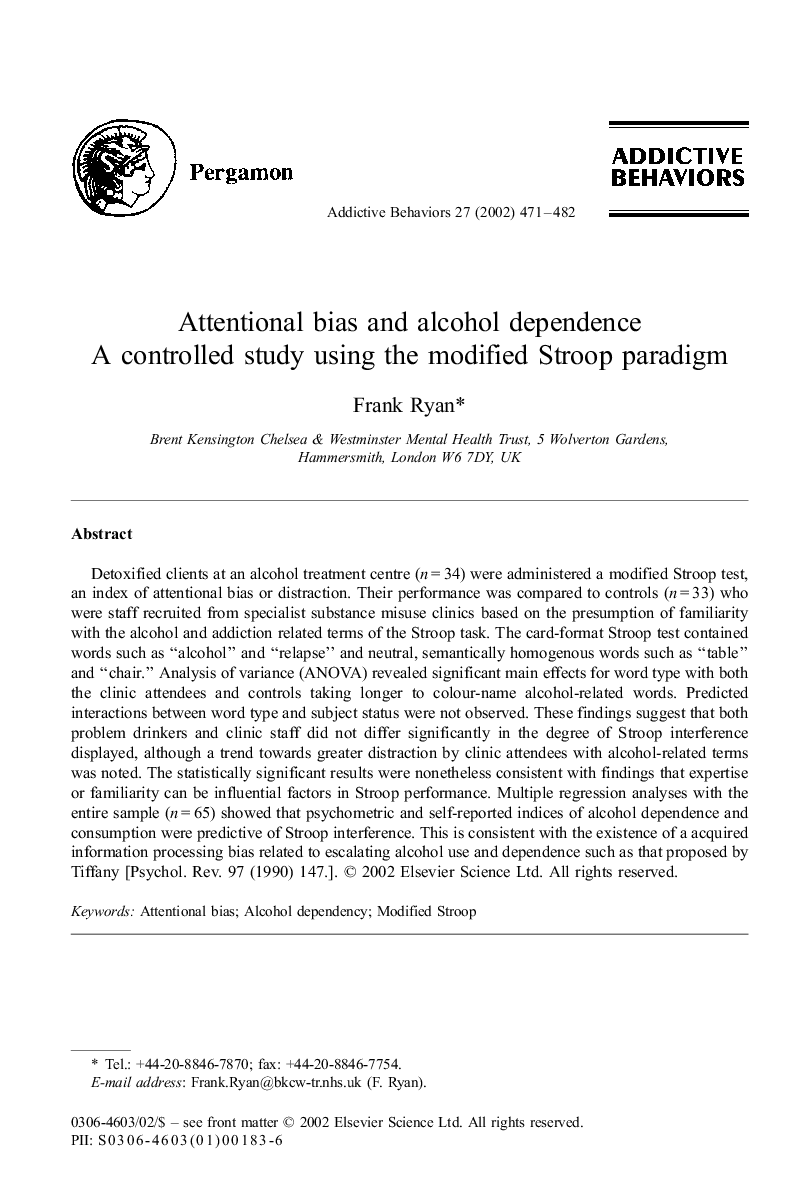 Detoxified clients at an alcohol treatment centre (n=34) were administered a modified Stroop test, an index of attentional bias or distraction. Their performance was compared to controls (n=33) who were staff recruited from specialist substance misuse clinics based on the presumption of familiarity with the alcohol and addiction related terms of the Stroop task. The card-format Stroop test contained words such as “alcohol” and “relapse” and neutral, semantically homogenous words such as “table” and “chair.” Analysis of variance (ANOVA) revealed significant main effects for word type with both the clinic attendees and controls taking longer to colour-name alcohol-related words. Predicted interactions between word type and subject status were not observed. These findings suggest that both problem drinkers and clinic staff did not differ significantly in the degree of Stroop interference displayed, although a trend towards greater distraction by clinic attendees with alcohol-related terms was noted. The statistically significant results were nonetheless consistent with findings that expertise or familiarity can be influential factors in Stroop performance. Multiple regression analyses with the entire sample (n=65) showed that psychometric and self-reported indices of alcohol dependence and consumption were predictive of Stroop interference. This is consistent with the existence of a acquired information processing bias related to escalating alcohol use and dependence such as that proposed by Tiffany [Psychol. Rev. 97 (1990) 147.].

Attentional bias involves a change in the focus of attention that can occur rapidly, involuntarily, and in advance of conscious awareness. The question addressed here was whether detoxified problem drinkers would show evidence of such selectivity towards alcohol-related stimuli and whether this would be meaningfully related to psychometric and self-reported parameters of problem drinking. The most common experimental paradigm used to assess attentional bias is the modified or “emotional” Stroop Test. This was derived from the original “colour-conflict” Stroop task (Stroop, 1935) that required the subject to respond to the word green printed in blue ink, for instance, by specifying the colour “blue.” This, it was assumed, involved the suppression of the more automatic response of reading the word, which led to a delay in the task of colour-naming. More recently, researchers have adapted the Stroop paradigm to index the presumed degree of involuntary semantic activation triggered by colour-naming words deemed relevant to the concerns of patients. Williams, Mathews, and MacLeod (1996) reviewed over 70 studies that deployed the modified Stroop and concluded that it was a valid index of attentional processing. These reviewers also affirmed the sensitivity and specificity of Stroop interference as a clinically meaningful index across a range of psychological disorders, usually where anxiety was a feature. At the inception of the present study, only one published report linked Stroop interference to addictive behaviour (Gross, Jarvik, & Rosenblatt, 1993). These researchers found that smokers deprived of nicotine for 24 h experienced more interference on a Stroop task involving the colour-naming of words linked to smoking rather than neutral words compared to a cohort allowed to smoke as normal. Broadly consistent findings have been reported with samples of eating disordered patients (e.g., Green, McKenna, & De Silva, 1994), which are relevant because, in common with addictive disorders, enhanced control over appetitive impulses is crucial to good therapeutic outcomes. Insofar as the colour-naming delays observed on the Stroop paradigm reflect task irrelevant processing, intrusion, or distraction, Stroop performance should be sensitive to the parameters of addictive disorders. This assumption stems from the fact that in common with most high frequency behaviours or routines, addictive behaviours become relatively automatised in a manner analogous to the acquisition of other complex skills such as driving. Important changes in cognitive processes occur with repeated performance of routines. Attentional processing, for instance, is sensitive to repetition or priming effects and is thus likely to reflect the prior frequency with which specific stimuli have been processed. Tiffany (1990) linked this directly to the habitual nature of drug use when he predicted that indices of automatisation should strongly relate to the amount of practice a particular drug user could report with respect to their drug of choice. The present study explored the relationship between features of alcohol use and dependence and attentional bias. The predictions were twofold: first, it was hypothesised that the clinic group of problem drinkers would manifest more Stroop delay specific to alcohol relevant words than the controls; second, it was hypothesised that indices of alcohol involvement would be positively associated with Stroop delay, again relative to the alcohol stimulus words.