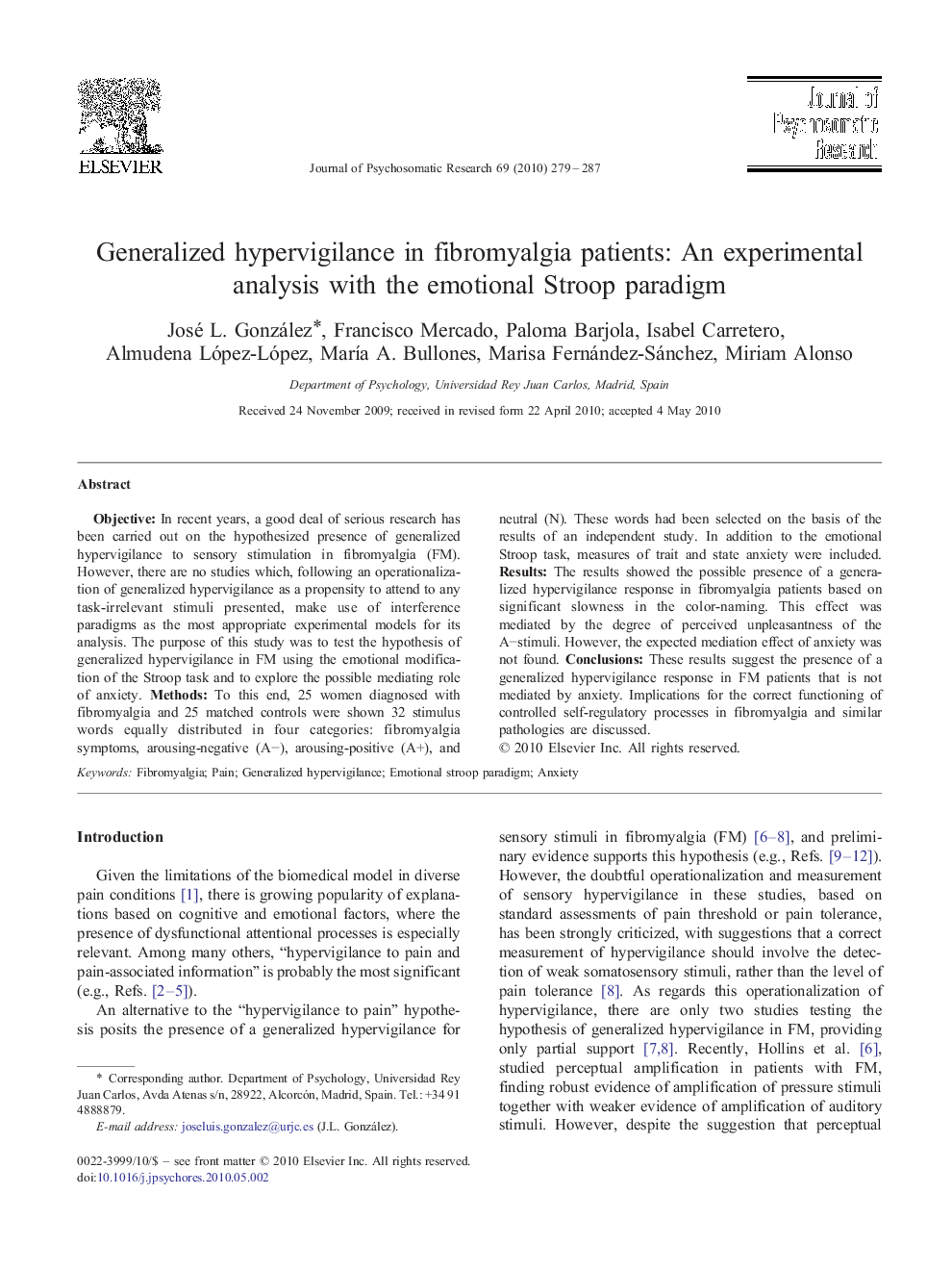 Given the limitations of the biomedical model in diverse pain conditions [1], there is growing popularity of explanations based on cognitive and emotional factors, where the presence of dysfunctional attentional processes is especially relevant. Among many others, “hypervigilance to pain and pain-associated information” is probably the most significant (e.g., Refs. [2], [3], [4] and [5]). An alternative to the “hypervigilance to pain” hypothesis posits the presence of a generalized hypervigilance for sensory stimuli in fibromyalgia (FM) [6], [7] and [8], and preliminary evidence supports this hypothesis (e.g., Refs. [9], [10], [11] and [12]). However, the doubtful operationalization and measurement of sensory hypervigilance in these studies, based on standard assessments of pain threshold or pain tolerance, has been strongly criticized, with suggestions that a correct measurement of hypervigilance should involve the detection of weak somatosensory stimuli, rather than the level of pain tolerance [8]. As regards this operationalization of hypervigilance, there are only two studies testing the hypothesis of generalized hypervigilance in FM, providing only partial support [7] and [8]. Recently, Hollins et al. [6], studied perceptual amplification in patients with FM, finding robust evidence of amplification of pressure stimuli together with weaker evidence of amplification of auditory stimuli. However, despite the suggestion that perceptual amplification and hypervigilance may be aspects of the same process, controversy still remains with respect to the most appropriate definition and delimitation of generalized hypervigilance [13] and [14]. According to Eysenck [15] and [16], general hypervigilance or distractibility is demonstrated by a propensity to attend to any task-irrelevant stimuli presented. In this direction, Crombez et al. [5] have argued that the use of situations with competing attentional demands is the preferable approach to the measurement of hypervigilance. This assertion, together with the proposition of hypervigilance as not a mechanism under conscious control (controlled processes), but largely the result of automatic processes [5], imply that the use of interference paradigms is the most appropriate experimental model for the study of hypervigilance. In this context, there is clearly a lack of studies on generalized hypervigilance in FM using the most relevant cognitive methods commonly employed for demonstrating attentional biases—such as the emotional modification of the Stroop task—and relatively few testing the hypothesis of hypervigilance to pain in patients with heterogeneous chronic pain conditions, and these yield contradictory results with regard to the existence of bias for either affect or sensory pain words (or both), and to the mediating role of variables such as anxiety or fear of pain (e.g., Refs. [17], [18], [19], [20] and [21]). The main aims of this study are (1) to test the hypothesis of generalized hypervigilance using the emotional modification of the Stroop task in a sample of FM patients and (2) to explore the possible mediating role of anxiety in the relationship between FM and generalized hypervigilance. For these purposes, we employed words referring to FM symptoms (SF) together with arousing-negative (A−), arousing-positive (A+), and neutral (N) words. In the context of the hypothesis of generalized hypervigilance, we expected FM patients to display an attentional bias not only to SF words, but also to arousing-negative and neutral words. Typically, in a modified Stroop task, the color-naming slows down when words are threatening and relevant to patients, while no response delay is found with neutral words [22]. However, within the context of generalized hypervigilance as a propensity to attend to any task-irrelevant stimuli presented [15] and [16], slowing-down should be especially evident for neutral words, which may need extra processing time because their threatening potential is not obvious to the patient.