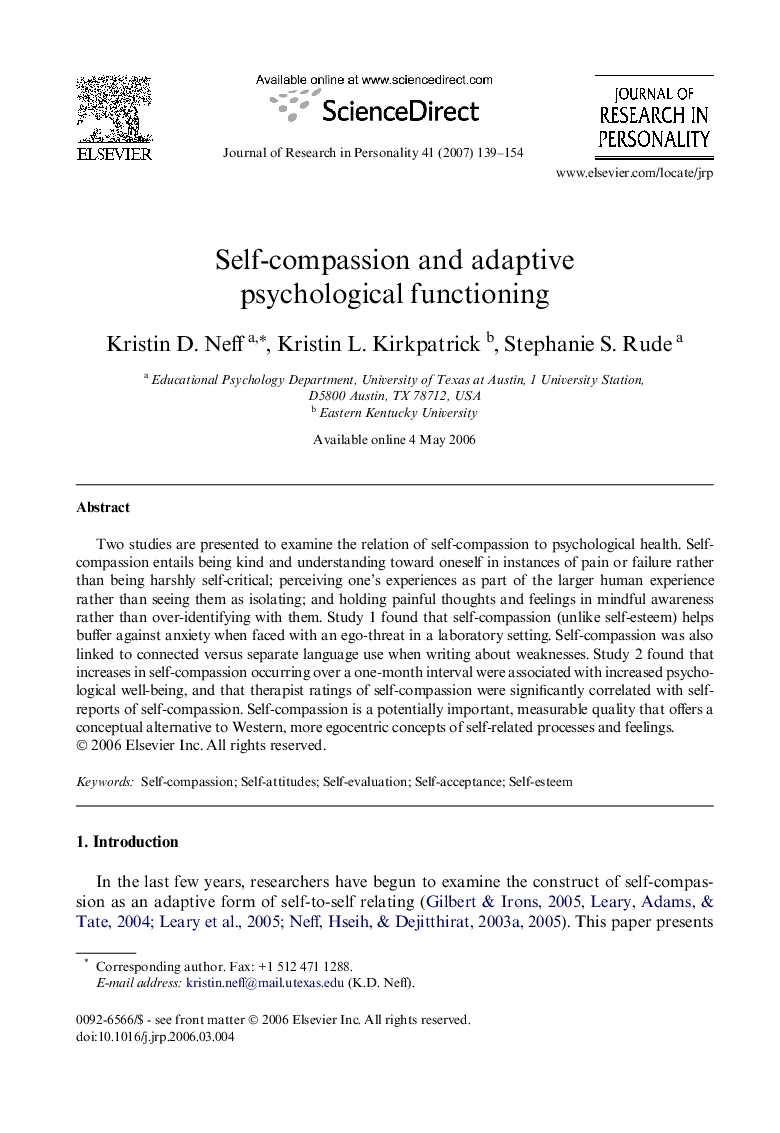 . Introduction In the last few years, researchers have begun to examine the construct of self-compassion as an adaptive form of self-to-self relating (Gilbert and Irons, 2005 and Leary et al., 2005; Neff, 2003a and Neff et al., 2005). This paper presents two studies designed to further investigate the link between self-compassion and well-being. Self-compassion involves being caring and compassionate towards oneself in the face of hardship or perceived inadequacy (Bennett-Goleman, 2001, Brach, 2003, Hanh, 1997, Kornfield, 1993 and Salzberg, 1997). Neff, 2003a and Neff, 2003b has defined self-compassion as being composed of three main components: self-kindness versus self-judgment, common humanity versus isolation, and mindfulness versus over-identification. If individuals are self-compassionate when confronting suffering, inadequacy or failure, it means that they offer themselves warmth and non-judgmental understanding rather than belittling their pain or berating themselves with self-criticism. This process also involves recognizing that being imperfect, making mistakes, and encountering life difficulties is part of the shared human experience—something that we all go through rather than being something that happens to “me” alone. Self-compassion requires taking a balanced approach to one’s negative experiences so that painful feelings are neither suppressed nor exaggerated. One cannot be compassionate towards feelings that are repressed and unacknowledged, but self-compassion quickly turns into melodrama when one is so carried away by negative emotions that all perspective is lost. Instead, self-compassion involves having the right amount of distance from one’s emotions so that they are fully experienced while being approached with mindful objectivity (see Neff, 2003b for an in-depth theoretical overview). The self-compassion construct provides an appealing alternative to the more familiar concept of self-esteem. Although psychologists extolled the benefits of self-esteem for decades, recent research has exposed potential costs associated with the pursuit of high self-esteem (Crocker & Park, 2004), including narcissism (Bushman & Baumeister, 1998), distorted self-perceptions (Sedikides, 1993), prejudice (Aberson, Healy, & Romero, 2000), and violence toward those who threaten the ego (Baumeister, Smart, & Boden, 1996). Self-compassion should confer many of the same benefits as self-esteem in that it provides positive self-affect and a strong sense of self-acceptance. However, these feelings are not based on performance evaluations of the self or comparisons with others. Rather, they stem from recognizing the flawed nature of the human condition, so that the self can be seen clearly and extended kindness without the need to put others down or puff the self up. Gilbert (2005) suggests that self-compassion enhances well-being because it helps individuals to feel cared for, connected, and emotionally calm. Using social mentality theory (Gilbert, 1989)—which draws on principles of evolutionary biology, neurobiology, and attachment theory—he proposes that self-compassion deactivates the threat system (associated with feelings of insecurity, defensiveness and the limbic system) and activates the self-soothing system (associated with feelings of secure attachment, safeness, and the oxytocin–opiate system). In contrast, self-esteem is viewed as an evaluation of superiority/inferiority that helps to establish social rank stability and is related to alerting, energizing impulses and dopamine activation (Gilbert & Irons, 2005). The self-soothing qualities of self-compassion are thought to engender greater capacities for intimacy, effective affect regulation, exploration and successful coping with the environment (Gilbert, 1989 and Gilbert, 2005). Neff (2003a) recently developed the Self-Compassion Scale (SCS) to measure the main components of self-compassion. Initial studies designed to evaluate the SCS (Neff, 2003a) indicated that it exhibits an appropriate factor structure, has good internal and test–retest reliability, shows no significant correlation with social desirability bias, and displays both convergent and discriminant validity. Findings indicated that self-compassion was strongly related to psychological health: higher scores on the SCS were negatively associated with self-criticism, depression, anxiety, rumination, thought suppression, and neurotic perfectionism, and positively associated with life-satisfaction, social connectedness, and emotional intelligence. Neff, Hseih, and Dejitthirat (2005) recently examined the link between self-compassion and academic achievement goals among college students, to determine whether self-compassion might be adaptive in academic contexts. Self-compassion was positively associated with mastery goals, which involve the joy of learning for its own sake, and negatively associated with performance goals, which involve defending or enhancing one’s sense of self-worth through academic performances. These findings were replicated with students who had recently failed a midterm exam, and they further indicated that self-compassionate students exhibited more adaptive ways of coping with failure. A recent study by Shapiro, Astin, Bishop, and Cordova (2005) examined whether participation in a Mindfulness-Based Stress Reduction (MBSR) course would increase self-compassion levels. MBSR is a widely implemented program aimed at the management of stress (Kabat-Zinn, 1982 and Kabat-Zinn, 2003), and has been shown to be highly effective in reducing stress and its associated symptoms (see Grossman, Niemann, & Schmidt, 2004 for a meta-analysis). Although the training program primarily focuses on mindfulness skills, it also teaches meditation practices aimed at developing compassion for self and others. Shapiro and colleagues found that participation in a six-week MBSR course by health care professionals significantly increased participants’ self-compassion levels (as measured by the SCS), and that self-compassion mediated reductions in stress associated with the program. Although the small amount of research conducted with the SCS is encouraging, more work needs to be done to explore the relation of self-compassion to psychological functioning. The two studies presented here were designed to further this aim. The first study investigated the ability of self-compassion to protect against anxiety when one is faced with an ego threat, and compared the protective qualities of self-compassion and self-esteem. The second examined whether changes in self-compassion levels were associated with increased psychological well-being after participation in a relevant therapeutic exercise.