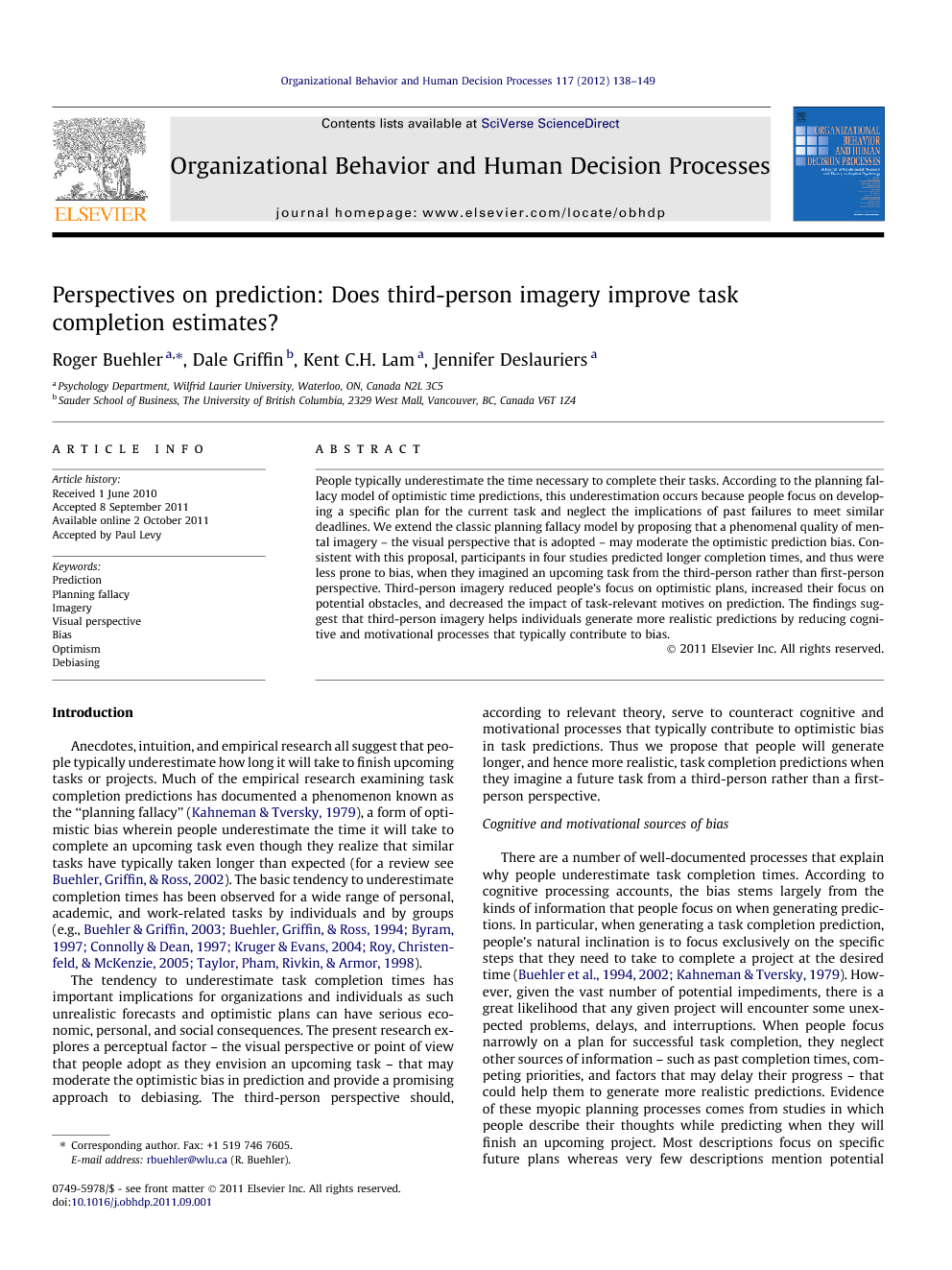 People typically underestimate the time necessary to complete their tasks. According to the planning fallacy model of optimistic time predictions, this underestimation occurs because people focus on developing a specific plan for the current task and neglect the implications of past failures to meet similar deadlines. We extend the classic planning fallacy model by proposing that a phenomenal quality of mental imagery – the visual perspective that is adopted – may moderate the optimistic prediction bias. Consistent with this proposal, participants in four studies predicted longer completion times, and thus were less prone to bias, when they imagined an upcoming task from the third-person rather than first-person perspective. Third-person imagery reduced people’s focus on optimistic plans, increased their focus on potential obstacles, and decreased the impact of task-relevant motives on prediction. The findings suggest that third-person imagery helps individuals generate more realistic predictions by reducing cognitive and motivational processes that typically contribute to bias.

Anecdotes, intuition, and empirical research all suggest that people typically underestimate how long it will take to finish upcoming tasks or projects. Much of the empirical research examining task completion predictions has documented a phenomenon known as the “planning fallacy” (Kahneman & Tversky, 1979), a form of optimistic bias wherein people underestimate the time it will take to complete an upcoming task even though they realize that similar tasks have typically taken longer than expected (for a review see Buehler, Griffin, & Ross, 2002). The basic tendency to underestimate completion times has been observed for a wide range of personal, academic, and work-related tasks by individuals and by groups (e.g., Buehler and Griffin, 2003, Buehler et al., 1994, Byram, 1997, Connolly and Dean, 1997, Kruger and Evans, 2004, Roy et al., 2005 and Taylor et al., 1998). The tendency to underestimate task completion times has important implications for organizations and individuals as such unrealistic forecasts and optimistic plans can have serious economic, personal, and social consequences. The present research explores a perceptual factor – the visual perspective or point of view that people adopt as they envision an upcoming task – that may moderate the optimistic bias in prediction and provide a promising approach to debiasing. The third-person perspective should, according to relevant theory, serve to counteract cognitive and motivational processes that typically contribute to optimistic bias in task predictions. Thus we propose that people will generate longer, and hence more realistic, task completion predictions when they imagine a future task from a third-person rather than a first-person perspective.