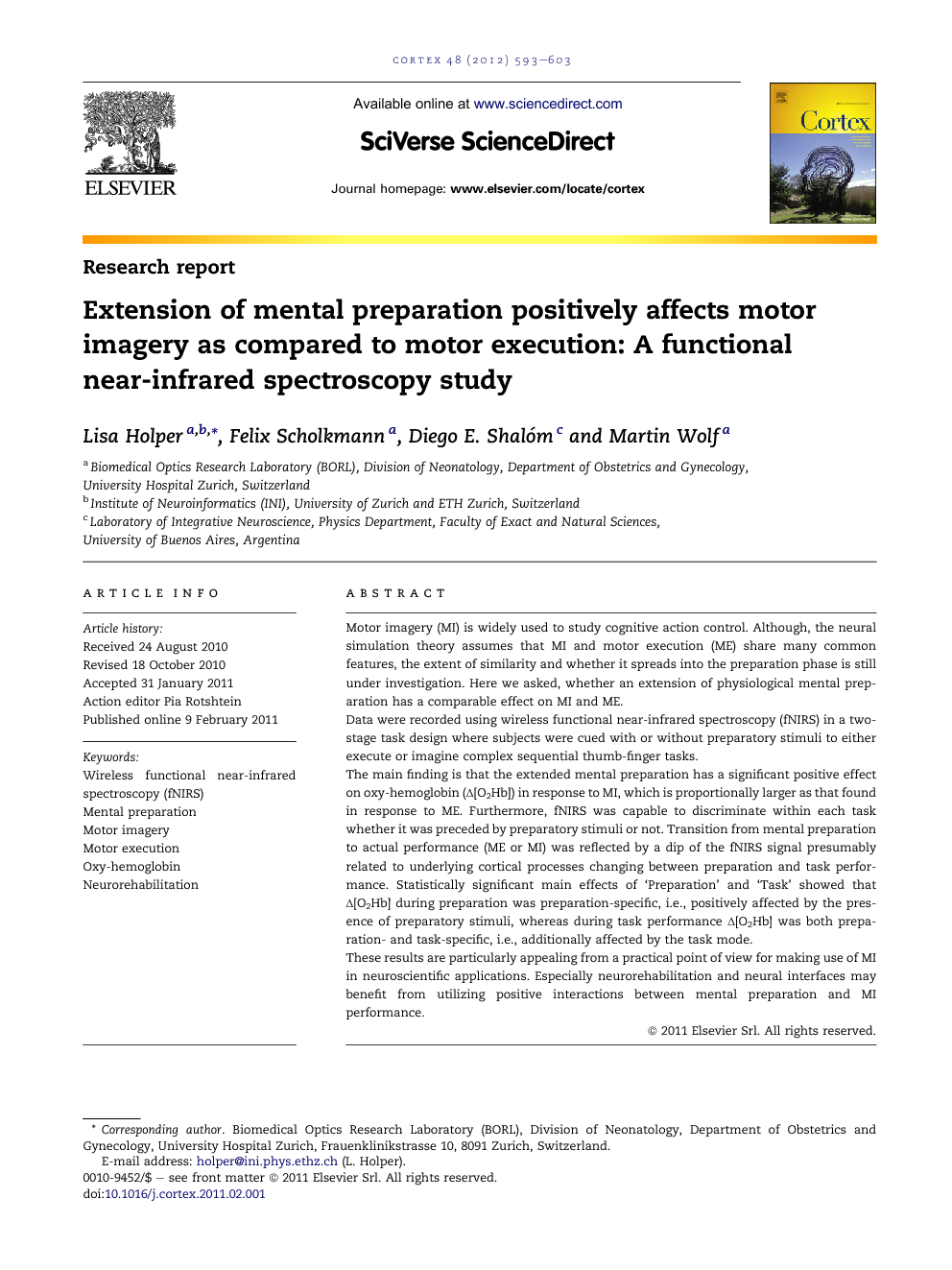 Motor imagery (MI) is widely used to study cognitive action control. Although, the neural simulation theory assumes that MI and motor execution (ME) share many common features, the extent of similarity and whether it spreads into the preparation phase is still under investigation. Here we asked, whether an extension of physiological mental preparation has a comparable effect on MI and ME. Data were recorded using wireless functional near-infrared spectroscopy (fNIRS) in a two-stage task design where subjects were cued with or without preparatory stimuli to either execute or imagine complex sequential thumb-finger tasks. The main finding is that the extended mental preparation has a significant positive effect on oxy-hemoglobin (∆[O2Hb]) in response to MI, which is proportionally larger as that found in response to ME. Furthermore, fNIRS was capable to discriminate within each task whether it was preceded by preparatory stimuli or not. Transition from mental preparation to actual performance (ME or MI) was reflected by a dip of the fNIRS signal presumably related to underlying cortical processes changing between preparation and task performance. Statistically significant main effects of ‘Preparation’ and ‘Task’ showed that ∆[O2Hb] during preparation was preparation-specific, i.e., positively affected by the presence of preparatory stimuli, whereas during task performance ∆[O2Hb] was both preparation- and task-specific, i.e., additionally affected by the task mode. These results are particularly appealing from a practical point of view for making use of MI in neuroscientific applications. Especially neurorehabilitation and neural interfaces may benefit from utilizing positive interactions between mental preparation and MI performance.

MI has been described as the mental rehearsal of voluntary movement (Jeannerod, 2001). According to the so-called simulation hypothesis (Rizzolatti et al., 2001 and Jeannerod, 1994), MI activates a cortical network located in primary motor cortex (M1) and secondary motor areas, such as premotor cortex (PMC), supplementary motor area (SMA) and parietal cortices (Fadiga et al., 1995) which is thought to overlap with that responsible for the actual execution of the same motor action (Decety, 1996a and Lotze et al., 1999). Likewise motor execution (ME), it is suggested, that the cognitive processes underlying MI comprise two consecutive phases (Cunnington et al., 2005 and Thoenissen et al., 2002). While the first phase consists of mental preparation to set up planning for a given task, the second phase involves the actual performance of the task, e.g., execution or imagery. Though extensive evidence has been provided that MI and ME share many common features (Decety, 1996b), the extent of similarity and whether it spreads into the mental preparation phase has only recently attracted the attention of researchers.