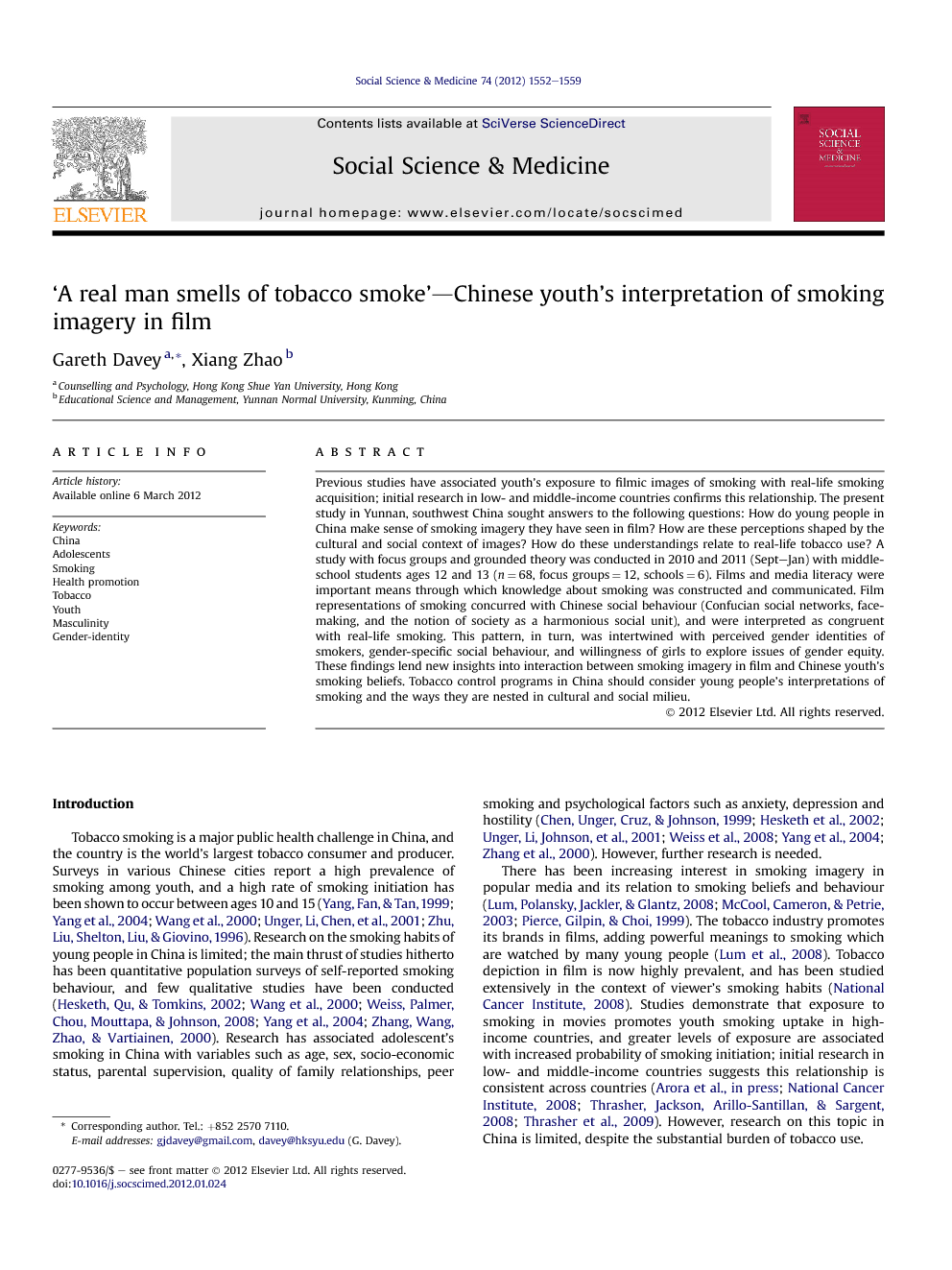 Previous studies have associated youth's exposure to filmic images of smoking with real-life smoking acquisition; initial research in low- and middle-income countries confirms this relationship. The present study in Yunnan, southwest China sought answers to the following questions: How do young people in China make sense of smoking imagery they have seen in film? How are these perceptions shaped by the cultural and social context of images? How do these understandings relate to real-life tobacco use? A study with focus groups and grounded theory was conducted in 2010 and 2011 (Sept–Jan) with middle-school students ages 12 and 13 (n = 68, focus groups = 12, schools = 6). Films and media literacy were important means through which knowledge about smoking was constructed and communicated. Film representations of smoking concurred with Chinese social behaviour (Confucian social networks, face-making, and the notion of society as a harmonious social unit), and were interpreted as congruent with real-life smoking. This pattern, in turn, was intertwined with perceived gender identities of smokers, gender-specific social behaviour, and willingness of girls to explore issues of gender equity. These findings lend new insights into interaction between smoking imagery in film and Chinese youth's smoking beliefs. Tobacco control programs in China should consider young people's interpretations of smoking and the ways they are nested in cultural and social milieu.

This section begins with an outline of the grounded theory, followed by an in-depth description of each category embedded within an analytic narrative. Five concepts were categorised: (1) Social norms of smoking, which represent tobacco consumption in film as prevalent, normal and realistic; (2) Stereotypes of smokers, which characterise personal traits commonly associated with smokers in film; (3) Smoking and authority, which describes the participants' interpretation of smoking imagery as resistance and submission to authority; (4) Images of stress, which associate smoking imagery with characterisations of stress, particularly mediation of stressful situations; and (5) Smoking as social harmony, the core category, which represents a framework of cultural and social factors which wed together the other categories. Collectively, these categories comprise a preliminary model, and are described below as group- and individual-mediated responses. Appraisals of smokers in film were not patterned much by participants' demographic and socio-economic differences; therefore, all quotes represent the broader consensus unless described as otherwise.