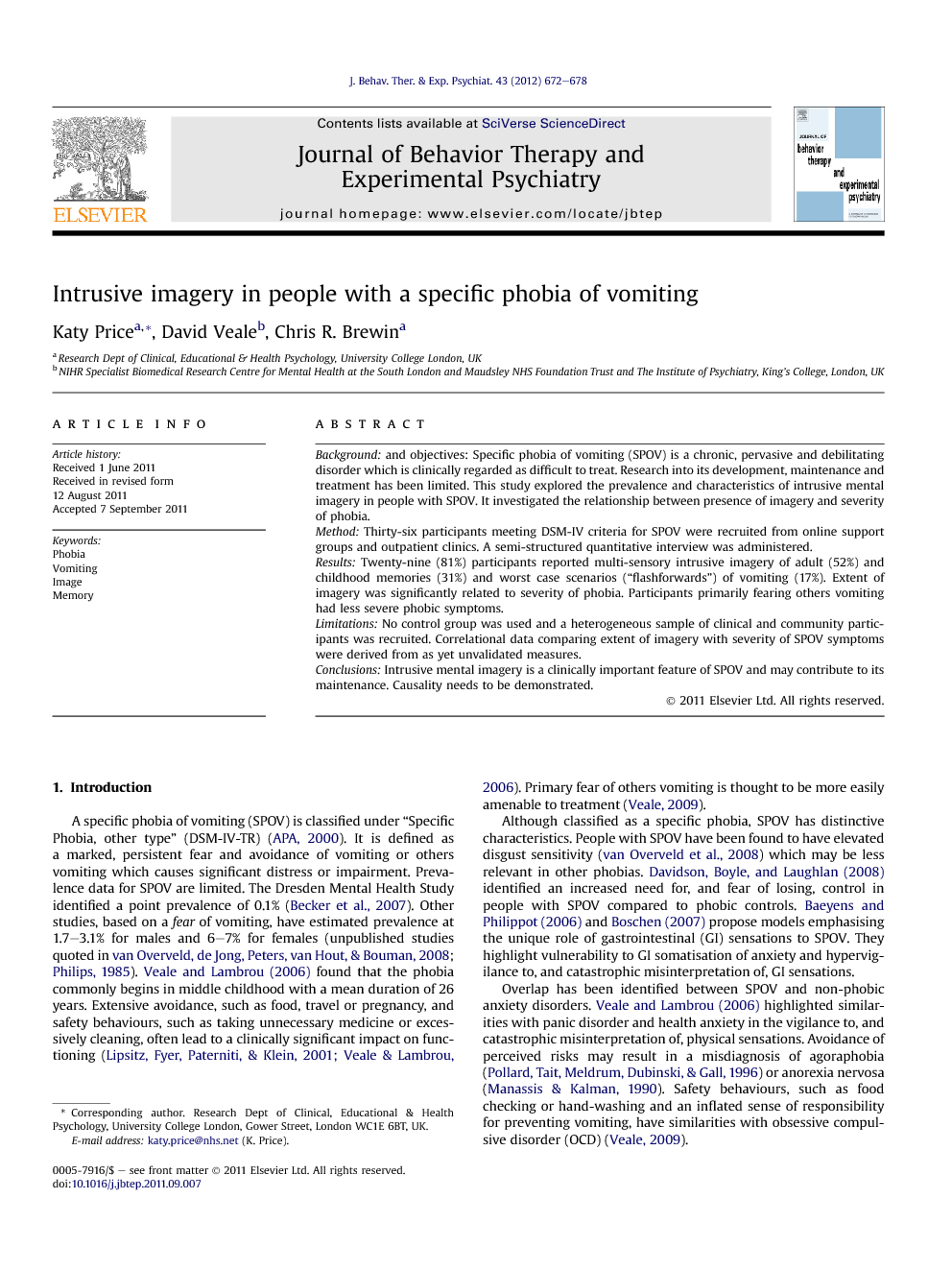 Background and objectives: Specific phobia of vomiting (SPOV) is a chronic, pervasive and debilitating disorder which is clinically regarded as difficult to treat. Research into its development, maintenance and treatment has been limited. This study explored the prevalence and characteristics of intrusive mental imagery in people with SPOV. It investigated the relationship between presence of imagery and severity of phobia. Method Thirty-six participants meeting DSM-IV criteria for SPOV were recruited from online support groups and outpatient clinics. A semi-structured quantitative interview was administered. Results Twenty-nine (81%) participants reported multi-sensory intrusive imagery of adult (52%) and childhood memories (31%) and worst case scenarios (“flashforwards”) of vomiting (17%). Extent of imagery was significantly related to severity of phobia. Participants primarily fearing others vomiting had less severe phobic symptoms. Limitations No control group was used and a heterogeneous sample of clinical and community participants was recruited. Correlational data comparing extent of imagery with severity of SPOV symptoms were derived from as yet unvalidated measures. Conclusions Intrusive mental imagery is a clinically important feature of SPOV and may contribute to its maintenance. Causality needs to be demonstrated. Highlights ► We investigate intrusive imagery in people with a specific phobia of vomiting. ► A majority of participants experience imagery, both memories and worst case scenarios. ► Extent of imagery experienced is significantly correlated with severity of phobia symptoms. ► Participants fearing themselves vomiting have more severe symptoms than those fearing others.

A specific phobia of vomiting (SPOV) is classified under “Specific Phobia, other type” (DSM-IV-TR) (APA, 2000). It is defined as a marked, persistent fear and avoidance of vomiting or others vomiting which causes significant distress or impairment. Prevalence data for SPOV are limited. The Dresden Mental Health Study identified a point prevalence of 0.1% (Becker et al., 2007). Other studies, based on a fear of vomiting, have estimated prevalence at 1.7–3.1% for males and 6–7% for females (unpublished studies quoted in van Overveld, de Jong, Peters, van Hout, & Bouman, 2008; Philips, 1985). Veale and Lambrou (2006) found that the phobia commonly begins in middle childhood with a mean duration of 26 years. Extensive avoidance, such as food, travel or pregnancy, and safety behaviours, such as taking unnecessary medicine or excessively cleaning, often lead to a clinically significant impact on functioning ( Lipsitz et al., 2001 and Veale and Lambrou, 2006). Primary fear of others vomiting is thought to be more easily amenable to treatment ( Veale, 2009). Although classified as a specific phobia, SPOV has distinctive characteristics. People with SPOV have been found to have elevated disgust sensitivity (van Overveld et al., 2008) which may be less relevant in other phobias. Davidson, Boyle, and Laughlan (2008) identified an increased need for, and fear of losing, control in people with SPOV compared to phobic controls. Baeyens and Philippot (2006) and Boschen (2007) propose models emphasising the unique role of gastrointestinal (GI) sensations to SPOV. They highlight vulnerability to GI somatisation of anxiety and hypervigilance to, and catastrophic misinterpretation of, GI sensations. Overlap has been identified between SPOV and non-phobic anxiety disorders. Veale and Lambrou (2006) highlighted similarities with panic disorder and health anxiety in the vigilance to, and catastrophic misinterpretation of, physical sensations. Avoidance of perceived risks may result in a misdiagnosis of agoraphobia (Pollard, Tait, Meldrum, Dubinski, & Gall, 1996) or anorexia nervosa (Manassis & Kalman, 1990). Safety behaviours, such as food checking or hand-washing and an inflated sense of responsibility for preventing vomiting, have similarities with obsessive compulsive disorder (OCD) (Veale, 2009). Veale (2009) has proposed a cognitive-behavioural maintenance model for a SPOV. He identifies a core cycle of imagery, nausea, catastrophic beliefs and anxiety. This is further maintained by self-focused attention, hypervigilance, worry and reassurance, avoidance and safety behaviours. With respect to imagery, Veale highlights the role of aversive memories in strengthening the belief that vomiting inevitably follows nausea through conditioned association. Images of imagined scenarios may strengthen beliefs about likelihood of vomiting. Although Veale suggests that imagery is central to its maintenance, it has not, to date, been empirically demonstrated in SPOV. Images are defined as “contents of consciousness that possess sensory qualities as opposed to those that are purely verbal or abstract” (Hackmann, 1998). Imagery has been shown to have greater emotional potency than verbal processing alone (Holmes and Mathews, 2005 and Holmes et al., 2006). A review of the imagery literature (Brewin, Gregory, Lipton, & Burgess, 2010) conceptualises images on a spectrum from fully autobiographical memories to hypothetical situations. Images are defined as intrusive when they spontaneously come to mind without voluntary retrieval (Brewin et al., 2010). Brewin et al. (2010) highlight that intrusions of memories and of imagined scenarios share not only content and characteristics, but also the neural mechanisms involved in their generation. In this paper “imagery” encompasses both intrusive memories (defined as full autobiographical memories) and intrusive imagined scenarios. Mental imagery has been explored in anxiety disorders such as social phobia (Hackmann, Clark, & McManus, 2000), agoraphobia (Day, Holmes, & Hackmann, 2004), health anxiety (Muse, McManus, Hackmann, Williams, & Williams, 2010) and body dysmorphic disorder (BDD) (Osman, Cooper, Hackmann, & Veale, 2004). Within specific phobias, mental imagery has been explored in snake (Hunt et al., 2006) and spider phobia (Pratt, Cooper, & Hackmann, 2004). Speckens, Hackmann, Ehlers, and Cuthbert (2007) found that presence of imagery was related to symptom severity in OCD. Intrusive images have been demonstrated in the maintenance of depression (Brewin, Reynolds, & Tata, 1999) and social phobia (Hirsch, Clark, Mathews, & Williams, 2003). The unique nature of SPOV means that imagery may differ from that in other disorders. The role of GI symptoms (Baeyens & Philippot, 2006) and aversive experiences of vomiting (Veale, 2009) may mean that physical sensations are more likely to be present in imagery. The disgust sensitivity indicated in SPOV (van Overveld et al., 2008) may mean that taste and smell may play a more prominent role. Imagery about vomiting may also be linked to increased disgust. Perspective of imagery is less likely to be from an observer perspective than in disorders where social evaluation is the primary fear (Veale & Lambrou, 2006). Veale’s (2009) prioritisation of aversive memories suggests that these may play a particularly key role in SPOV imagery. Veale’s (2009) suggestion that those who primarily fear others vomiting may be more easily treated indicates that this group may differ in severity from those primarily fearing self vomiting. This study sought to investigate the presence and characteristics of mental imagery in phobia of vomiting. It aimed to identify the proportion of people with phobia of vomiting that experienced intrusive mental imagery. We hypothesised that, in line with Veale’s (2009) model, a significant majority of participants would experience intrusive imagery. Secondly, it aimed to explore the nature of the imagery experienced by people with SPOV. We hypothesised that physical sensations, taste and smell may be more prominent than in other disorders. Also, that aversive memories would be likely to predominate over imagined scenarios. In addition, we hypothesised that disgust would be likely to be a feature of images. Thirdly, the study aimed to investigate whether the presence of intrusive imagery was related to severity of SPOV symptoms and to levels of disgust. Veale’s (2009) model identifies imagery as a central maintaining factor. We therefore hypothesised that the presence of imagery would increase severity of symptoms and disgust. As a further aim, the study sought to investigate the hypothesis that SPOV symptoms and frequency of imagery would be greater in those primarily fearing self vomiting than those fearing others vomiting.

This study supports Veale’s (2009) proposal that imagery is present for a majority of people with SPOV when they are anxious. It also shows that presence of imagery may be associated with severity of SPOV. Further research is needed to demonstrate causality. These findings reinforce the importance of considering the presence of imagery during clinical assessment and treatment of SPOV. The presence of multi-modal imagery strengthens the importance of enquiring about physical, taste and olfactory aspects of images in addition to visual aspects. As well as playing a possible role in maintenance, imagery is a possible target for treatment of SPOV. Imagery rescripting has been shown to reduce symptoms in social phobia (Wild et al., 2007 and Wild et al., 2008), snake phobia (Hunt & Fenton, 2007) and depression (Brewin et al., 2009 and Wheatley et al., 2007). Veale (2009) highlights the clinical utility of supplementing graded in vivo exposure with imaginal exposure and imagery rescripting. Aside from case studies, there is currently no treatment research in SPOV. A robust treatment trial of the effectiveness of CBT for SPOV, incorporating elements of imagery rescripting, would significantly add to our understanding about treatment for this debilitating disorder.