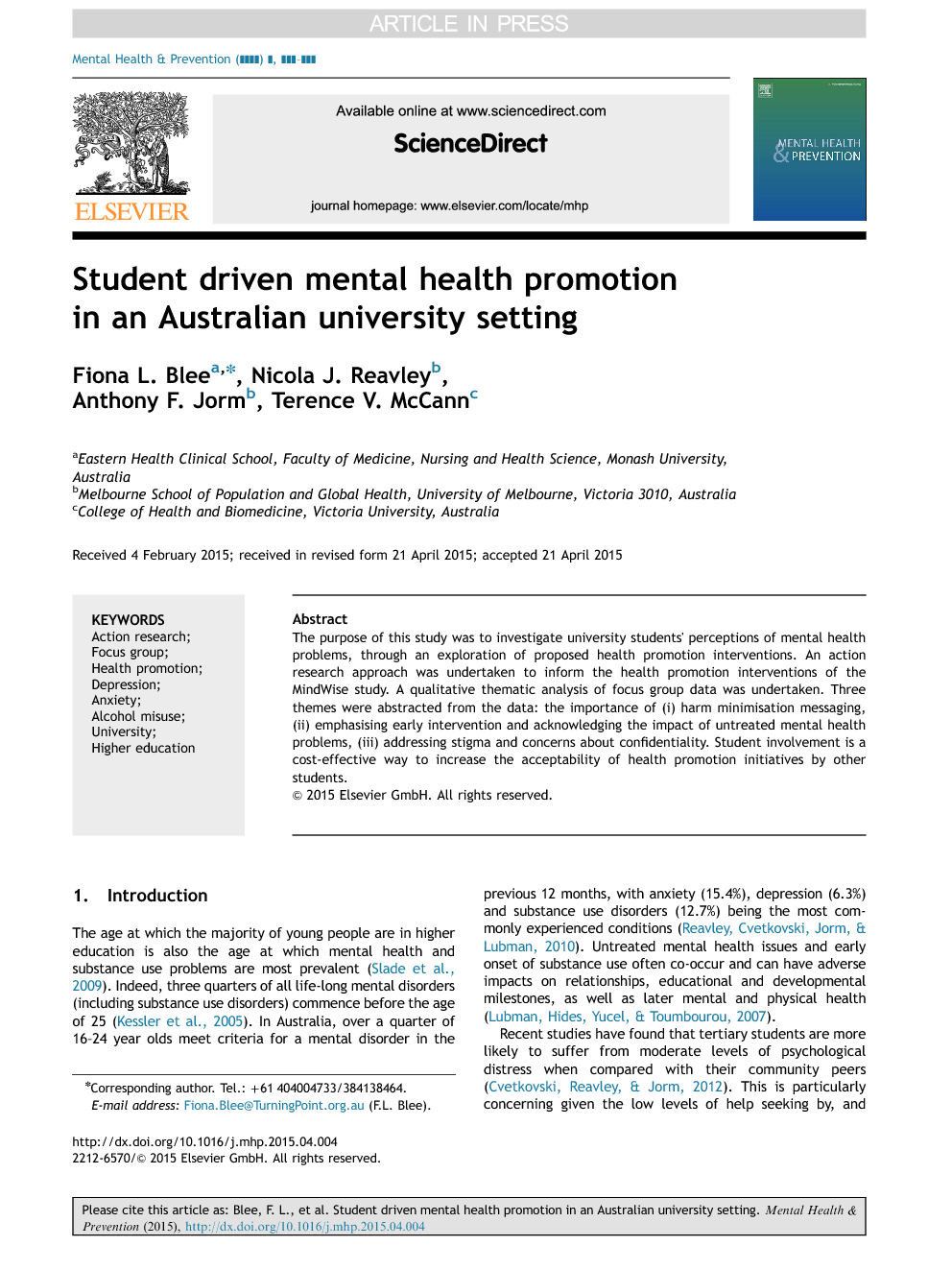 The purpose of this study was to investigate university students׳ perceptions of mental health problems, through an exploration of proposed health promotion interventions. An action research approach was undertaken to inform the health promotion interventions of the MindWise study. A qualitative thematic analysis of focus group data was undertaken. Three themes were abstracted from the data: the importance of (i) harm minimisation messaging, (ii) emphasising early intervention and acknowledging the impact of untreated mental health problems, (iii) addressing stigma and concerns about confidentiality. Student involvement is a cost-effective way to increase the acceptability of health promotion initiatives by other students.

The age at which the majority of young people are in higher education is also the age at which mental health and substance use problems are most prevalent (Slade et al., 2009). Indeed, three quarters of all life-long mental disorders (including substance use disorders) commence before the age of 25 (Kessler et al., 2005). In Australia, over a quarter of 16–24 year olds meet criteria for a mental disorder in the previous 12 months, with anxiety (15.4%), depression (6.3%) and substance use disorders (12.7%) being the most commonly experienced conditions (Reavley, Cvetkovski, Jorm, & Lubman, 2010). Untreated mental health issues and early onset of substance use often co-occur and can have adverse impacts on relationships, educational and developmental milestones, as well as later mental and physical health (Lubman, Hides, Yucel, & Toumbourou, 2007). Recent studies have found that tertiary students are more likely to suffer from moderate levels of psychological distress when compared with their community peers (Cvetkovski, Reavley, & Jorm, 2012). This is particularly concerning given the low levels of help seeking by, and subsequent treatment for, students (Leahy et al., 2010). This high prevalence of psychological distress amongst students and low levels of help seeking mirrors the situation reported in the United States and is in contrast to one longitudinally designed German university based study, where lowered levels of psychological distress amongst students has been reported (Berger et al., 2015 and Hunt and Eisenberg, 2010). The low level of treatment of mental health and substance use problems persists despite the availability of free counselling services across Australian universities and the more general availability to the Australian public of subsidised psychological and psychiatric services under the national health insurance scheme, Medicare (Pirkis, Harris, Hall, & Ftanou, 2011). In addition, the importance of early intervention for mental health problems has received significant attention in Australia in recent years and has led to significant investment into the youth-friendly ‘headspace’ mental health services, which are aimed at the 12–25 year old age group (Muir et al., 2009). However, it has been argued that increases in services are not enough to improve Australia׳s mental health and that a greater focus on the prevention of mental disorders is also necessary (Reavley & Jorm, 2014). While participating in higher education is generally considered protective in terms of physical health, a significant number of students experience mental health problems around this time (Andrews & Wilding, 2004). With over 50% of young people in Australia aged 18–20 years in tertiary education, higher education institutions are key settings to run health promotion programs (Birrell & Edwards, 2007). Several factors support help seeking for mental health problems, one of which is mental health literacy (Reavley, McCann, & Jorm, 2012). Mental health literacy is defined as ‘knowledge and beliefs which aid in the prevention, recognition or management of mental illness’ (Jorm & Korten, 1997, p. 182). A benefit of higher education institutions investing in improving student mental health literacy is it is likely to minimise negative educational outcomes such as absenteeism and course drop-out (Casey, 2007). A number of mental health promotion interventions have been carried out in high schools, but few have focused on prevention of, and early intervention with, anxiety and depression in higher education students (Cuijpers et al., 2006, Patton et al., 2000 and Reavley and Jorm, 2010). The ‘MindWise’ mental health literacy intervention study endeavoured to investigate whether a multifaceted intervention could improve help seeking for mental health problems, mental health first-aid behaviours, and levels of psychological distress in a higher education setting. Briefly, the study was a cluster randomized trial across nine campuses of Victoria University in Melbourne, Australia. Mental health literacy was promoted at the six intervention sites using a wide range of interventions, including Mental Health First Aid courses on campus, social marketing projects and students-as-staff placements. Three other campuses were matched as control sites. A monitoring sample, comprising 774 students and 422 staff (at baseline) was interviewed at three time points – before, during and after the project – in order to assess the effectiveness of the intervention elements (Reavley & Jorm, 2010). Briefly, the findings for students indicated that recall of intervention elements was greater in the intervention group at the end of Year 2 of the project (Reavley, McCann, Cvetkovski, & Jorm, 2014). Students in the intervention group were more likely to say they would seek help from a drug and alcohol centre for alcohol problems at the end of 6 months. However, there were no effects on psychological distress or alcohol use. The findings for staff also showed that recall of the intervention elements was greater in the intervention group at the end of Year 2. Staff in the intervention group also showed better recognition of depression, greater knowledge of guidelines for safe levels of alcohol consumption and greater intention to seek help for alcohol misuse from a general practitioner. However, as with students, there were no effects on psychological distress or alcohol use. In this paper, we report the findings of a focus group of students that informed the intervention arm of the cluster randomized trial. Students discussed various methods of mental health related education and prevention activities they believed would be effective in higher and vocational education settings.

With more a sizeable proportion of young people continuing into higher education, universities are ideally placed to promote mental health. Universities need to look beyond the traditional offerings of counselling services, and consider what can be done to create a mentally healthy study space for students. The importance of student involvement in the development of health promotion initiatives cannot be underestimated. In the case of the MindWise project, student involvement brought energy and specificity to the work and ensured that the initiatives were appropriate to the people they were intended to influence. Students׳ suggestions about how health promotion staff should tackle mental health promotion were broad ranging and considered; however, they tended to emphasise the provision of information rather than population-oriented interventions or preventative actions. Further research is needed to add to the limited evidence-base about the effectiveness of whole-of-population interventions and student driven initiatives that aim to improve mental health.