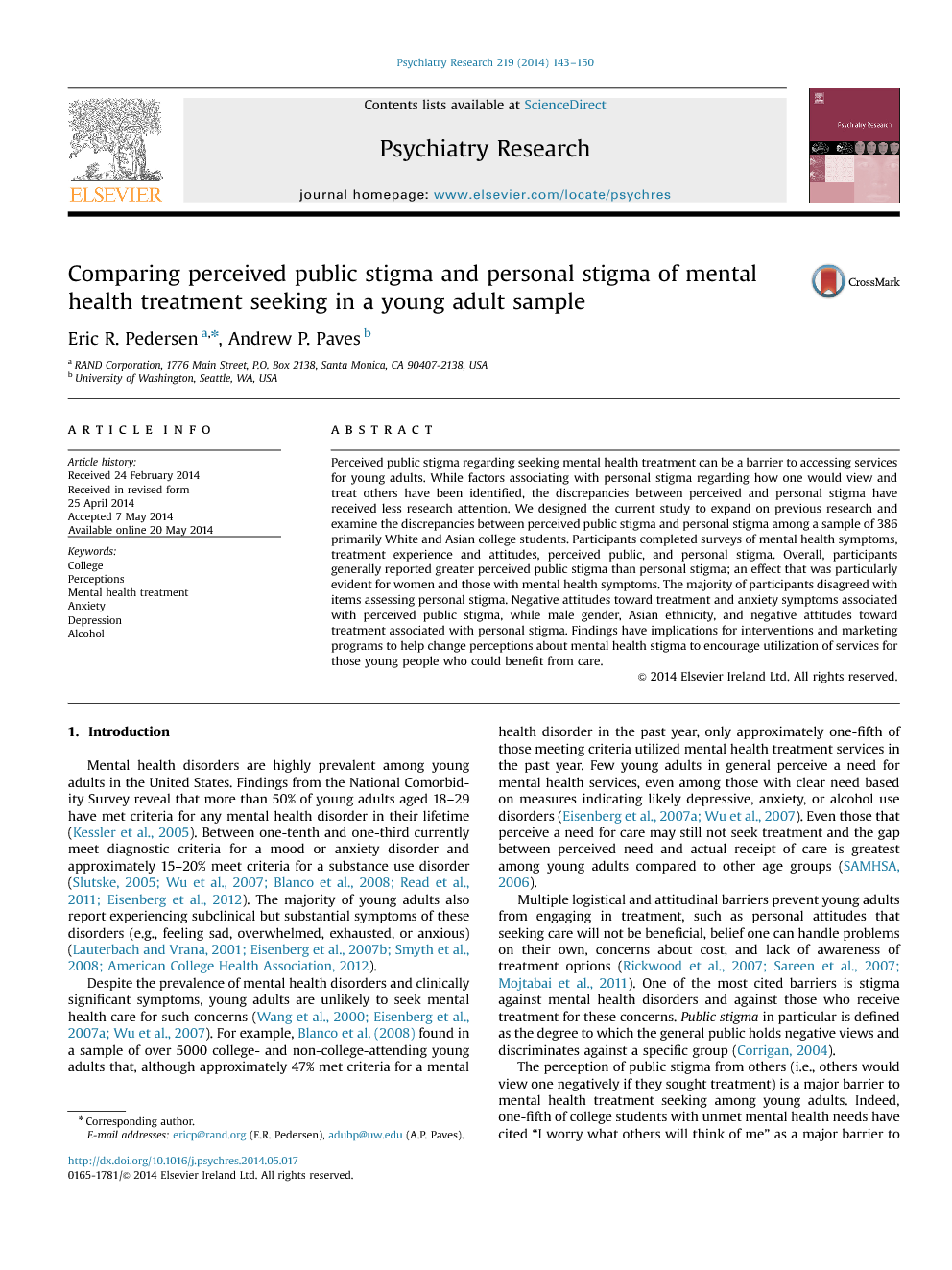 Mental health disorders are highly prevalent among young adults in the United States. Findings from the National Comorbidity Survey reveal that more than 50% of young adults aged 18–29 have met criteria for any mental health disorder in their lifetime (Kessler et al., 2005). Between one-tenth and one-third currently meet diagnostic criteria for a mood or anxiety disorder and approximately 15–20% meet criteria for a substance use disorder (Slutske, 2005, Wu et al., 2007, Blanco et al., 2008, Read et al., 2011 and Eisenberg et al., 2012). The majority of young adults also report experiencing subclinical but substantial symptoms of these disorders (e.g., feeling sad, overwhelmed, exhausted, or anxious) (Lauterbach and Vrana, 2001, Eisenberg et al., 2007b, Smyth et al., 2008 and American College Health Association, 2012). Despite the prevalence of mental health disorders and clinically significant symptoms, young adults are unlikely to seek mental health care for such concerns (Wang et al., 2000, Eisenberg et al., 2007a and Wu et al., 2007). For example, Blanco et al. (2008) found in a sample of over 5000 college- and non-college-attending young adults that, although approximately 47% met criteria for a mental health disorder in the past year, only approximately one-fifth of those meeting criteria utilized mental health treatment services in the past year. Few young adults in general perceive a need for mental health services, even among those with clear need based on measures indicating likely depressive, anxiety, or alcohol use disorders (Eisenberg et al., 2007a and Wu et al., 2007). Even those that perceive a need for care may still not seek treatment and the gap between perceived need and actual receipt of care is greatest among young adults compared to other age groups (SAMHSA, 2006). Multiple logistical and attitudinal barriers prevent young adults from engaging in treatment, such as personal attitudes that seeking care will not be beneficial, belief one can handle problems on their own, concerns about cost, and lack of awareness of treatment options (Rickwood et al., 2007, Sareen et al., 2007 and Mojtabai et al., 2011). One of the most cited barriers is stigma against mental health disorders and against those who receive treatment for these concerns. Public stigma in particular is defined as the degree to which the general public holds negative views and discriminates against a specific group ( Corrigan, 2004). The perception of public stigma from others (i.e., others would view one negatively if they sought treatment) is a major barrier to mental health treatment seeking among young adults. Indeed, one-fifth of college students with unmet mental health needs have cited “I worry what others will think of me” as a major barrier to seeking care (Eisenberg et al., 2007a). Data from the National Survey on Drug Use and Health finds that upwards of one-third of individuals report concerns about stigma affected their decision to not seek treatment despite perceiving a need (SAMHSA, 2006; Mason et al., 2013). Findings from the National Cormorbidity Survey replication study reported approximately one-fifth of individuals in mental health care dropped out of treatment due to perceived public stigma (Mojtabai et al., 2011). Not only is perceived stigma a major barrier to treatment seeking (Corrigan, 2004), but it can exacerbate anxiety and depressive symptoms, substance abuse, social isolation, medication non-compliance, and treatment drop-out (Link et al., 1999, Sirey et al., 2001, Britt et al., 2008 and Keyes et al., 2010). Perceived stigma affects initiation and engagement in treatment for individuals beyond the United States as well, suggesting it is a global concern that warrants further attention (Sareen et al., 2007 and Andrade et al., 2013). Few studies have examined the validity of perceived public stigma. That is, while youth may perceive that others would view them negatively if they sought treatment, it is not clear if these perceptions are accurate. One way to test these perceptions is to compare perceived public stigma (i.e., how one thinks others would view and treat them) with personal stigma (i.e., how one actually would view and treat others themselves). For example, Eisenberg et al. (2009) found that the majority of a large sample of college students (65%) agreed that “most people would think less of someone who has received mental health treatment” yet 85% of them disagreed with the statement, “I would think less of someone who has received mental health treatment.” Similar findings have been reported for adolescents and perceived versus actual stigma related to symptoms of depression, with Australian youth reporting greater levels of perceived stigma (e.g., “most people believe that depression is a sign of personal weakness”) compared to personal stigma (e.g., “depression is a sign of personal weakness) (Calear et al., 2011). These findings suggest that young adults may overestimate public stigma against mental health treatment particularly in relation to their own personal stigma attitudes. However, to date no studies have examined perceptions or misperceptions of how the study participants themselves would be treated by the general public for seeking treatment for mental health concerns. Likewise, prior work has not examined what factors (e.g., demographics; mental health symptoms common in college such as anxiety, depression, and heavy alcohol use) influence the degree of misperception between perceived public stigma and actual attitudes toward seeking treatment.