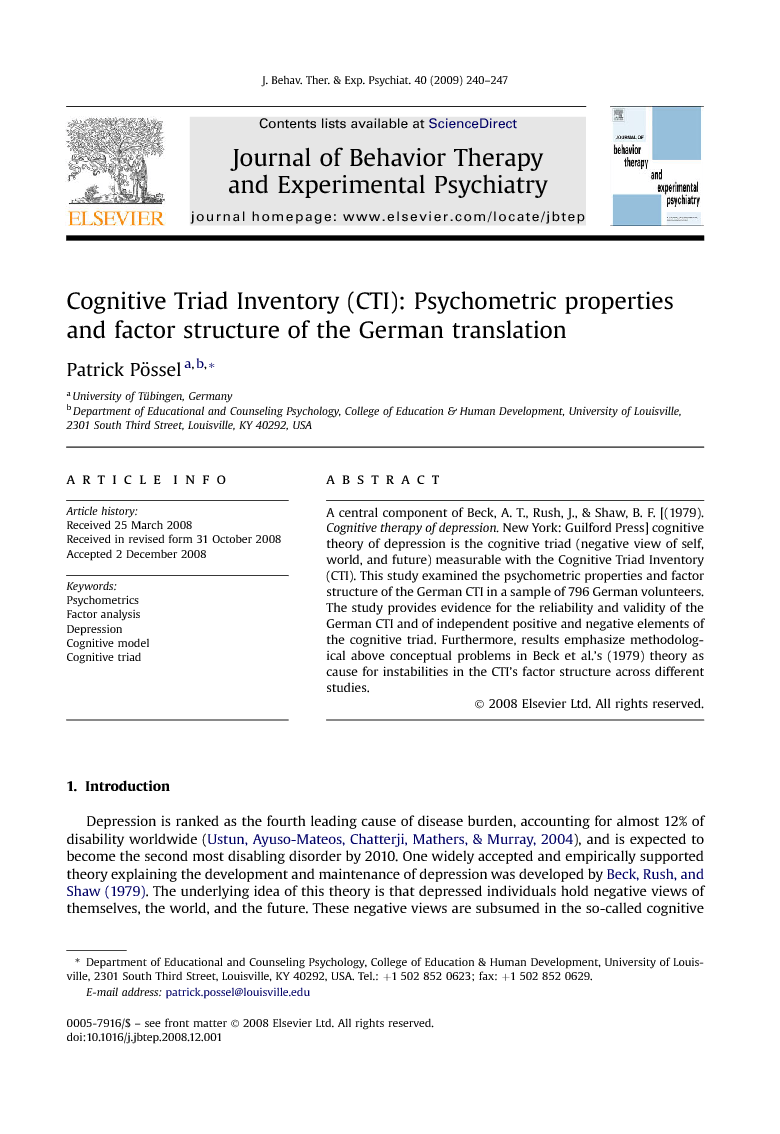 A central component of Beck, A. T., Rush, J., & Shaw, B. F. [(1979). Cognitive therapy of depression. New York: Guilford Press] cognitive theory of depression is the cognitive triad (negative view of self, world, and future) measurable with the Cognitive Triad Inventory (CTI). This study examined the psychometric properties and factor structure of the German CTI in a sample of 796 German volunteers. The study provides evidence for the reliability and validity of the German CTI and of independent positive and negative elements of the cognitive triad. Furthermore, results emphasize methodological above conceptual problems in Beck et al.'s (1979) theory as cause for instabilities in the CTI's factor structure across different studies.

Depression is ranked as the fourth leading cause of disease burden, accounting for almost 12% of disability worldwide (Ustun, Ayuso-Mateos, Chatterji, Mathers, & Murray, 2004), and is expected to become the second most disabling disorder by 2010. One widely accepted and empirically supported theory explaining the development and maintenance of depression was developed by Beck, Rush, and Shaw (1979). The underlying idea of this theory is that depressed individuals hold negative views of themselves, the world, and the future. These negative views are subsumed in the so-called cognitive triad. The role of the cognitive triad in Beck's model is to activate other symptoms of depression. For example, the negative view of the self is believed to lead to an underestimation of the own skills and to low self-esteem in depressed individuals. The cognitive triad has been empirically linked to depression in many studies (for reviews, see Haaga, Dyck, & Ernst, 1991). Despite the significance of the cognitive triad to the development and maintenance of depression, no standardized assessment instrument to measure them has been made available in German thus far. To close this gap, this study translated the widely used Cognitive Triad Inventory (CTI), developed by Beckham, Leber, Watkins, Boyer, and Cook (1986), and evaluated it with a nonclinical German sample. The original American CTI version was studied initially on 54 depressed outpatients (Beckham et al., 1986). Beckham et al. (1986) dropped all items from a first form of the CTI with an item–scale correlation of r < .25 with their own scale or that correlated higher with another subscale. The final version of the American CTI shows good to excellent internal consistencies (α = .91 for view of self, α = .81 for view of world, α = .93 for view of future, α = .95 for total scale), and the CTI total scale correlates with the Beck Depression Inventory (BDI) to r = .77. Moreover, the three CTI scales demonstrate mediate to high inter-correlations (self–world: r = .71, self–future: r = .70, world–future: r = .66; Anderson & Skidmore, 1995). Beckham et al. (1986) constructed the CTI theory-driven and split the inventory in three scales but did not evaluate the structure empirically. Two other studies (Anderson and Skidmore, 1995 and McIntosh and Fischer, 2000) tested the structure of the CTI in nonclinical samples of university students but were both unable to confirm the 3-factor model. The study by McIntosh and Fischer (2000) found only one factor in their analysis. Anderson and Skidmore (1995), however, report positively and negatively phrased items of each scale loaded on separate factors in their factor analysis. Additionally, negatively phrased items of view of self loaded on both the negatively phrased view of world and future factors, creating a 5-factor model. Anderson and Skidmore (1995) conclude that the factorial validity of Beck's model is correct but that in addition item phrasing (negative vs. positive) is significant for the factor structure of the CTI. Therefore, a 6-factor structure seems possible for the CTI. The aims of this study are to translate the CTI, to validate the German CTI version, and to test the quality of the German items and factor structure. Following Beckham et al. (1986), it can be expected that all items demonstrate a correlation with their CTI scale of at least .25 and smaller correlations with all other scales (item–scale correlation). To test the factor structure of the German CTI, confirmatory factor analyses for a 1-factor, 3-factor, a 5-factor, and a 6-factor model of the German CTI will be tested. Internal consistencies of the CTI scales and the total scale as well as the four-week retest-reliabilities will be calculated to identify the reliability of the German CTI version. Finally, criterion validity will be established by calculating Pearson correlations between the German CTI version and the German Center for Epidemiological Studies – Depression Scale (CES-D, Hautzinger & Bailer, 1993) administered at the same time and four weeks later, respectively.