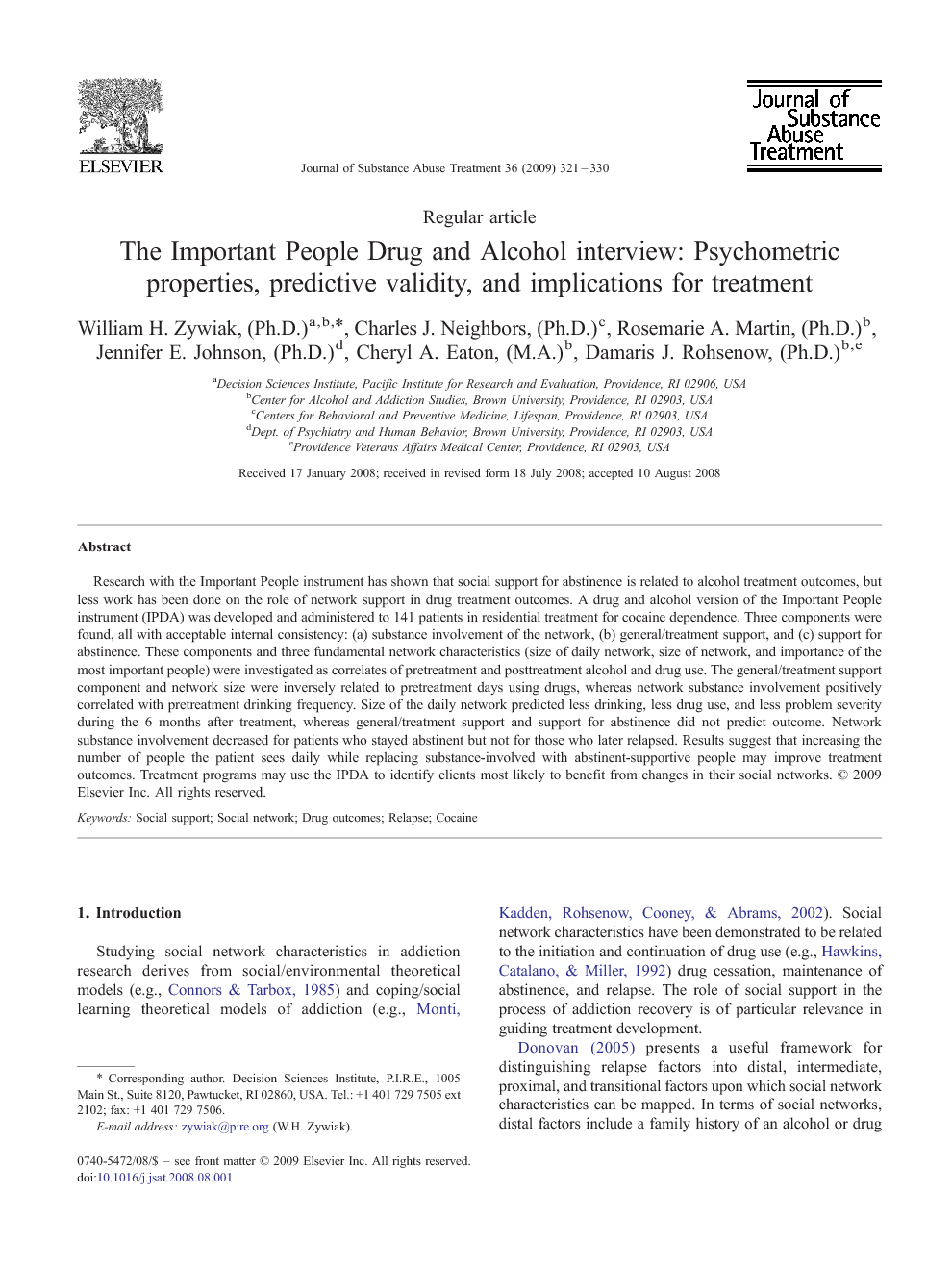 Research with the Important People instrument has shown that social support for abstinence is related to alcohol treatment outcomes, but less work has been done on the role of network support in drug treatment outcomes. A drug and alcohol version of the Important People instrument (IPDA) was developed and administered to 141 patients in residential treatment for cocaine dependence. Three components were found, all with acceptable internal consistency: (a) substance involvement of the network, (b) general/treatment support, and (c) support for abstinence. These components and three fundamental network characteristics (size of daily network, size of network, and importance of the most important people) were investigated as correlates of pretreatment and posttreatment alcohol and drug use. The general/treatment support component and network size were inversely related to pretreatment days using drugs, whereas network substance involvement positively correlated with pretreatment drinking frequency. Size of the daily network predicted less drinking, less drug use, and less problem severity during the 6 months after treatment, whereas general/treatment support and support for abstinence did not predict outcome. Network substance involvement decreased for patients who stayed abstinent but not for those who later relapsed. Results suggest that increasing the number of people the patient sees daily while replacing substance-involved with abstinent-supportive people may improve treatment outcomes. Treatment programs may use the IPDA to identify clients most likely to benefit from changes in their social networks.

Studying social network characteristics in addiction research derives from social/environmental theoretical models (e.g., Connors & Tarbox, 1985) and coping/social learning theoretical models of addiction (e.g., Monti, Kadden, Rohsenow, Cooney, & Abrams, 2002). Social network characteristics have been demonstrated to be related to the initiation and continuation of drug use (e.g., Hawkins, Catalano, & Miller, 1992) drug cessation, maintenance of abstinence, and relapse. The role of social support in the process of addiction recovery is of particular relevance in guiding treatment development. Donovan (2005) presents a useful framework for distinguishing relapse factors into distal, intermediate, proximal, and transitional factors upon which social network characteristics can be mapped. In terms of social networks, distal factors include a family history of an alcohol or drug problem, intermediate factors include social support, proximal factors would include social pressure, and transitional factors include the reaction of the social network to a lapse. Lack of social support has been associated with drinking to cope (Holahan, Moos, Holahan, Cronkite, & Randall, 2004), dropping out of substance use treatment (Dobkin, Civita, Paraherakis, & Gill, 2002), and failure to maintain abstinence after treatment (Hser, Grella, Hsieh, Anglin, & Brown, 1999). Emotional support and functional social support are highly predictive of long-term abstinence from alcohol and/or other drugs (Beattie & Longabaugh, 1999, Havassy et al., 1991, McMahon, 2001 and Witkiewitz & Marlatt, 2004). Poor quality of social support and level of support for abstinence have also been related to relapse (Dobkin et al., 2002 and Brown et al., 1989). In addition, the success of marital and network therapy for alcohol and drug problems (Galanter, 1993 and O'Farrell & Fals-Stewart, 2006) and the proliferation of mutual-support groups across the globe (Makela, 1996) suggest that a variety of social network characteristics may play a critical role in recovery from substance use. Mutual-support groups have been found to increase the likelihood of initiating abstinence while beginning treatment in the National Institute on Drug Abuse Collaborative Cocaine Treatment Study (Weiss et al., 1996) and to promote long-term abstinence, with AA participation during the second and third year following treatment improving the likelihood of abstinence (Bond, Kaskutas, & Weisner, 2003).