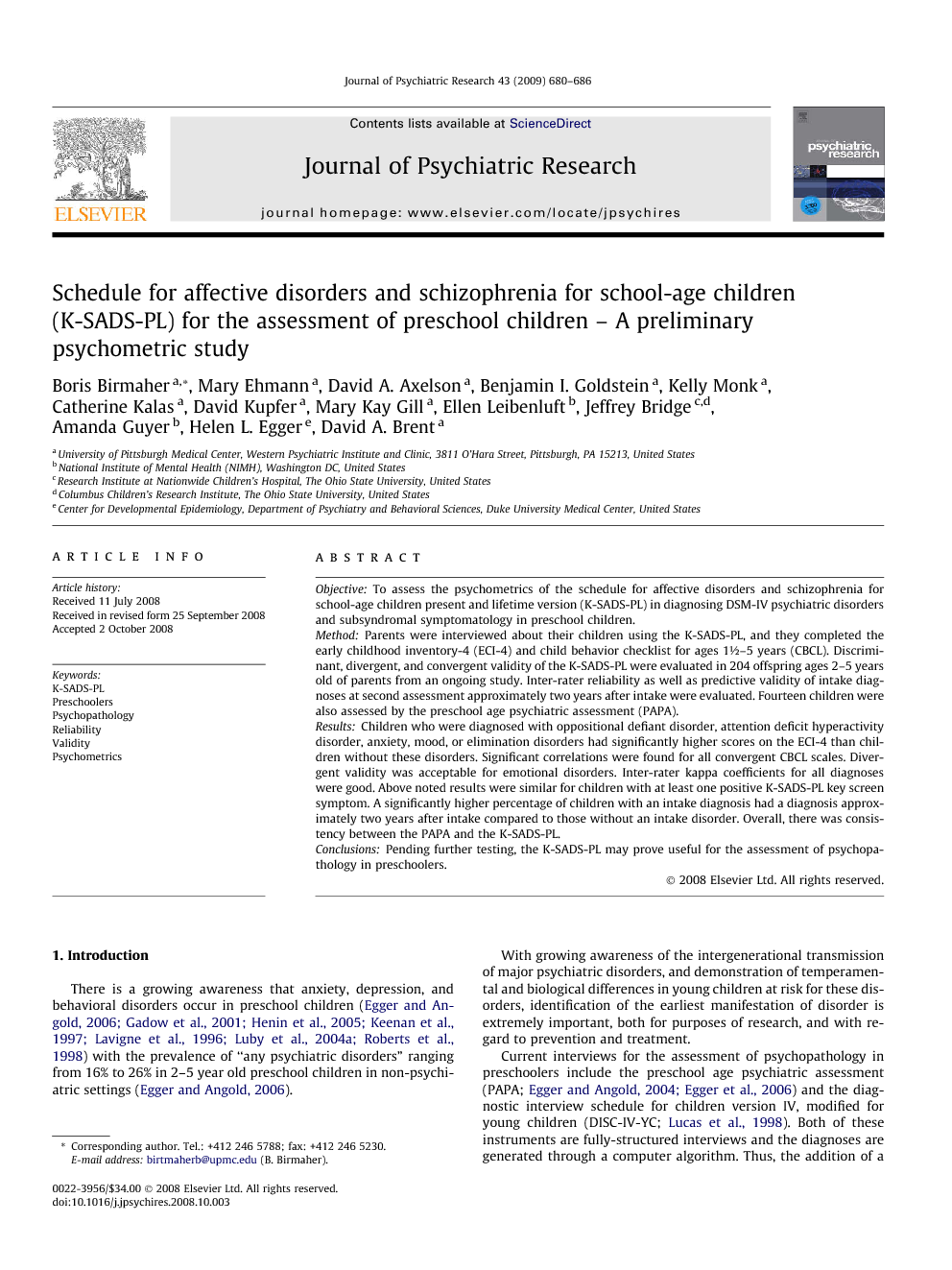 To assess the psychometrics of the schedule for affective disorders and schizophrenia for school-age children present and lifetime version (K-SADS-PL) in diagnosing DSM-IV psychiatric disorders and subsyndromal symptomatology in preschool children.

There is a growing awareness that anxiety, depression, and behavioral disorders occur in preschool children (Egger and Angold, 2006, Gadow et al., 2001, Henin et al., 2005, Keenan et al., 1997, Lavigne et al., 1996, Luby et al., 2004a and Roberts et al., 1998) with the prevalence of “any psychiatric disorders” ranging from 16% to 26% in 2–5 year old preschool children in non-psychiatric settings (Egger and Angold, 2006). With growing awareness of the intergenerational transmission of major psychiatric disorders, and demonstration of temperamental and biological differences in young children at risk for these disorders, identification of the earliest manifestation of disorder is extremely important, both for purposes of research, and with regard to prevention and treatment. Current interviews for the assessment of psychopathology in preschoolers include the preschool age psychiatric assessment (PAPA; Egger and Angold, 2004 and Egger et al., 2006) and the diagnostic interview schedule for children version IV, modified for young children (DISC-IV-YC; Lucas et al., 1998). Both of these instruments are fully-structured interviews and the diagnoses are generated through a computer algorithm. Thus, the addition of a semi-structured diagnostic interview which mimics the regular clinical interview and whose final diagnoses are done through a diagnostic consensus, such as the schedule for affective disorders and schizophrenia for school-age children present and lifetime version (K-SADS-PL) (Kaufman et al., 1997), will give extra flexibility to the clinicians/researchers to further evaluate the differential diagnosis of each symptom in the context of the normal development and the environment of the child. This would provide a valuable additional tool for the assessment of psychopathology in preschoolers. Moreover, since the K-SADS is widely used for children and adolescents ages 6–18 years old, using the same instrument to longitudinally assess a child from the preschool years through adolescence would enhance data collection and analysis. The use of the K-SADS in preschoolers would therefore reduce method variance in trying to establish continuity and discontinuity between preschool and later childhood conditions, and also would be useful in defining the limits of phenotypes, given emerging evidence of very early manifestations of anxiety, mood, and other disorders (Egger and Angold, 2006). The K-SADS-P (present version) has been used to ascertain specific diagnoses including oppositional defiant disorder (ODD) and conduct disorder (CD) (Keenan and Wakschlag, 2004 and Kim-Cohen et al., 2005); attention deficit hyperactivity disorder (ADHD) (Lahey et al., 1998); major depressive disorder (MDD) (Luby et al., 2003), dysthymic disorder (Kashani et al., 1997), and post-traumatic stress disorder (PTSD) (Scheeringa et al., 2001). Also, few studies have used the K-SADS-E (epidemiological version) (Orvaschel, 1994) as a tool to interview parents about possible psychopathology in preschool children (Keenan and Wakschlag, 2004 and Henin et al., 2005). However, with the exception for the psychometrics of the K-SADS-P for some of the above-noted specific disorders, the psychometrics of the K-SADS-PL for the ascertainment of psychiatric disorders in preschoolers has not been widely evaluated. The purpose of this pilot study was to extend prior K-SADS preschool studies assessing the psychometrics for general psychopathology of preschool children as reported by their parents using the K-SADS-PL. Since it is important not to only evaluate the convergent and divergent validity of the diagnoses generated through the K-SADS-PL against instruments that yield categorical diagnoses such as the early childhood inventory-4 (ECI-4) (Gadow and Sprafkin, 1997, Gadow et al., 2001 and Sprafkin et al., 2002), the K-SADS-PL will be compared with a dimensional instrument, the child behavior checklist for ages 1½–5 years (CBCL; Achenbach and Rescorla, 2000). This is particularly important because clinically significant individual symptoms that present at an early age but do not meet full threshold for a diagnostic and statistical manual-IV (DSM-IV; APA, 1994) disorder may herald the development of future syndromic psychopathology. For the same reason, we will also evaluate the psychometrics of the K-SADS-PL screens (see Section 2). It was hypothesized that the K-SADS-PL will show good psychometric properties and could be reliably used with preschoolers. Children with mood/anxiety symptoms will show similar diagnoses in the ECI-4 and significantly higher scores in the internalizing and respective subscales of the CBCL, and lower scores in the externalizing subscales of the CBCL. In contrast, children with behavioral disorders will have higher scores on the externalizing subscale of the CBCL and more disruptive disorders in the ECI-4.